This new product category looks like a success for Chipzilla.

Chip giant Intel (INTC 1.25%) has been increasingly focused on its nonvolatile memory solutions group, or NSG for short. NSG sells storage drives based on NAND flash and 3D XPoint (both are nonvolatile memories, or memories that retain their contents even when power to them is removed).

One product that Intel launched last year was Optane Memory. Optane devices are storage drives based on the company's 3D XPoint technology (which is pricier but faster than NAND flash) that Intel pitches as a "system acceleration solution." 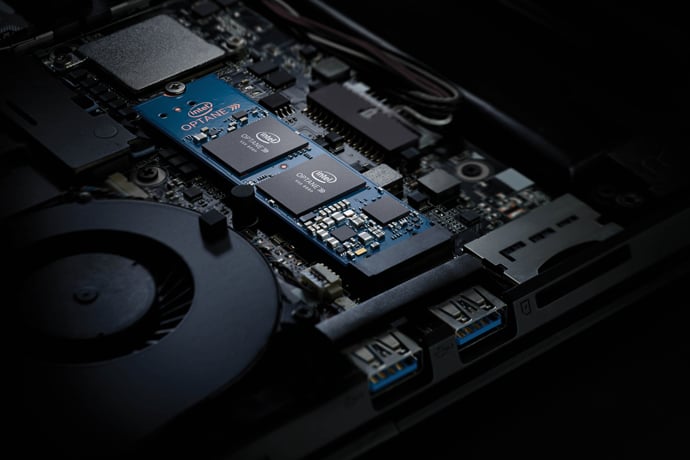 "It can store commonly used data and programs closer to the processor so the system can access information more quickly with improved overall system responsiveness," Intel wrote in a frequently-asked-questions page for Optane Memory.

From a big-picture point of view, Optane Memory is interesting because it allows Intel to sell more products into personal computers, thereby increasing its revenue per machine.

The Optane Memory modules aren't going to be interesting for every type of computer; higher-end machines, for example, with large and fast solid-state storage drives, aren't likely to benefit from Optane Memory.

However, what I've seen is lower-end and mid-range computers -- systems that would typically ship with slow hard disk drives for cost reasons (hard disk drives are much cheaper for a given amount of storage than NAND flash-based solid-state drives) -- being paired with Optane Memory to boost performance.

According to a review of Optane Memory by PCWorld, the Optane Memory technology works pretty well, writing that Optane Memory "will make a world of difference for users stuck with traditional hard drives."

The product clearly has merit.

However, having a good product isn't enough; Intel and its partners need to do a good job of marketing the technology to system buyers to drive up adoption.

Intel seems to be doing its part by adding a "+" to the processor branding of any system that uses its Optane Memory. So, for example, if a computer comes with an Intel Core i5 processor and also includes Optane Memory, it'll be marketed as a system with a "Core i5+" processor.

That's probably a good marketing move, as that branding makes it easy for potential customers to know that the systems with the "+" processors are supposed to be better than their non-"+" counterparts.

The financial impact -- and beyond

Intel's Optane Memory modules aren't expensive products; Amazon.com sells the 16GB variant for about $34 and the 32GB version for roughly $58.

I also wouldn't be surprised if most of Intel's Optane Memory module shipments weren't to end users buying parts from online retailers but, instead, to large computer vendors who buy them in very large quantities.

If we assume that Intel's average Optane Memory selling price is on the order of $25, then the "more than 1 million" units that the chip giant sold last quarter would've translated into somewhere in the vicinity of $25 million in revenue.

Optane Memory simply isn't having a huge impact on Intel's financial performance today, and it's unlikely to ever be the main growth driver for Intel's nonvolatile segment. However, since Intel is building the core technology to support its high-end PC and data-center solid-state drives anyway, it doesn't hurt the company to try to leverage it as an acceleration solution both to increase its own revenue and to help its partners build better computers.

John Mackey, CEO of Whole Foods Market, an Amazon subsidiary, is a member of The Motley Fool's board of directors. Ashraf Eassa has no position in any of the stocks mentioned. The Motley Fool owns shares of and recommends Amazon. The Motley Fool has a disclosure policy.