The outspoken CEO is understandably excited about the company's future.

T-Mobile (TMUS -1.32%) reported its second-quarter 2018 results recently, and the company continued to prove that its unconventional approach to the wireless market is working. T-Mobile's earnings reached $782 million, or $0.92 per share, up 35% from the year-ago quarter, and outpacing Wall Street's consensus estimate of $0.87.

The company's revenue of $10.57 billion fell slightly short of analysts' consensus estimate of $10.64 billion, but there was still plenty for T-Mobile's investors to be happy about. T-Mobile CEO John Legere said the company's customer growth continued to surge, that the carrier is moving ahead quickly with its 5G plans, and that its pending merger with Sprint (S) could create a dominant wireless carrier offering more options to consumers. 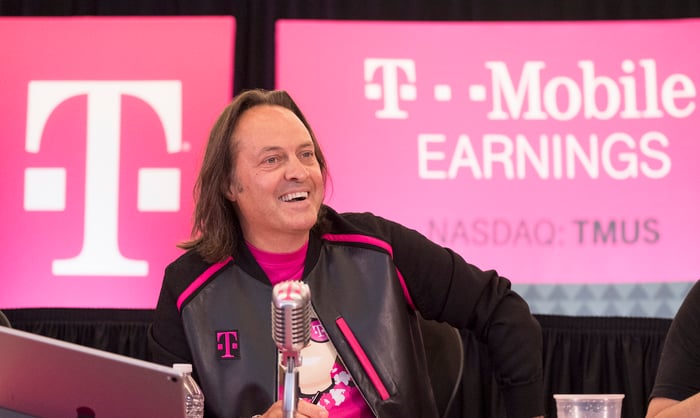 It's no secret that T-Mobile's subscriber growth has been surging over the past few years and the company continued the trend in the second quarter with 1.6 million total net additions, which marked 21 consecutive quarters of more than 1 million net additions. An impressive 686,000 of those were branded postpaid phone net additions.

"With 686,000 branded postpaid phone net additions, we captured about two-thirds of the industry's postpaid phone growth, grew nearly two times faster than Verizon, AT&T, Sprint, and Comcast combined and more than three times faster than our next closest competitor, Comcast," Legere said. "And we grew faster sequentially and year over year. So who says we're slowing down?" (bold added)

New phone plans that focus on users in the military and veterans, users over 55 years of age, as well as increased customers in the business segment helped drive subscriber growth.

Strong customer growth in the second quarter led T-Mobile to increase its estimates for 2018 branded postpaid net customer additions to be between 3 million and 3.6 million, up from the previous forecast of 2.6 million to 3.3 million.

T-Mobile has been talking about its upcoming 5G network a lot lately and the second-quarter earnings call was no exception. Legere mentioned that the company's 600 megahertz spectrum hardware that's being deployed now would be "upgradable to 5G with a software update" when the time comes.

"Our plan continues to be to bring 5G to 30 cities in 2018 starting with New York, L.A., Dallas, Las Vegas, with nationwide coverage coming in 2020," Legere said. "This network will utilize 600 megahertz and will harness 4G and 5G bandwidth simultaneously for dual connectivity, and we'll be ready for the first 5G smartphones in 2019."

T-Mobile's 5G plans will include connectivity for more than just mobile devices.

"... [T]his 5G network is a network where we intend to plunge into broadband, not just mobile connections like today, but into in-home broadband, because this network has the depth and breadth of 5G, that's simply unprecedented in the market," Sievert said.

You may recall that T-Mobile recently made a deal to buy hardware and services from Nokia -- to the tune of $3.5 billion -- to help get its 5G network up and running over the next couple of years. That's important because the global 5G market will be worth an estimated $251 billion by 2026, and early leaders in this space could gain an advantage over their competitors.

3. T-Mobile continues to focus on its pending merger with Sprint

At the end of April, T-Mobile and Sprint announced that they intended to merge and hope to close the deal in the first half of 2019. There are still plenty of questions as to whether or not the merger will pass regulatory approval, but that isn't stopping Legere and the rest of T-Mobile's management from making the case as to why they think the combined company will be great for consumers.

"While we still have a number of steps remaining in the regulatory approval process, we are optimistic and confident that regulators will recognize the significant pro-competitive benefits of this combination and grant regulatory approval," Legere said. "I think we made it clear that this merger is pro-consumer and all about supercharging the Un-carrier and about bringing broad and deep nationwide 5G to Americans as fast as possible."

"We've been very, very pleased from day one with the story that we're providing as to why the coming together with Sprint is pro-competition, pro-consumer, pro-America, very critical from many aspects, especially the deployment of 5G capability," Legere said.

Whether the U.S. government agrees with Legere remains to be seen. But for now, T-Mobile investors should be very pleased with the company's fantastic customer growth and its focus on launching a robust 5G network. If the merger with Sprint does end up becoming a reality, it'll be the icing on the cake that T-Mobile's already baking.