Please ensure Javascript is enabled for purposes of website accessibility
Log In Help Join The Motley Fool
Free Article Join Over 1 Million Premium Members And Get More In-Depth Stock Guidance and Research
By Daniel B. Kline - May 29, 2018 at 7:48AM

Prospects for the brand are limited, but some exist.

While Sprint (S) has an all-stock deal in place to merge with T-Mobile (TMUS -2.57%), there are significant doubts that federal regulators will approve it. If that happens, T-Mobile will go back to its fight against Verizon (VZ -0.98%) and AT&T (T -0.82%), with perhaps some added maverick credibility.

Sprint, however, will be in a much worse spot. The company stabilized under former CEO Marcelo Claure, who has taken a new role as executive chairman, but it's still the fourth-place wireless carrier and has limited prospects to improve its position. 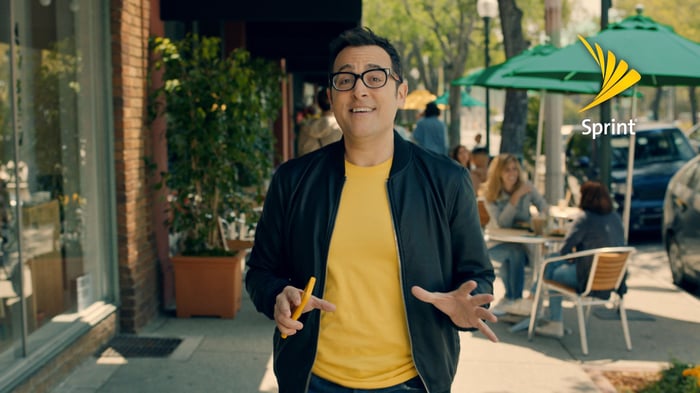 After multiple failed attempts at merging, the number three and four wireless carriers have reached a deal wherein Sprint shareholders receive 0.10256 shares of T-Mobile for each Sprint share or 9.75 Sprint shares for each T-Mobile share. That puts Sprint's enterprise value at $59 billion, and the value of the combined company at $146 billion.

The new entity will be called T-Mobile; no decision has been made yet as to whether the Sprint brand will continue to exist. T-Mobile CEO John Legere will lead the new company, and Claure will serve on its board.

Should the deal be approved, the combined company would be able to save about $6 billion each year through cost synergies. It would also be in a better position when it comes to the costs and spectrum needed to build out its next-generation 5G network.

Under President Barack Obama, federal regulators made it very clear that they would not approve any deal that took Sprint, T-Mobile or, in less-likely scenarios, AT&T or Verizon off the board. Now, however, it can be argued that cable companies have entered the wireless space, making the big four perhaps less important to overall competition.

That's at least part of the argument Sprint and T-Mobile plan to make: Without combining, they won't be able to take on AT&T and Verizon. For Sprint, that might indeed be the case.

What happens to Sprint if the deal gets denied?

If federal regulators deny the deal or ask for concessions that make T-Mobile walk away, Sprint will be in a challenging position. The capital commitments necessary to remain competitive are significant, and the company has only been able to raise its subscriber count by offering extreme discounts.

Thus on its own Sprint would face very long odds. That makes it likely the company would pursue another merger, or at least a strong strategic alliance. Perhaps the most-logical partner would be DISH Network (DISH -3.77%). Both companies are in the subscription business, and 5G might be a viable method for delivering DISH's Sling TV live-streaming television service.

Other merger possibilities would include two big cable companies that have put toes into the wireless space, Comcast and Charter. Sprint had explored a merger or significant partnership with each company after its previous attempt at a T-Mobile deal through an exclusive negotiating period in the summer of 2017.

The number-four wireless carrier needs a partner: If it stays on its own, it risks being spent out of existence by its three more-successful rivals.

Sprint on its own has no identity. It isn't the maverick outsider like T-Mobile, nor is it the bastion of quality that consumers believe AT&T and Verizon are. On its own, Sprint is the company that will give you really cheap prices, and that's not a tenable long-term strategy.

If the T-Mobile deal does not happen, Sprint will have to find a new partner. There aren't many good choices, so the deal may not be all that favorable -- but at least the company will likely have some suitors.