In the second quarter, the 3D printing company's revenue jumped 11%, but adjusted earnings per share declined 25%.

3D Systems (DDD -1.77%) released its second-quarter 2018 financial results after the market close on Tuesday. The diversified 3D printing company's revenue grew nearly 11% year over year, driven by strength in 3D printer sales and healthcare. On a GAAP basis, its loss per share was flat with the year-ago period, while, on an adjusted basis, its earnings per share (EPS) declined 25%.

Shares soared 19.4% in after-hours trading on Tuesday, which we can attribute to both revenue and adjusted EPS coming in better than most investors were likely expecting.

GAAP gross margin was 48.8%, down from 50.6% in the year-ago quarter. The company attributed the decrease to the "impact of mix of sales and investment in services and on-demand manufacturing [offsetting] cost improvements from ongoing supply chain cost reduction initiatives."

3D Systems generated $10.7 million of cash from operations and ended the quarter with $119.3 million in unrestricted cash and cash equivalents on hand.

For context -- though long-term investors shouldn't pay too much attention to Wall Street's near-term estimates -- analysts had been looking for adjusted EPS of $0.01 on revenue of $165.9 million, so the company comfortably beat the revenue consensus and crushed the bottom-line expectation. 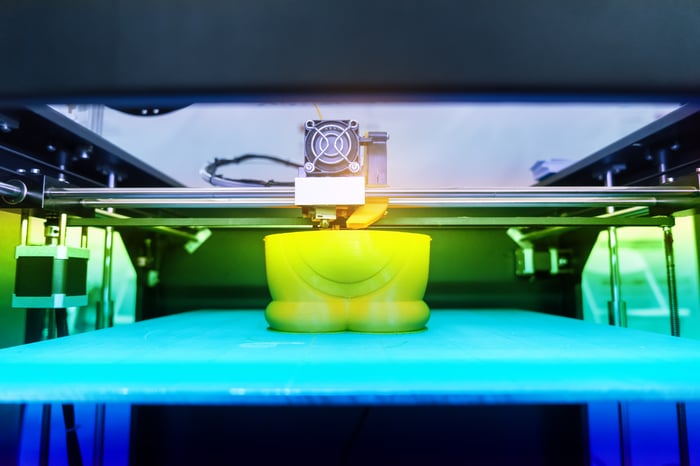 Management reviewed on the earnings call how key categories performed:

3D Systems' healthcare business has long been its standout performer, so the robust 26% growth wasn't much of a surprise. Notably, this is entirely organic revenue growth, or growth from businesses owned for at least one year. For the past five quarters, the company's first-quarter 2017 acquisition of a dental materials maker had been obscuring organic revenue growth.

As with last quarter, the magnitude of the increase in 3D printer revenue likely came as a pleasant surprise to many investors. Last quarter, this metric increased 24% year over year, so we saw an acceleration of growth in the second quarter. These two increases follow a flat result in the fourth quarter of last year, preceded by a three-year stretch of year-over-year declines. 3D printer sales are central to the company's razor-and-blade-like business model because they drive recurring sales of print materials, which sport high profit margins.

As for print materials, revenue went up only 3%, but management reiterated on the earnings call what it said last quarter: The strong improvement in 3D printer sales should start to boost material sales later this year, with the full effect kicking in next year. If and when this happens, investors should see profitability tick up solidly.

Expounding on 3D printer sales, management said on the call that the unnamed Fortune 50 company that had been a beta tester for its speedy, large-scale Figure 4 production system "converted to a sale" in the quarter. The company also began shipping some of its many new products slated for a 2018 rollout, including the FabPro 1000 industrial desktop printer and the ProX SLS 6100.

Here's what CEO Vyomesh Joshi had to say in the press release:

We are pleased with our results for the second quarter, which were driven by strong revenue growth, including growth in both printer revenue and units as we continue to improve execution and are seeing the early returns on our investments in both innovation and go-to-market.

In addition to our performance in the second quarter, we are also very pleased to be partnering with Georg Fisher [yes, "Georg -- no "e"], a highly regarded leader in machining solutions, to create new integrated solutions and expand our global network and market opportunity. With our product rollouts in 2018, we believe our portfolio is second to none in regards to breadth and competitiveness, and we continue to be keenly focused on execution and operational efficiency to drive long-term growth and profitability.

As to the Georg Fisher partnership announced on Tuesday, the companies said in the press release that the teaming "will [combine] the strength of 3D Systems' innovation and expertise in additive manufacturing with GF Machining Solutions' renowned leadership in precision machining" to "enable manufacturers to more efficiently produce complex metal parts within tight tolerances, and reduce total cost of operation."

Much like last quarter, results for 3D Systems were largely a mixed bag. The big positives were once again strength in both 3D printer and healthcare revenue. However, as with last quarter, the year-over-year growth in revenue was accompanied by weaker key profitability metrics, namely GAAP gross margin and adjusted earnings. Unlike last quarter, though, GAAP net income -- which is negative -- didn't decline year over year but held its own.

Management said in the earnings presentation that "[t]roughout the remainder of 2018, we expect to start shipping modular Figure 4
systems, as well as the DMP 350 and large frame DMP 500 systems."

Editor's note: A previous version of this article misstated the year-over-year change in service revenue as 10.7% instead of 6.3%, and in total segment revenue as 11.7% instead of 10.7%. The Fool regrets the error.