The pharmacy services giant reported strong prescription volume growth in the second quarter but a big writedown for its struggling LTC business.

When CVS Health Corporation (CVS -0.48%) reported its first-quarter results in May, there was a reversal of sorts. The company's pharmacy services segment, which includes its pharmacy benefits management (PBM) business, usually generates faster growth than the retail/long-term care (LTC) segment does. But it was the other way around in the first quarter.

CVS Health announced its second-quarter earnings results before the market opened on Wednesday. The company again posted better-than-expected earnings thanks to retail/LTC segment growth but faced a problem with its LTC business. Here are the highlights from CVS Health's second-quarter update. 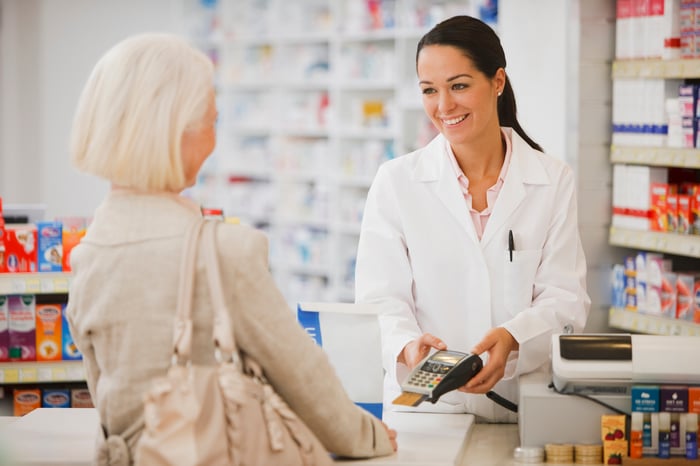 The calendar didn't hurt the company too much, though. CVS Health's retail/LTC segment posted first-quarter revenue of $20.7 billion, up 5.7% from the prior-year period. Although the Omnicare LTC pharmacy business continued to struggle, CVS Health's retail stores performed exceptionally well in the quarter.

As expected, front-store same-store sales declined 1% year over year largely due to the impact of the timing of the Easter holiday. But pharmacy prescription volume jumped 9.5% from the prior-year period, helping drive overall same-store sales year-over-year growth of 5.7%. Factors contributing to the higher prescription volume include continued success for CVS Health's patient care programs, alliances with health plans and other PBMs, inclusion in more Medicare Part D networks, and higher brand drug prices.

What's behind CVS Health's second-quarter GAAP net loss? The company recorded a goodwill impairment charge of $3.9 billion because of the weak performance of its Omnicare LTC business. Omnicare continues to face a negative business climate in the LTC industry.

Our solid performance both in the quarter and year-to-date demonstrates our ability to drive value. It also builds upon a strong foundation for a seamless integration of CVS and Aetna with one goal: to transform the consumer healthcare experience and, by doing so, deliver long-term profitable growth for shareholders.

The strong revenue, adjusted EPS, gross and operating margins, along with cash flow generated in the quarter were the direct result of our team's ability to increase prescription growth by expanding relationships with PBMs and health plans as well as our ongoing streamlining efforts and innovation. The genuine enthusiasm and the depth of talent throughout the CVS and Aetna organizations will be key assets as we focus on realizing the potential of our combination.

CVS Health also updated its full-year 2018 guidance. The company expects GAAP EPS between $1.40 and $1.50, well below the previous outlook of GAAP EPS between $5.11 and $5.32. This significant downward revision is due to the impact of the LTC goodwill impairment charge taken in the second quarter.

The biggest thing for investors to look forward to is the potential finalization of CVS Health's acquisition of Aetna. CVS Health anticipates that the deal will close either in the third quarter or early fourth quarter of 2018.