The company is no longer operating its namesake school. Here's why that's OK.

Grand Canyon Education (LOPE 0.44%) has always been an outlier in the world of for-profit education. The school only opted for for-profit status when it ran into troubles in the early 2000s, and it has been able to continue growing while the rest of the industry has been a horror show for the past decade.

On July 1, it became even more unusual. The school -- Grand Canyon University (GCU) -- has once again become a private, non-profit institution. Shareholders who might be left wondering what they own shouldn't be too worried. I'll get to the specifics below. 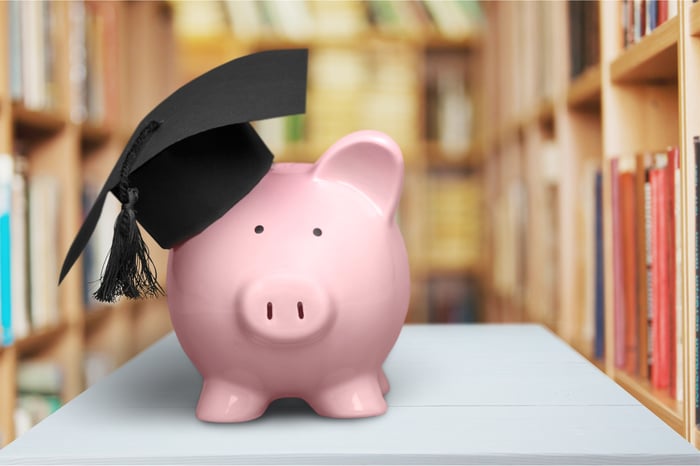 Before diving into the details of the company's recent conversion, let's look at the headline numbers. It's worth mentioning that all of these results are from before GCU splintered off.

These are strong figures across the board, and the fact that earnings continue to grow faster than revenue is another indicator that the school's strategy is working. By putting lots of money into both a physical campus and a Division I athletics program, the school is getting lots of cheap advertising. That's attracting lots of students without spending as much as traditional for-profits on sales and marketing.

The negative free cash flow isn't much to worry about: The summer semester usually brings in much less revenue, and the school is busy building out capital projects while students are off campus.

As for enrollment figures, the results were encouraging.

Again, because so few students take summer classes in the classroom, the online enrollment is what really matters for the second quarter.

Details of the transition

Here's what investors need to know about the decision to separate GCU from Grand Canyon Education (GCE):

Just as important, Brian Mueller -- CEO of Grand Canyon during its impressive turnaround -- will be splitting his roles. He will be the CEO of the GCE services company, as well as president of the not-for-profit GCU.

Grand Canyon will also now have the opportunity to provide such services to other schools -- whether they be for-profit or not-for-profit. However, Mueller said: "In the short term, GCE's goals are to use the people, interconnected processes and advanced technologies that have been built over the last 10 years to enable its only current customer, GCU, to be the most productive, efficient and therefore premier teaching institution in America."

Mueller also noted that within the next six months, GCE would be reaching out to other institutions of higher learning to gauge interest. Specifically, GCE thinks that its experience in building out automated financial aid processing could be a valuable service to many colleges and universities.

Investors will have to wait at least two quarters, however, to get a better idea of how this might play out.

While revenue figures will be very different moving forward, GCE's operating margins should improve dramatically after handing off the costs associated with capital build-outs on campus and staff salaries. Management provided the following forecast for the rest of the year.

Investors should keep a close eye on GCE's ability to forge contracts with new schools, as it could provide a major opportunity for GCE to transition into a large-scale provider of educational services.