The kitchen equipment manufacturer missed on earnings. Or maybe it didn't. Either way, Wall Street is feeling only cautiously optimistic about the stock.

Middleby (MIDD 0.39%) reported Q2 2018 earnings on Wednesday. The results can best be described as mixed, and although investors rushed to buy the stock after earnings, Wall Street's reaction to the news has been something less than enthusiastic.

On the one hand, the kitchen equipment specialist seems to have missed on earnings. On the other hand, Middleby clearly beat on revenue. Plus, there's no denying that Middleby's numbers showed improvement since last year's Q2. 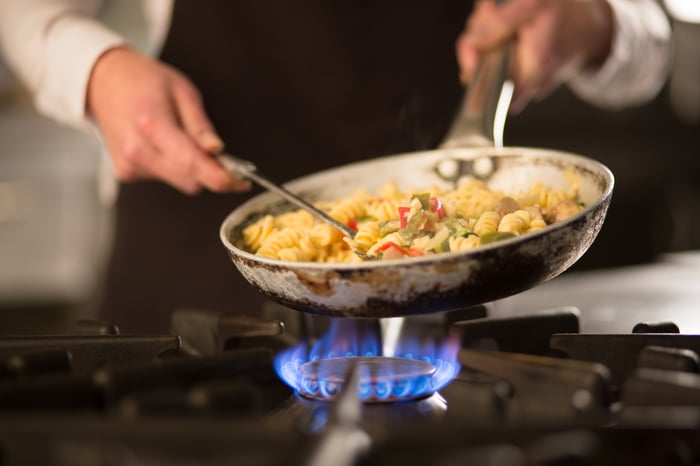 Investors differ on whether Middleby beat or missed earnings last quarter -- with opinions mostly hinging on whether you think the company should be graded on its adjusted earnings per share of $1.63 or on its actual GAAP profit of $1.51 per share. (For the record, Middleby itself emphasized the GAAP number -- and kudos to it for that -- only adding color on the quarter's separate one-time costs after the fact.)

Regardless of which flavor of earnings you prefer, Middleby has reported $146.6 million in cash generated from its operations through the end of H1 2018 -- a 70% increase year over year -- which is pretty substantial improvement if you ask me.

And yet, Wall Street's reaction to the good news was decidedly muted. Deutsche Bank, which already had a buy rating on the stock and a $110 price target, raised its 12-month target to $120, reports StreetInsider.com (subscription required) -- just 2.5% above what Middleby stock already costs today.

Yesterday afternoon a second analyst chimed in, this time Wellington Shields. But all it could muster was an upgrade from hold to gradually accumulate. (That was a new phrasing to me, by the way, but I'd suggest you might translate Wellington's advice to "buy on the dips.")

With Middleby posting strong sales growth, though, nearly as strong earnings growth, and continuing to add to its stable of brands, which already includes such names as Taylor, Viking, and TurboChef, why isn't Wall Street's endorsement of the stock more enthusiastic?

A couple possibilities suggest themselves, the most obvious being valuation.

Priced at nearly 22 times trailing earnings -- or more than 28 times earnings, adjusted to factor in the company's $2 billion in net debt -- Middleby stock is hardly a cheap stock. Analysts polled by S&P Global Market Intelligence only see the company growing earnings at about 12% annually over the next five years, a estimate that's reinforced by the fact that that's exactly how fast Middleby grew earnings in Q2.

Nor can you argue that Middleby is substantially cheaper when valued on free cash flow instead of GAAP profits. Middleby didn't include a complete cash flow statement with its Q2 report, but did include this information in its 10-Q filing with the SEC. There we find that free cash flow for the first half of 2018 was $124.4 million. Added to the $195.7 million generated in H2 2017, that makes for trailing-12-month free cash flow of $320.1 million, which gives Middleby an enterprise value-to-free-cash-flow ratio of 25.6. That's not quite as expensive as the GAAP numbers make Middleby stock look -- but it still isn't cheap.

A second factor that may be causing analysts to hesitate before endorsing Middleby: The restaurant sector, which Middleby sells into, isn't exactly red-hot right now. Market researcher TDn2K reports that restaurant sales posted a second consecutive month of improving same-restaurant sales in July. However, the 0.5% improvement was just half the 1% increase seen in June. This suggests that sales growth in restaurants is both weak, and weakening, which isn't great news for Middleby's own sales growth prospects.

On top of that, TDn2K noted that July 2017 sales were "terrible," such that ordinarily, you'd have expected a much stronger same-restaurant sales result a year after. The fact that growth didn't pop more strongly means that "the small uptick in sales in July is far from being cause for celebration given the extremely easy comparison."

Maybe if analysts are being cautious about recommending Middleby stock, they've got a good reason to be.

Why Coca-Cola Stock, Middleby, and Even Beyond Meat Stock Rose Wednesday
397%