It's been more than a year since NxStage Medical (NXTM) accepted an acquisition bid from Fresenius Medical Care (FMS 0.16%). Investors have looked forward to the $30 per share in cash that Fresenius offered, but there've been countless delays in the process that everyone had hoped would be over by now. Indeed, with an Aug. 7 deadline under the terms of the deal, some investors had started to get more nervous about whether the acquisition would happen at all.

Over the past couple of weeks, two SEC filings from NxStage have provided more color on where the dialysis specialist is headed. With the successful extension of Fresenius' merger agreement through Nov. 5, NxStage got some more time to get the deal approved and done. Meanwhile, it's becoming increasingly clear that NxStage could see a big drop if anything happens to threaten the Fresenius buyout, because even with significant revenue gains, the company is still having trouble reaching profitability. 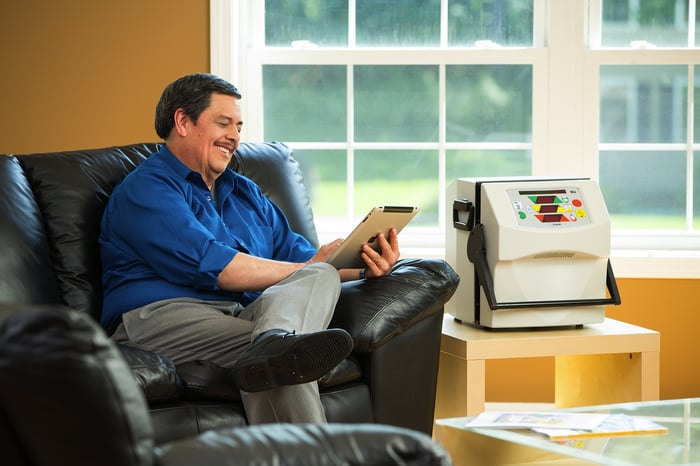 NxStage Medical's second-quarter results suggested that the company continues to tread water. Revenue rose 11% to $107 million, matching the growth rate from the first quarter of 2018. Yet once again, net losses widened, with $2.59 million in red ink working out to $0.04 per share, $0.01 worse than last year's second-quarter net loss.

Looking more closely at the numbers, total revenue from the key System One segment was also higher by 11%. Contributions from its home-use and critical care components were balanced, showing NxStage's commitment to both revenue streams to support the System One platform. Gains for the in-center segment, meanwhile, were slightly larger, with sales growth of 14% from year-earlier levels. Slight declines in the miscellaneous other products category held back NxStage slightly, and the services segment saw slower growth of just 7% over the period.

Yet as we've seen before, making money proved more difficult. Operating income from the combined System One and in-center units rose just 6%, and the services segment saw only a slight reduction in operating losses compared to year-ago figures. In addition, noncontrolling interests sapped more of the company's earnings than in the past year's second quarter, creating a larger hit to the bottom line for NxStage shareholders.

NxStage continued to rely on two key customers. DaVita (DVA 0.97%) saw its share of purchases fall by a percentage point to 19%, while Fresenius climbed a point to 21%. Those numbers have stayed at that general level for an extended period.

Will the deal go through?

Over the past few months, investors have gotten a little more optimistic about the chances of the Fresenius buyout happening. The current discount to the $30 per share cash buyout price has narrowed to between 5% and 6%, compared to more than 10% as recently as late May.

Part of the reason for rising sentiment is that NxStage has taken concrete steps to try to avoid any antitrust issues. In mid-July, the company agreed to sell its Medisystems bloodlines business to renal therapy specialist B. Braun Medical. B. Braun has sold NxStage products for a long time, but the company is excited about the ability to integrate the product line as a complement to its own legacy equipment, including the Dialog hemodialysis machine and the Diacap dialyzer. The deal is contingent on the Fresenius merger going through, and NxStage hopes the Federal Trade Commission will see the move as an attempt to make the Fresenius deal as clean as possible from an antitrust perspective.

NxStage investors have to be pleased that Fresenius was willing to extend its deadline, but a lot depends on how quickly the FTC can move forward in evaluating the deal. Hopefully, the next few months will bring more definitive information on what, if any, concerns regulators have and whether NxStage and Fresenius are likely to be able to address them effectively.