The month of July alleviated a big fear that investors in CSX were hanging on to.

An otherwise quiet July turned out to be a blockbuster month by the end for CSX Corporation (CSX -1.05%), as shares of the railroad zoomed 10.8%, according to data provided by S&P Global Market Intelligence, to hit all-time highs.

It wasn't just quarterly numbers. CSX's earnings report seems to have addressed one of the biggest fears in investors' minds: How will the company grow after the sudden death of railroad veteran and CEO Hunter Harrison late last year?

While strong demand from key end markets like coal, chemicals, and automotive drove CSX's sales higher, the last point above is most important, as operating ratio is a key measure of a railroad's efficiency. The dramatic drop in CSX's operating ratio means the company incurred substantially lower operating costs as a percentage of revenue, which is a great sign. In fact, that brings CSX almost at par with Canadian National Railway, the most cost-efficient U.S. Class 1 railroad. 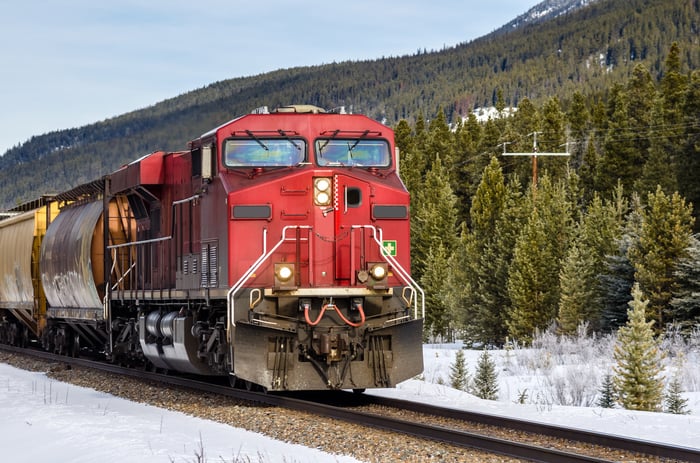 What matters is that company initiatives, and not macro factors like fuel prices, essentially drove costs lower. So CSX's labor costs, for example, declined 11% in Q2, thanks to a lower headcount and fewer crew starts, all of which are part of CSX's scheduled railroading model, one it's been pushing aggressively in recent quarters.

The market was quick to applaud CSX's estimate-beating performance and sent the stock soaring.

After CSX's Q2 performance, investors should be able to trust CEO James Foote's capabilities in leading the railroad to new heights that it might have expected to achieve under Harrison's leadership. Also, the company's record operating ratio places it firmly on target to sustain the metric at 60% or lower by 2020.

As Foote stressed during CSX's Q2 earnings call conference, developing "long-term sustainable growth" is a priority, and the company is working hard to become the "best-run railroad in North America." Watch this stock closely, investors.