Please ensure Javascript is enabled for purposes of website accessibility
Log In Help Join The Motley Fool
Free Article
Join Nearly 1 Million Premium Members And Get More In-Depth Stock Guidance and Research
By Daniel B. Kline – Aug 12, 2018 at 6:33AM

The company wants the public on its side when it comes to its merger with Sprint.

T-Mobile (TMUS 0.23%) faces a bruising battle with federal regulators to get its merger with Sprint (S) approved. The key argument the company has made, part of a broader case that the merger is actually needed to compete with Verizon and AT&T, is that joining forces will allow the combined company to quickly build out a 5G network.

That idea was literally the headline of the press release announcing the deal: "T-Mobile and Sprint to Combine, Accelerating 5G Innovation & Increasing Competition." And if that wasn't clear enough, the first of four subheads was "Creates Only Company with Network Capacity Needed to Rapidly Launch Nationwide 5G Network with Breadth and Depth Critical to Extend U.S. Global Internet Leadership in the 5G Era."

That's a mouthful, but it's basically T-Mobile saying that allowing it to combine with Sprint would be good for consumers. It's hard to know if that's true, but the company wants to push back on the idea that having three major wireless carriers is worse for consumers than having four.

Now, as the merger begins the approval process, T-Mobile wants to make its case to the public. To do that, it's taking to the streets in a "souped-up semi-truck" it's calling the "Tech Experience" which houses the "Launch Pad," which it calls an "interactive showroom on wheels." 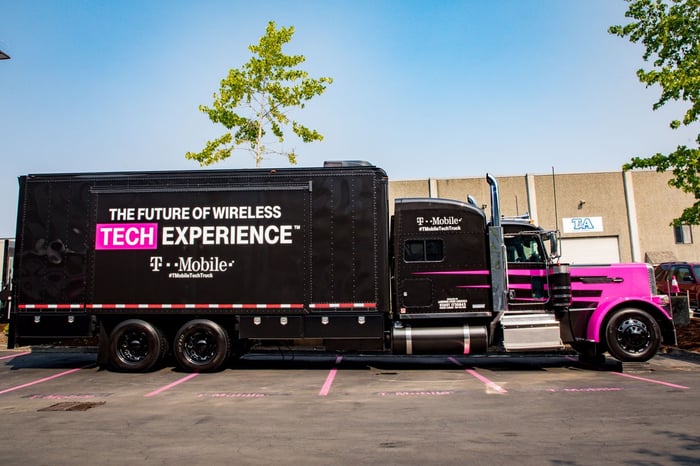 T-Mobile is taking its technology on the road. Image source: T-Mobile.

It's using its mobile "Launch Pad" to show consumers how much better their wireless experience would be with a 5G network. It's a showy way to build grassroots support for the merger that's in line with CEO John Legere's boxing/wrestling promoter instincts in terms of getting attention.

"The T-Mobile Launch Pad lab is the heart of our network innovation and cutting-edge technology," said Legere in a press release. "It's where our engineers design America's fastest 4G LTE network, disrupt the industry, and continue to help architect the future of wireless. 5G is becoming a reality in this building, and everyone's invited to witness it and to see the future for themselves!"

Legere stops short of offering Charlie all the chocolate he can eat for life, but that's roughly the direction he's taking. He wants the public to see how great 5G will be, while making it clear that all these wonders will only be possible if the merger happens.

This is full on carny

Legere stops short of asking people to "step right up" to see all the magic of a 5G world, but he's still acting like a carnival barker. The press release for the traveling road show mentions showing off the benefits of 5G, included lower latency and faster speeds. It then promises demonstrations and the ability to try some of the new technology.

Visitors will better envision a world where EVERYTHING is connected -- where you'll never lose anything again. Connected drones go from novelty to necessary, playing a crucial role in emergencies and forever changing home delivery. Smart cities are brought to life through interactive displays to show how they'll become safer, cleaner and more efficient. Augmented and Virtual Reality (AR & VR) become a part of our everyday lives, revolutionizing the way we communicate.

T-Mobile isn't wrong about 5G's potential. It's also correct that its path to building out a 5G network is easier if it's allowed to buy Sprint -- though it would almost certainly get there eventually even if the deal is not allowed.

Consumer sentiment may well impact government policy on whether this merger should be approved. T-Mobile is doing its part to show the public all the cool stuff that it will get if the deal happens. That's a bit of a PR stunt, but it's a very clever one that ignores the question of whether having three carriers instead of four will lead to higher prices.