There's a clear winner in the market-share fight between these two home-furnishings retailers.

Overstock (OSTK -5.05%) is throwing in the towel. Less than six months after announcing a strategic shift aimed at slowing Wayfair's (W -7.70%) growth in market share, the e-commerce retailer has abandoned that approach. And, in scaling back its marketing spending and price cuts, Overstock is essentially admitting that its competitor's impressive growth rates aren't so easy to replicate.

Wayfair and Overstock target the same demographic of mostly younger shoppers who are open to ordering home furnishings online. Both companies are attracted to the niche, in part because it is fragmented, so there are major benefits in achieving national or global scale. The industry is also one of the fastest-growing segments of e-commerce. 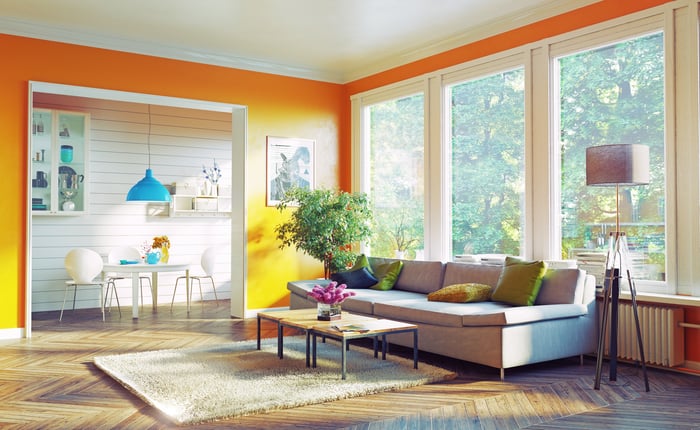 That competitive overlap meant it was bad news for Wayfair when Overstock announced a major strategic shift back in March. Basically, the latter company said it would now target sales growth at the expense of short-term profits.

Overstock management even named Wayfair as a key reason why its retailing business had just posted an annual loss for 2017. Its bigger rival was boosting sales through temporary means like price cuts and advertising, executives argued; now it was time for Overstock to "respond in kind," CEO Patrick Byrne said at the time. "We have already turned on the jets," Byrne continued, "and will demonstrate this year that our growth engine is far more efficient."

Things didn't work out that way. Over the next two quarters, Overstock lost more money as it increased marketing and pricing investments. Pre-tax loss expanded to $57 million in the most recent quarter, from $37 million in the fiscal first quarter.

But that strategy didn't put a dent in Wayfair's growth rate. Instead, the company beat expectations in its first two reports of 2018, with sales growth approaching 50% in each period. By comparison, Overstock's expansion pace was 12% in the most recent quarter and 3% in fiscal Q1.

Wayfair didn't have to slash prices or boost its marketing spending, either. The retailer's gross profit margin has been holding steady at 24% of sales all year, and advertising costs actually dipped last quarter, down to 10.7% of sales from 11.1% a year ago. Its U.S. business is still operating at just below breakeven, while its younger international segment posts more significant losses.

The same as it ever was

Those few months of results were all that Overstock needed to decide it was time to give up on its retailing shift. Its management said this week that it started reverting to its old marketing approach in July, and will speed that change up over the next few months. Overstock is "switch[ing] to a strategy that deemphasizes growth and instead emphasizes sharply reduced cash-burn," Byrne explained. And, just like that, the competitive dynamics in the industry have become a bit easier for Wayfair and its peers.

Since Overstock's price cuts didn't have much of an impact on Wayfair's business, Wayfair investors shouldn't expect a big positive bump for the company now. Still, it's always good news when a rival tamps down its aggressive posture.

The entire experiment, meanwhile, suggests Wayfair's growth has more to do with fundamental drivers like improving the shopping experience for home furnishings than with offering unsustainably low prices. If it was that simple, rivals like Overstock wouldn't be finding it so hard to duplicate Wayfair's successes.

Why Wayfair Stock Is Skyrocketing Today
413%