The recent tariffs on liquefied natural gas from the U.S. to China haven't lessened Cheniere's management appetite to expand operations.

One of the fastest-growing segments of the oil and gas industry in recent years has been liquefied natural gas (LNG) fueled mostly by rapidly growing demand in China. Cheniere Energy (LNG 0.52%) has benefited both directly and indirectly from China's demand, but there are fears that U.S.-based LNG could hit a speed bump now that China has slapped a 25% tariff on LNG imports from the U.S.

Based on Cheniere's second-quarter results, management's comments, and its slew of announcements to expand operations, those fears don't look to be having much of an impact on Cheniere's future plans. Let's take a look at the company's most recent results and the moves it's made recently to assuage any fears of the China trade spat.

Compared to the prior quarter, Cheniere's second-quarter results look somewhat discouraging at first. There are, however, a couple things to consider here. One is that natural gas demand is incredibly high in the first quarter as demand for home heating is high in the winter months. Also, management noted that there was some scheduled downtime for maintenance at a couple of its liquefaction process trains that limited supply.

The one thing that was a little discouraging was that the downtime took a little longer than expected. The one positive note here is that it happened at a slower time of the year for gas demand. Despite the lower results for the quarter, management was confident enough to raise the low end of its guidance for distributable cash flow from subsidiary Cheniere Energy Partners (CQP 0.06%) from $0.35 billion to $0.4 billion.

Management was able to cover up some of these less-than-spectacular results with a bevy of announcements that are all positive long-term catalysts. The first this past quarter was that it made a final investment decision on the third process train at its Corpus Christi, Texas, facility. The $3.2 billion expansion project will add another 1.5 million tons per year of export capacity and will be complete in the second half of 2021.

It also announced the day of its earnings release that it had secured a contract to supply the Taiwanese national oil company, CPC Corp., with 2 million tons per year of LNG for 25 years starting in 2021. Also, after grappling with the issue for several quarters, management was finally able to finalize a deal to acquire the remaining shares outstanding in Cheniere Energy Partners Holdings (NYSEMKT: CQH). Management made an initial offer to acquire the subsidiary holding company back in 2016 as a way to simplify its corporate structure, but it was hung up in a conflicts committee with the board for some time. The new deal is now finalized and set to close this quarter.

On top of the third train expansion at Corpus Christi, Cheniere says it's close to making a final investment decision on a sixth process train at it Sabine Pass, Louisiana, facility. The expansion project has all of the necessary permits and management is marketing commercial contracts and looking to finalize an engineering and construction contract. Beyond train six at Sabine Pass, there are no definitive expansion plans, but Cheniere has acquired land adjacent to its existing facilities that it wants to use for further expansions down the road.

As part of his prepared remarks on Cheniere's conference call, CEO Jack Fusco pointed out that the demand for LNG globally remains incredibly strong and that there is plenty of room for growth -- so much so that he hinted at management's plans to expand Corpus Christi beyond its most recent announcement.

Looking ahead at decisively positive LNG macro backdrop continues to fuel my confidence in our ability to grow our world-class LNG infrastructure platform through value-creating incremental liquefaction capacity projects. To that end, our marketing origination efforts today are focused on the commercialization of Train 6 at Sabine Pass.

In addition, we recently filed our FERC application on an expansion of the Corpus site of approximately 9.5 million tons of expected nominal annual capacity, and we have a full team eagerly developing additional incremental liquefaction capacity at the additional land we acquired adjacent to the Corpus site, which we'll provide more information in due course. There's a long growth runway at Cheniere, and our global teams are leveraging every competitive advantage we have in order to maintain our position of leadership in U.S.

You can read a full transcript of Cheniere's conference call here. 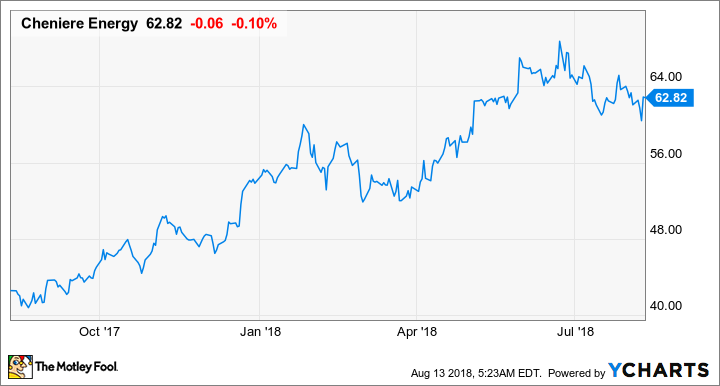 Demand is more powerful than tariffs for now

China's LNG demand has been a key reason why there hasn't been an oversupply of LNG some experts predicted would happen as several new LNG facilities in the U.S. and Australia started up. Of course, any discussion related to China these days will involve tariffs and how it will expect future demand. Fortunately for Cheniere, it already has a long-term contract in place with its largest Chinese buyer, CNPC, that ensures a fixed-fee price that won't be altered by tariffs (at least according to management).

The concern is that a prolonged period of tariffs and trade disputes between the U.S. and China could make it more challenging to market Cheniere's future expansion projects. That said, it's encouraging to see that the company continues to sign contracts with a geographically diverse set of customers that should help to offset exposure to any one country.

Not much should change over the next couple of quarters. It is currently commissioning two process trains under construction that should both go live in the first half of 2019. Until then, expect a lot of the same from Cheniere's earnings results.

Like Dividends and Growth? These 2 Energy Stocks Can Satisfy Both Cravings.
413%