A mid-cap biotech company that actually makes money and that doesn't depend on a small number of clinical trials coming out the right way is a rarity. Ligand Pharmaceuticals (NASDAQ:LGND) helps drug companies -- over 100 of them -- discover and develop new drugs and afterwards collects milestone payments and royalties as the partners advance the drugs to the marketplace. The company reported earnings on Aug. 6, and the results show the power of Ligand's business model.

Ligand has several technology platforms, with the two main ones being OmniAb, a tool for discovering new drugs based on antibodies, and Captisol, a molecule that improves the solubility, stability, and bioavailability of pharmaceutical ingredients. The company will work with a partner to research and discover drugs, and then license the technology, earning payments as the drugs move through the development pipeline and royalties when the drugs are marketed.

The company's strategy is to have many "shots on goal," or partnered programs for individual drugs, so that it's not too dependent on the outcome of any particular clinical trial. It now has over 170 such programs. Since there is very little cost associated with milestone payments or royalties, new revenue flows straight to the bottom line. Ligand's gross margin in 2018 is projected to be 96%. 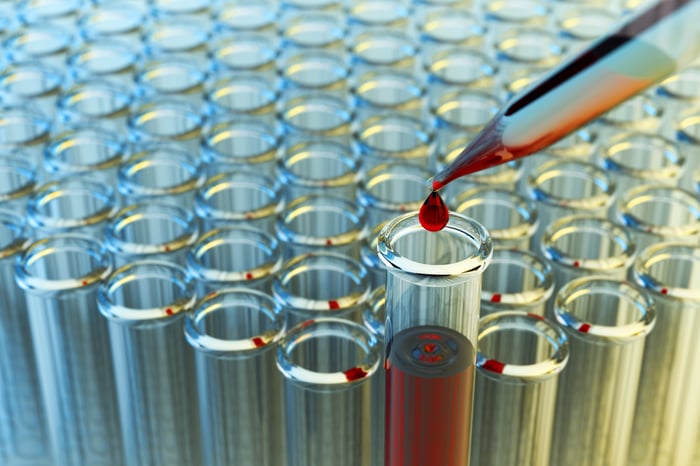 Ligand's results from the second quarter illustrate how rapidly the company is growing:

* Royalty comparison is with Q3 2017 because a change to accounting standard ASC 606 changed the timing of revenue recognition. Data from Ligand Pharmaceuticals.

The big increase in license fees was due to a renegotiation of Ligand's contract with Chinese pharmaceutical firm WuXi Biologics, which resulted in a $47 million payment to Ligand. WuXi uses Ligand's OmniAb platform to develop antibody-based drugs and licenses them to its clients in China and around the world. Under the former contract, Ligand received pre-defined contract payments plus royalties for the drugs WuXi developed. The new contract leaves the royalty agreement unchanged, but eliminates the contract payments in return for the up-front $47 million, which WuXi believes will increase the number of drugs it will be able to discover for its clients. Without that one-time $47 million windfall, Ligand's total revenue still would have jumped a whopping 54%.

Royalties from some very impressive drugs

Ligand's rapid growth in royalty payments is coming thanks to the commercial success of drugs that were developed on the company's platforms. Promacta/Revolade is helping to revive growth in Novartis' oncology portfolio, on its way to blockbuster status with a 39% increase in sales to $292 million in the second quarter. Ligand earns 9.4% royalty on sales of the drug. Sales of Kyprolis boosted Amgen's results in the latest quarter with sales growth of 25% to $263 million, and Ligand collects a 3% royalty on that one. The company also earns a 20% royalty on Evoloma, a multiple myeloma drug marketed by Spectrum Pharmaceuticals that a partner, CASI Pharmaceuticals is preparing to launch in China.

Two other drugs in Ligand's broad pipeline are stirring interest among investors this year. The U.S. Food and Drug Administration (FDA) is expected to render a decision by Dec. 19, 2018, on brexalalone, the lead drug from Sage Therapeutics that could become the first approved treatment for postpartum depression, yielding Ligand a 3% royalty on sales. The company also owns a 12.4% equity interest in Viking Therapeutics and would earn royalties between 7.25% and 9.25% on that company's lead drug, VK5211 for hip fracture recovery and between 3.5% and 7.5% on VK2809 for nonalcoholic fatty liver disease (NAFLD) and high cholesterol, which is in phase 2 testing that is expected to read out later this year.

Ligand increased its guidance for the full year, saying it expects revenue of $232 million, an increase of 64% from 2017, and adjusted earnings-per-share growth of 93% to $6.30. The company has historically used acquisitions to fuel growth, having bought 10 companies in the last decade, and it's primed to do some more. Ligand has $957 million in cash and short-term investments and said in the conference call that it's looking at all sorts of opportunities to expand its "shots on goal," including new platforms, technologies, or "broken biotechs." In fact, three days later, it announced it is spending $43 million to buy British biotech Vernalis plc, clearly a company in the latter category, which comes with eight fully funded, partnered programs in the respiratory, oncology, and central nervous system sectors.

The results announced last week were the latest in a string of positive earnings surprises for the company, beating the analyst consensus for revenue by 9.6% and EPS estimates by 10.7%. Ligand enjoys little analyst coverage, but long-term investors who want broad exposure to biotech with less binary risk of clinical trial failures would do well to sit up and notice this highly profitable and fast-growing company.