Please ensure Javascript is enabled for purposes of website accessibility
Log In Help Join The Motley Fool
Free Article Join Over 1 Million Premium Members And Get More In-Depth Stock Guidance and Research
By Daniel Miller - Updated Aug 15, 2018 at 9:35AM

Shares of Advance Auto Parts (AAP -1.64%), a leading automotive aftermarket parts provider for professional installers and do-it-yourself consumers, are up 8% as of 3:25 p.m. EDT Tuesday after a strong second-quarter result. In fact, the company's strong earnings result even boosted the share price of its competitors: AutoZone, Inc. (AZO 5.82%) popped more than 5% during early afternoon trading, and O'Reilly Automotive (ORLY 5.02%) also logged a smaller 3% gain. 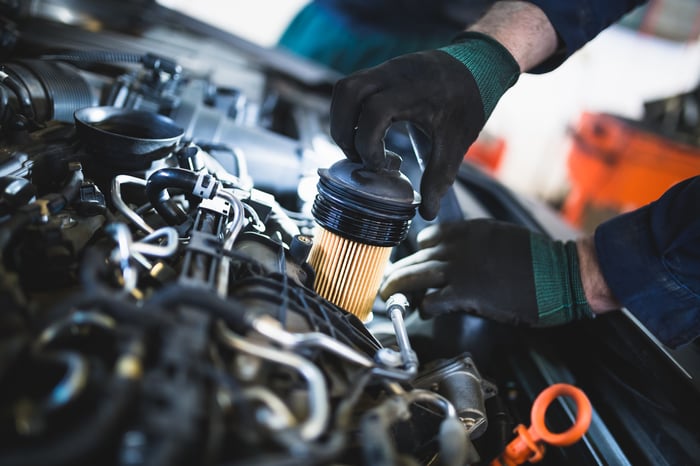 Our relentless focus on strengthening our Customer Value Proposition while embracing an owner's mindset on cost and cash resulted in improved sales and profit performance in the second quarter. I am encouraged by the progress our team made during the first half of 2018 and confident in our ability to drive growth throughout the balance of 2018.

Management also raised its full-year revenue guidance to a range of $9.3 billion to $9.5 billion thanks to the strong start to 2018 and noted that industry demand continues to improve. Advance also announced a new share repurchase program authorized for $600 million, with plans to return $100 million to $200 million to shareholders through buybacks during the second half of 2018. You could argue that share buybacks aren't the best use of capital -- Advance isn't cheap, trading at a price-to-earnings ratio near 23 times -- but between rising same-store sales, profits that topped estimates, and increased full-year guidance, there was plenty for investors to like about Advance's second quarter.

This Sleepy Sector Is Going Gangbusters, and No One's Talking About It