If you like the Oracle's style, these stocks are for you.

Warren Buffett built much of his fortune investing in high-quality companies. He stuck to companies that he understood, and he made sure that the price he paid was reasonable. Many of the companies that are part of Berkshire Hathaway's portfolio have durable competitive advantages that allow them to stand the test of time.

If you're looking for Buffett-style stocks, three of our Motley Fool contributors think you should check out United Parcel Service (UPS -4.35%), General Mills (GIS -0.25%), and Allergan (AGN). Here's why. 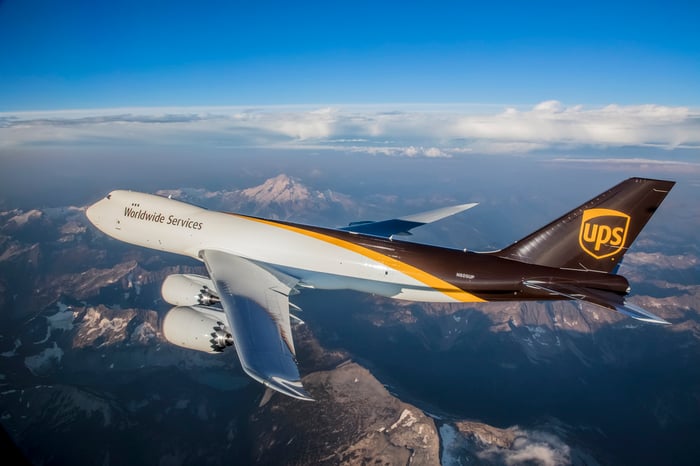 The parcel system is here to stay

Nicholas Rossolillo (United Parcel Service): UPS is one of Buffett's smaller holdings at just $6.2 million at last report. Nevertheless, it still deserves consideration by fans of the investor. While trailing price to earnings sits at 20.0, one-year forward price to earnings is at 14.9, indicating a big anticipated expansion in profits. The stock also pays out an attractive 3% annual dividend yield.

However, UPS' business has had its challenges. Internet-based retail has caused a boom in the number of package deliveries, but profitability on those deliveries has suffered. Plus, e-commerce leader Amazon.com (AMZN -3.31%) has begun taking over some of those delivery services itself in recent years, including a new third-party delivery partner program geared toward helping small parcel businesses.

That has had an effect on UPS. Revenue has steadily risen by 26% over the last five years, but free cash flow -- money left over after basic operations and capital expenditures are paid for -- has dried up as the world's largest delivery and logistics company invested to keep up with the digital age.

Things are looking up for UPS lately, though. Its second-quarter 2018 report showed improving profitability, its investments into technology and business improvements are starting to yield results, and management upgraded its outlook for the rest of the year. The international segment has been an especially bright spot, with its 14th consecutive quarter of double-digit profit growth during the spring months.

Though there are challenges, UPS is a growing business trading at a value to its future potential because of some uncertainty. For Buffett fans, that's a stock worth considering.

Some of General Mills' brands are not doing well at all. U.S. yogurt sales tumbled 12% in fiscal 2018, for example, with the Yoplait brand failing to drive sales. Total organic sales, which exclude the effects of acquisitions and divestitures, dropped by 1%. Clearly, General Mills needs to rework its portfolio.

The company has taken at least one big step to diversify, paying $8 billion for natural pet food maker Blue Buffalo earlier this year. The deal will boost General Mills' annual sales by more than $1.2 billion and put the company into a category that's growing quickly. The U.S. pet food market has been growing by 3% to 4% annually, while the natural portion of the market has been growing at a double-digit rate in recent years.

Other than Blue Buffalo, General Mills views Haagen-Dazs, snack bars, Old El Paso Mexican food, and its natural and organic brands as its key growth drivers going forward. It plans to sell off some businesses that are in decline, refocusing on brands capable of driving growth. This will all take time, and investors should expect not-so-great results for a while.

But the stock looks like a decent deal, all things considered. The company expects adjusted earnings to come in somewhere around $3 per share in fiscal 2019, putting the price-to-earnings ratio at about 15. That's not quite cheap enough for me, but I'm keeping an eye on the stock.

Closing in on key data

Todd Campbell (Allergan Plc): Warren Buffett doesn't spend his time on hard-to-value companies. Instead, he likes to buy stock in companies that generate cash and that trade at a discount to their book value. It's that approach that likely contributed to Berkshire Hathaway buying shares in generics Goliath Teva Pharmaceutical (TEVA -0.46%) late last year.

Teva Pharmaceutical could still be a buy, but its shares have almost doubled since last fall, and as a result, it's arguably more expensive now than Allergan. Once a highflier because of its growth-via-mergers-and-acquisitions strategy, Allergan fell out of favor after Valeant, a competitor that also relied heavily on acquisitions, fell on tough times. Allergan's $185 share price is far below its $340 peak in 2015 and its price-to-book ratio (share price divided by book value) is only 0.86. For comparison, Teva Pharmaceutical has seen its price to book soar from less than 0.50 to 1.62 since Buffett began buying it last year.

I have no idea if Allergan's shares will rebound similarly, but this is the second time in the past three years that Allergan's price to book value has dropped below 1. The last time around, its shares jumped from about $190 to roughly $245 between late 2016 and early 2017. This time around, shares could fall further, but I think the risk/reward is pretty favorable, especially since its financials have been improving. 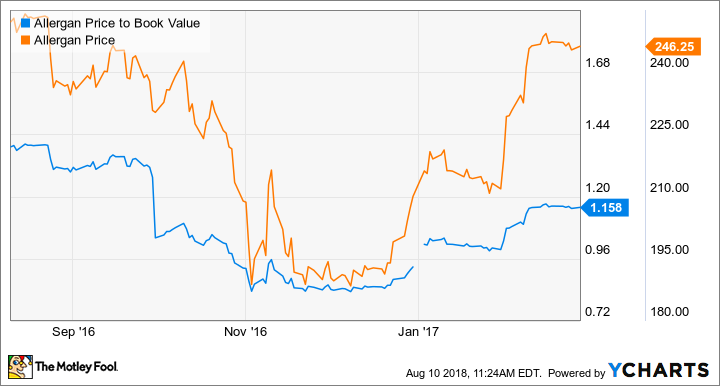 The company's still got a lot of debt on its books, but cash flow appears solid, and management's taking advantage of its depressed share price with a new $2 billion buyback program to be executed over the next 12 months. Overall, I think Allergan could be a cheap stock worth owning.