Google maintains its lead over Amazon in the second quarter.

It never hurts to get a second opinion.

While Strategy Analytics recently estimated that the global smart speaker market tripled in the second quarter to 11.7 million units, Canalys is now releasing even rosier estimates. The latter researcher believes that the worldwide smart speaker market jumped a whopping 187% in the second quarter to 16.8 million units. While the totals vary, one theme is similar: Alphabet (GOOG -2.74%) (GOOGL -2.44%) subsidiary Google is taking a bite out of Amazon.com's (AMZN -1.65%) long-standing dominance.

Canalys believes that Google maintained its lead over Amazon in the second quarter, after its figures showed the search giant overtook the e-commerce behemoth in the first quarter.

Google is leading the way

According to Canalys, Google was the No. 1 smart speaker vendor in the world in the second quarter, grabbing nearly a third of the entire market with 5.4 million Google Home shipments. Amazon shipped an estimated 4.1 million Echo devices, according to the report.

While the U.S. has been the biggest market for smart speakers historically, China has emerged as the "growth engine," Canalys says. China is now the fastest-growing smart speaker market, and represented over half of volume growth globally. That's good news for local players like Alibaba and Xiaomi; Alibaba commands over half of the Chinese smart speaker market. The U.S. is still a larger market in overall volume, but the Middle Kingdom is rapidly closing the gap. 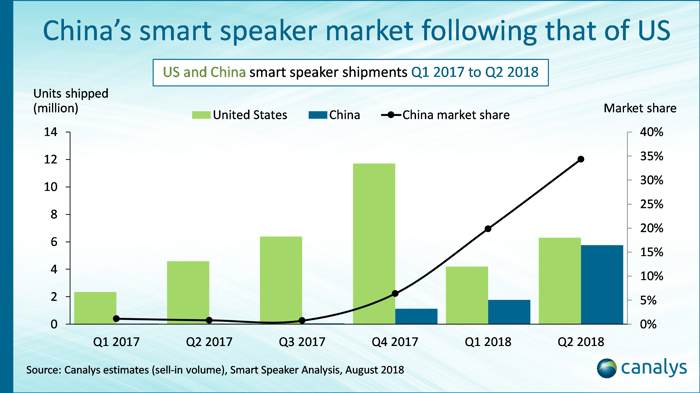 As large tech companies, Alibaba and Xiaomi are both able to price their products aggressively to spur unit sales. That will make it harder for smaller vendors to compete, but Alibaba and Xiaomi will still need to figure out how to monetize usage of their smart speakers. Xiaomi is working to build its services business, but has a long way to go, as services represented 9% of revenue in 2017.

Google has more smart speakers in the pipeline

In related news, the Nikkei Asian Review also reported today that Google is preparing to release a smart speaker that features a display, which would compete with Amazon's Echo Show and Echo Spot, both of which have displays. Rumors of such a device first emerged last year. The gadget is expected to ship this year in time for the holiday shopping season and Google is hoping to ship 3 million units in its "first batch," according to an anonymous source.

While Echo Show isn't a big seller in terms of volume (Canalys estimates that Amazon shipped 315,000 Echo Show units in 2017), it's clear that Google wants to build on its smart speaker momentum with a growing portfolio. Of all the hardware categories that Google competes in -- which now includes Pixel phones and Pixelbook convertible laptops -- smart speakers appear to be the most promising in terms of capturing a meaningful share of the market.