You would think that when a drug company that's been working for 16 years to develop drugs using a novel therapeutic approach wins its first-ever approval from the U.S. Food and Drug Administration (FDA), confetti would fall from the ceiling and its investors would be celebrating a huge stock gain the next day. That didn't happen this week for shareholders of Alnylam Pharmaceuticals (ALNY 0.44%), with shares dropping 6.6% the day after the announcement, and there were two main reasons for that.

On Aug. 10, Alnylam announced that the FDA approved patisiran, now named Onpattro, for treatment of polyneuropathy in patients with the rare disease of hereditary transthyretin-mediated amyloidosis (hATTR). hATTR is an inherited, progressively debilitating and potentially fatal disease in which a mutation of the transthyretin gene causes abnormal amyloid proteins to accumulate and damage body organs and tissue, including peripheral nerves and the heart.

The mean survival of patients with the disease is 4.7 years after diagnosis, and Onpattro is the first FDA-approved treatment for it. Alnylam says that there are about 3,000 patients in the U.S. diagnosed with hATTR polyneuropathy, but that the disease is so underdiagnosed that there could be as many as 10,000 to 15,000 candidates for the drug in the country.

Alnylam is one of several companies working on a new class of drugs that block the production of disease-causing proteins. Alnylam's technology is called RNA interference (RNAi), and works by silencing messenger ribonucleic acid (mRNA) that is specific to production of the target protein. Onpattro silences the liver's manufacture of the protein transthyretin (TTR), normally a carrier of vitamin A in the bloodstream. People with hATTR have a mutation in the gene responsible for TTR production, which causes abnormal proteins to accumulate in the body's tissue, causing nerve damage (polyneuropathy) or heart damage (cardiomyopathy). Onpattro stops the disease at its source. 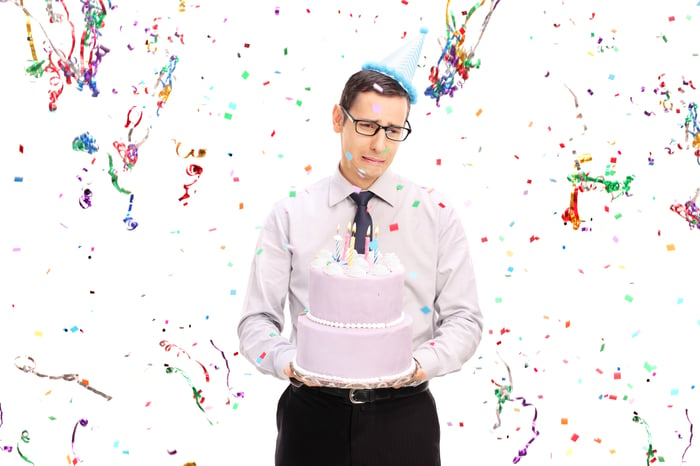 While the approval was undoubtedly good news, two issues revealed along with the announcement created concern with investors.

Alnylam announced it has reached value-based agreements (VBA) with payers representing 76% of the commercial medical lives in the U.S. to cover the expense of Onpattro. The good news is that the company was proactive in making sure that insurers will pay for the drug. The bad news for investors is that the VBAs create uncertainty about the revenue Onpattro will actually bring in.

The agreements involve rebates or discounts on the cost of the drug if a patient's response to it is "suboptimal." If progression of the disease is halted or reversed, the patient will be charged the full price of the drug. If the clinical results do not meet a certain standard -- and the company was unwilling to discuss what the measures are or what that standard would be -- there will be several levels of discounts that would be applied as rebates to the payer. The testing will start nine to 12 months after the beginning of treatment and will be assessed annually by the patient's doctor.

The company revealed that the drug would be priced at an annual average list price of $450,000, yielding an average effective price of $345,000 after rebates to government institutions that are mandated by law. That pricing was probably in the ballpark of what analysts expected, but unfortunately, the effective price does not include rebates that would happen as a result of the VBAs. Analysts on the conference call tried to get a handle on what assumptions could be made to get an estimate of the impact of those rebates, but the company couldn't give an estimate of a failure rate for the drug.

The market hates uncertainty, and the unknowns around the value-based drug pricing plan make estimating revenue for the company difficult, and that uncertainty is unlikely to be resolved for a year or so.

2. Alnylam can't use cardiac data to market the drug in the U.S.

Throwing even more confusion into the mix was the potential impact of the conservative position the FDA took on the cardiac benefits of Onpattro. The pivotal trial for the drug had some exploratory endpoints for cardiac benefits for a subpopulation of the trial participants who had evidence of pre-existing cardiac amyloid involvement. Not all the endpoints were met with statistical significance, but some were, providing some evidence that the drug can reverse heart damage caused by the disease.

As it turned out, the FDA did not allow a mention of cardiac benefits on the drug label because it felt they were not firmly established by the trial results. Alnylam executives on the conference call said that they would be discussing label expansion with the FDA, but the hurdle to getting a cardiac indication in the U.S. may require additional clinical trials, adding months or years to the process.

The FDA decision is a big deal for investors because it adds to uncertainty about how Onpattro will do against the competition. Ionis Pharmaceuticals and its partner Akcea Therapeutics have already won European approval for their drug Tegsedi, with a label for polyneuropathy but without the cardiac indication. Alnylam is expecting that a broader label that includes cardiac benefits would give it a serious advantage over Tegsedi. Also, Pfizer announced earlier this year that its drug tafamidis reduced mortality and cardiovascular-related hospitalizations for patients with TTR cardiomyopathy after 30 months, news that sent Alnylam stock down 8%.

The concerns may be overblown

Uncertainty over these two factors that were revealed along with the excellent news of the FDA approval is real, but the market may start to feel better about the situation over time. The value-based agreements with insurance providers does have the potential to impact Alnylam's revenue, but it may well be the way of the future for these very innovative approaches to treating rare diseases. Payers don't want to commit to covering the cost of drug therapies that don't work for some segment of the patient population, who may be desperate to find something that helps.

On the flip side, having a VBA in place lowers the risk for payers, making them more willing to say in advance that the treatment will be covered. For its part, Alnylam has confidence that the drug actually will work for the large majority of patients, having reviewed in detail the impact the drug had on its trial participants. It chose a time frame for the evaluation that is far enough out in time for the clinical benefits to be clear to the patients and their doctors.

The loss of competitive advantage that comes with the lack of a cardiac indication in the U.S. is a real concern, but it's going to take some time to see how serious it is. Ionis is expecting a decision from the FDA on Tegsedi on October 6, and if the drug wins approval, it could be a serious threat to Onpattro due to more convenient administration. Onpattro is an 80-minute intravenous transfusion every three weeks, while Tegsedi is a weekly subcutaneous injection. However, possibly balancing out the convenience of an injection is the fact that patients taking Tegsedi need to be monitored for thrombocytopenia, or low blood platelets, a procedure that needs to be carried out with a frequency between daily and every two weeks, depending on platelet count. There is no such requirement for Onpattro, so it's unclear which drug gets the nod for greater convenience.

The threat from the Pfizer drug tafamidis has stirred concern among analysts, but it's even less clear how that drug will affect Onpattro sales. The clinical tests are hard to compare because the patient populations were different. The Pfizer trial included patients with wild-type ATTR, which is not hereditary and are not included in the Onpattro label. If tafamidis is approved, the indication will be for cardiac myopathy but not for neuropathy, the indication for Onpattro and Tegsedi. In fact, the FDA rejected an application by Pfizer for tafamidis as a treatment for neuropathy six years ago for lack of proof of efficacy. So tafamidis is apparently inferior to the other two drugs for treating nerve damage, and without more clinical data, there is no head-to-head comparison for the cardiac indication, either.

Perhaps an even bigger disadvantage for Pfizer lies in the differences between how the drugs work. Onpattro and Tegsedi work by inhibiting the production of TTR proteins, fighting the disease at its source, while tafamidis stabilizes the proteins to prevent the deposits in the heart and nerves that do the damage. Tafamidis slows the progression of the disease, while Onpattro and Tegsedi halt it and can even reverse its effects. The press release from the FDA announcing the approval of Onpattro clearly states the agency's desire for more treatments of this type:

"This approval is part of a broader wave of advances that allow us to treat disease by actually targeting the root cause, enabling us to arrest or reverse a condition, rather than only being able to slow its progression or treat its symptoms. In this case, the effects of the disease cause a degeneration of the nerves, which can manifest in pain, weakness and loss of mobility," said FDA Commissioner Scott Gottlieb, M.D. "New technologies like RNA inhibitors, that alter the genetic drivers of a disease, have the potential to transform medicine, so we can better confront and even cure debilitating illnesses."

Investors should keep the bigger picture in mind

Uncertainty in a company's outlook is something that is usually bad for the stock price, but one thing that has become more certain for Alnylam has been the usefulness of RNAi for developing novel drug therapies. The approval of Onpattro should increase the value of the other drugs in Alnylam's pipeline for long-term investors. The company has three other drugs in late-stage trials and three more in earlier stages. Besides genetic medicines, it is focusing on cardio-metabolic diseases, hepatic infectious diseases, and central nervous system diseases. The biggest challenge of RNA-based medicines has been the ability to concentrate enough of the drug in the critical organ, a problem that Alnylam has solved well enough to produce an effective therapy.

The ability to silence the production of disease-causing proteins could lead to many breakthrough therapies, and Alnylam is at the forefront of the innovation. Patient investors who are willing to live with the uncertainty inherent in this frontier of medicine -- and the ups and downs of the stock -- could have big rewards down the road.