Please ensure Javascript is enabled for purposes of website accessibility
Log In Help Join The Motley Fool
Free Article Join Over 1 Million Premium Members And Get More In-Depth Stock Guidance and Research
By Travis Hoium - Aug 18, 2018 at 7:15AM

From a customer perspective, it may not seem like AT&T Inc. (T 0.17%) and Sprint Corp (S) are very different as companies. Both offer wireless service to customers, and each has a nationwide presence. But they're very different under the surface.

AT&T is a high-end wireless provider that sells fast connections and premium pricing. Sprint has developed a niche as a discount supplier with a network that's good enough for most customers. The businesses offer very different opportunities and economics for investors -- which make one a much better buy today. 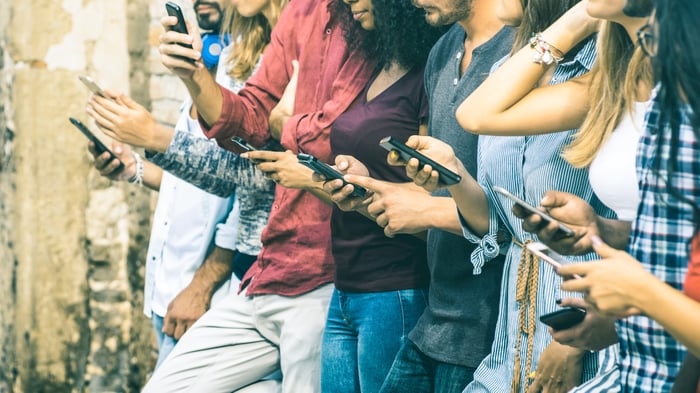 The first thing to look at in comparing AT&T and Sprint is the sheer scale of their businesses. A larger network requires more capital investment -- that's actually one way for investors to measure the quality of a network. You can see below that Sprint's install base simply can't compete with AT&T's. 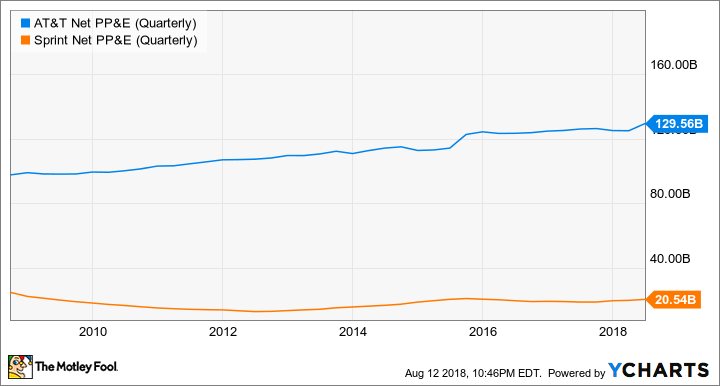 As we dive further into the business, this property, plant, and equipment (PP&E) difference will be critical for the two companies.

What a better, larger network allows AT&T to do is charge higher prices to customers. For example, AT&T's standard unlimited plan for three lines is $170 per month, while a similar plan from Sprint is $150 per month. AT&T can charge more because its network is larger and higher speed in most places.

The result is what you see below. AT&T is nearly five times the size of Sprint on a revenue basis, and generates far more net income. In fact, Sprint would be near break-even over the past year if it weren't for a $7.1 billion favorable impact from the tax reform bill in the quarter that ended December 31, 2017. 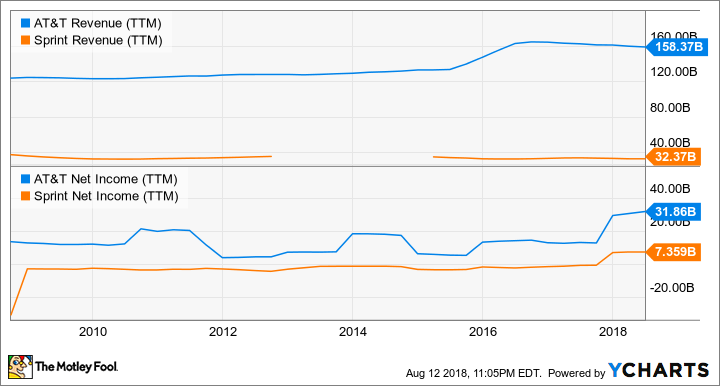 Size has paid off on the bottom line for AT&T, and that trend doesn't show any sign of changing.

Scale drives higher revenues and better margins, which in turn means better return on each dollar of assets AT&T installs. The chart below shows return on assets over the past decade for AT&T and Sprint, up to the $7.1 billion one-time benefit mentioned above. You can see that there hasn't been a single point when Sprint has generated better returns than AT&T. 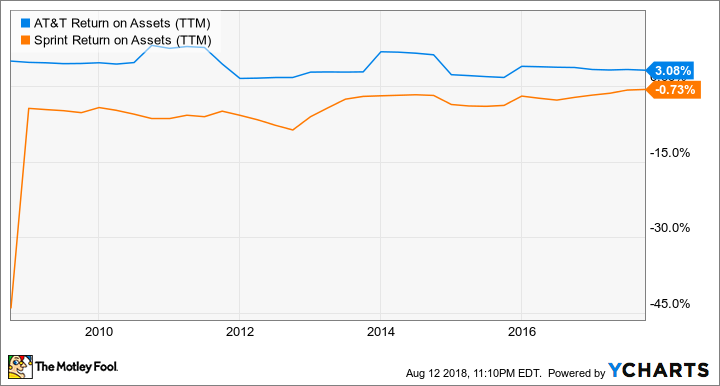 At the end of the day, a company should be judged on how effectively it can generate a return on the dollars it invests. And on that front AT&T is the clear winner over Sprint.

AT&T is set for the next generation of mobile

The charts above show a backward look at these two companies, but the mobile landscape won't be static forever. 5G networks are being built as we speak, and network providers are starting to move into the content business to ensure they stay relevant long-term. That's why AT&T bought Time Warner, and it's an early leader in 5G as well. With more capital, it can outpace Sprint's 5G buildout.

As they prepare for the next generation of mobile and content, AT&T simply has the firepower to stay ahead of Sprint, and seals AT&T as the better stock of these two.