Twitch's CEO thinks the company can more than double revenue in short order.

Amazon (AMZN 0.25%) bought Twitch in 2014 for about $1 billion. Back then, the streaming video platform focused solely on live video game streaming. But Amazon has expanded into content categories including cooking, crafts, and, more recently, live sports. The moves have paid off, with average viewers doubling over the past year, according to data from ComScore.

Twitch CEO Emmett Shear set a target of $1 billion in ad revenue at a recent staff meeting, according to a report from Bloomberg. That's more than double its current ad sales, but still a far cry from the kind of revenue pulled in by YouTube, an Alphabet (GOOG -1.29%) (GOOGL -1.34%) subsidiary. Of course, Twitch has an audience about 1% of the size of YouTube's massive viewer base, so $1 billion is quite a bit. 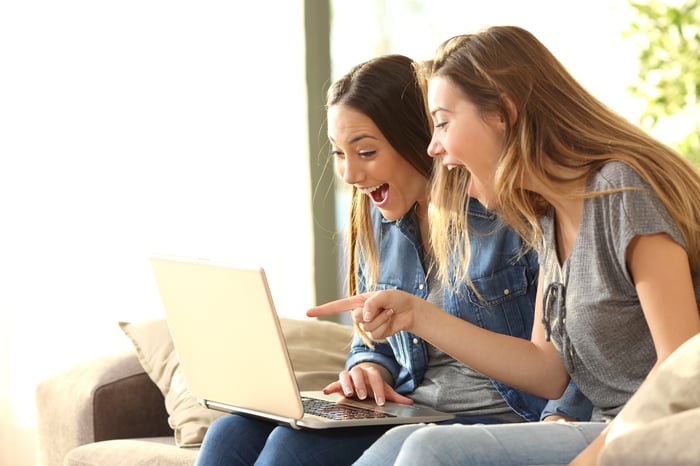 Falling back on Amazon's advertising business

In case you haven't heard, Amazon has a rapidly growing advertising business. While the business is primarily focused on sponsored product listings that show up in its product search results, Amazon is also expanding into video advertising.

The retail giant is investing a lot of money in live sports rights, including the NFL's Thursday Night Football, ATP tennis with exclusive U.S. Open rights in the U.K. and Ireland, minor league basketball, and Premier League soccer. Amazon is ramping up video ad sales in order to support its live sports streaming rights on Prime Instant Video and Twitch.

As an ancillary effect, Amazon's ad sales are also supporting the growth of Twitch, as the company attracts more marketers and beefs up its sales team.

Sales could get a kick in the near future as Amazon works to unify its ad buying platform, making it easier for marketers to buy ads and measure their performance. On the company's second-quarter earnings call, CFO Brian Olsavsky noted it's working on "improving the usability of our tools." It's also developing more automation and measurement tools for advertisers.

The investments should help Amazon's core advertising business, but undoubtedly the benefits will spill over to Twitch, which has a growing amount of ad inventory with all the new viewers it's attracting.

Falling back on Amazon's cash

Twitch can't just stand still with a competitor like YouTube that's constantly working to keep and foster talented creators. Amazon and Twitch are going after some of YouTube's top creators as well as big celebrities to create content exclusively for Twitch. The company is offering upfront minimum payments of as much as a few million dollars a year, according to Bloomberg.

The strategy sounds a lot like Facebook's (FB 1.18%) to spur live-streaming on its platform a couple years ago. Facebook paid celebrities and news publishers upfront for streaming video on a consistent basis. Facebook has since changed gears, focusing on prerecorded content for its Watch platform.

Twitch may find a bit more success since it's already a destination for live-streaming video. Importantly, it's looking for creators who already have a strong following on social media, and who can direct a new audience to Twitch. It's also worth noting that the size of Twitch means a successful campaign doesn't have to produce as many new viewers on an absolute basis as on YouTube or Facebook.

Twitch already generates an impressive amount of ad revenue considering its audience size. Viewers are highly engaged on Twitch. Last month, viewers streamed 775 million hours of video. That's about 1 hour 40 minutes of streaming per daily active user per day. YouTube users stream about half as much.

What's more, the quality of engagement on YouTube might not be as high. But advertisers are still paying similar amounts for an hour spent on YouTube versus an hour spent on Twitch. Twitch fans aren't just streaming video, they're actively engaged with the creators and message boards, which may mean they respond to ads better. If a YouTube streamer is streaming an hour of music videos, they might ignore the ads entirely. Amazon and Twitch could introduce better measurement tools that prove that out.

If Twitch can attract new viewers with its expansion to new content while maintaining the same level of engagement, it could see a meaningful spike in ad revenue, not just from more hours streamed but from better ad conversion for marketers. Amazon's $1 billion investment in Twitch is starting to pay off, and it might still be early innings for the streaming video platform.