The new device inches closer to being a smartwatch, with real apps and an OLED screen.

Fitbit (FIT) has found some success with its affordable Versa smartwatch, but its core fitness tracker business is floundering. Despite strong smartwatch sales, Fitbit sold just 4.8 million devices through the first half of the year. That's down about 24% from the same period last year.

The company is aiming to change the story with the Charge 3, an update to its popular Charge 2 fitness tracker. Unlike the Charge 2, which brought mostly minor changes when it launched in 2016, the Charge 3 represents a more substantial upgrade. It might be enough to compel Fitbit's user base to replace their aging fitness trackers. 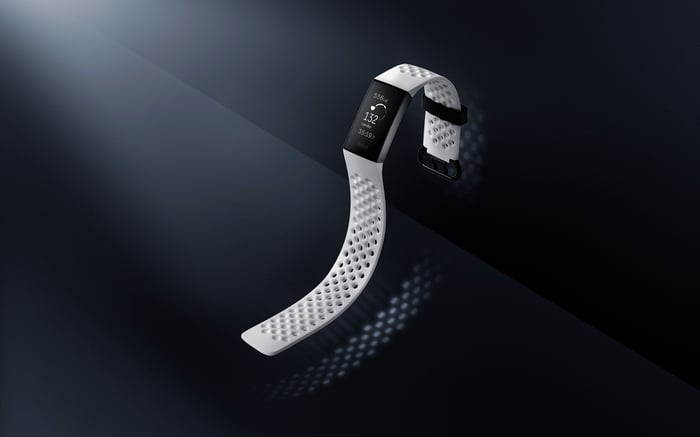 The biggest cosmetic change the Charge 3 brings to the table is a large OLED display. Fitbit claims the new display is nearly 40% bigger and brighter than the Charge 2, and this time around it's covered in Corning's Gorilla Glass 3 for durability. That's one place where the Charge 3 has the Versa beat -- Fitbit's $199 smartwatch features a standard LCD display.

Despite the larger screen, the Charge 3 is slimmer than its predecessor. An inductive button, based on some patent-pending technology, allowed Fitbit to increase the battery size and add additional sensors. The Charge 3 will last up to 7 days on a single charge, and it adds a SpO2 sensor that can estimate changes in blood oxygen levels. One application of the new sensor is tracking sleep apnea. The Charge 3 is also water-resistant up to 50 meters, a feature that was not present in the Charge 2.

On top of the hardware changes, the software has been revamped as well. Charge 3 users can view an expanded assortment of notifications for calls, texts, and some apps like Facebook and Uber. Android users will be able to respond to texts directly, and the device will come with alarm, timer, and weather apps. A calendar app will be added in the future, along with some popular third-party apps already available on the company's smartwatches.

The Charge 3 is not a proper smartwatch, but it gets pretty close. It doesn't run the same OS as Fitbit's true smartwatches, but the addition of third-party apps is a big change from the company's older fitness trackers. For users who don't want a full smartwatch but still want some advanced features, the Charge 3 might be right up their alley.

The Charge 3 is priced at $149.95, the same price as the Charge 2. A special edition featuring an NFC chip for mobile payments via Fitbit Pay will also be available for $169.95.

There's a good reason why Fitbit isn't giving up on fitness trackers. Fitbit's own research conducted last year found that 42% of adult consumers who considered buying a wearable wanted a tracker, compared to 36% who wanted a smartwatch. There's certainly still a market for these simpler trackers. And for users who already own an older Fitbit product, the Charge 3 may be a big enough improvement to trigger upgrades.

If the Charge 3 is a hit, it may finally halt the ongoing decline in Fitbit's tracker sales and return the category to growth. One thing to be concerned about, though, is profitability. The Charge 3, with its OLED screen and Gorilla Glass cover, will undoubtedly be more expensive to produce than the Charge 2. By keeping the price the same, Fitbit may be accepting lower margins in an effort to boost sales. That could extend the time it takes for the company to return to profitability in exchange for a quicker return to revenue growth.

The Charge 2 failed to revive the company's tracker business because it just wasn't much of an upgrade. With the Charge 3, Fitbit isn't making that mistake again.