Everyone naturally thinks about toys, but there is a bigger market to exploit.

The loss of Toys R Us has a lot of retailers angling to grab a piece of the $1.7 billion in annual toy sales it generated, but they may be overlooking where the real money was being made.

Although Toys R Us had a 14% share of the U.S. toy market, toy sales actually made up less than 20% of its domestic revenue. Baby gear was a far more strategically important division to the company, representing about 36% of total domestic revenues. There might have been more Toys R Us stores operating, but the Babies R Us chain carried the weight for the company. 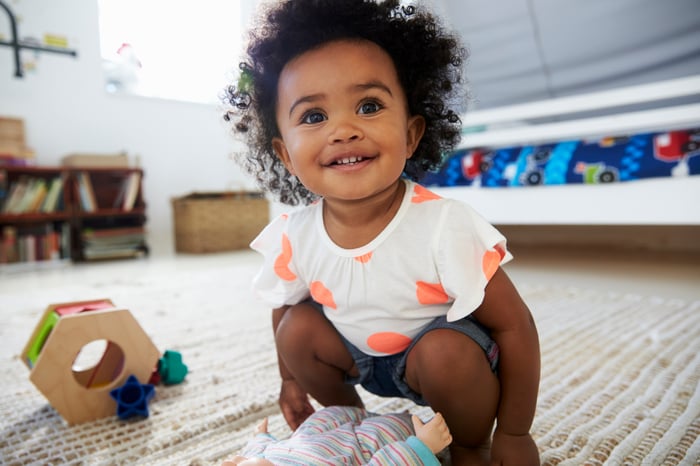 J.C. Penney (JCPN.Q) sees an opportunity to capture some of those sales by offering an expanded selection of baby goods in new baby shops that will be featured in 500 stores. Importantly, the locations were specifically picked because they were located near Babies R Us stores that had closed.

Starting Aug. 30, the departments will get new signage and graphics, and J.C. Penney will be promoting the launch with a special 12-page catalog. The department store chain's senior VP and head of merchandising, James Starke, says J.C. Penney is "seizing this opportunity to pursue available market share and aggressively go after the baby customer with these new shops."

While acknowledging the broad selection of goods that can be found online, Starke believes the competition is missing the importance of having an in-store shop, "and that is where JCPenney is going to differentiate."

Although it is an opportunistic play for J.C. Penney, much like bringing back appliances after 30 years to take advantage of Sears Holdings' woes, it carries risk for the retailer because the department store has been all over the map with the message it is sending and the customer it is targeting.

Just last month, the retailer said it was done chasing millennial customers and was going to focus with laser-like precision on its core customer, middle-aged moms. J.C. Penney admitted it had taken its eye off of the shopper who mattered most to it, so the question now is, does baby gear appeal to middle-aged female consumers?

On the one hand, J.C. Penney looks like it is reverting to its old ways by saying the new baby shops will appeal to first-time parents who still want to see and feel certain products for their child before buying them. This seems to be going after millennials again, and they, more than other generations that preceded them, are more comfortable shopping online. The oldest millennials are in their mid-30s, with the youngest in their early 20s.

On the other hand, Gen X and baby boomer women have more disposable income than their younger cohort and a greater willingness to spend it. Since these are the consumers J.C. Penney wants to focus on, perhaps the baby shops will attract them as well, as they buy for friends and relatives who are becoming parents, or perhaps themselves. The youngest Gen X members are in their late 30s.

Others are laying claim to their own niches

It will likely come down to how J.C. Penney markets to these consumers and how the competition responds. A few others have also taken notice of this niche.

Walmart (NYSE: WMT) is not one to let an opportunity go to waste, and in the aftermath of the demise of Babies R Us, it too began going after the retailer's customers, but online rather than in store. CNBC reported that Walmart has added more than 30,000 new items to its baby gear line.

Bed Bath & Beyond (NASDAQ: BBBY) also hoped to pick up some of the displaced sales by trying to lure those with baby registries at Babies R Us to list with its buybuy Baby chain, the third-most-popular destination for baby registries after Amazon.com and Target. buybuy Baby even added a new tagline to its site, "We're here to stay. Shop with confidence!"

J.C. Penney's differentiated strategy of utilizing its extensive physical presence to capture a part of the market for baby goods plays to its strengths and could be successful. The key will be whether customers respond to the offerings or see it as yet another confusing message that says the old-line department store still doesn't know what it wants to be.