The wind- and solar-power company is making excellent progress on its turnaround plan.

TerraForm Power (TERP) has come a long way since Brookfield Asset Management (BAM 0.23%) took control of the renewable-power-generating company last fall. At the time, the pair unveiled an ambitious turnaround plan to improve TerraForm's legacy operations and reposition it for future growth. That strategy is working out even better than the companies initially anticipated, which was evident in its second-quarter report.

As the table shows, TerraForm Power produced strong earnings and cash-flow growth during the second quarter. What makes those results impressive is that they came even though the company generated less renewable power compared to last year's second quarter after it sold some assets to help improve its balance sheet. The company also experienced some weaker results from its North American wind portfolio due to higher-than-normal maintenance as a result of the same outage that impacted results last quarter. TerraForm, however, was able to more than overcome those issues by closing its acquisition of Saeta and benefiting from its cost-saving initiatives. 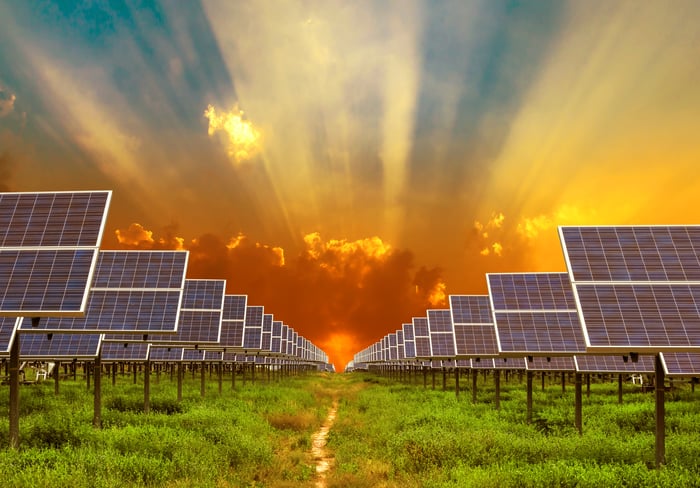 TerraForm initially hoped to realize $25 million in annual cost savings within two to three years by streamlining its organizational structure and cutting operational and maintenance expenses. However, it's well ahead of that timeline after securing an 11-year deal with General Electric (GE 0.78%) during the second quarter, which will perform maintenance on TerraForm's entire wind fleet in North America. The agreement should start saving the company money in the first half of next year.

Because the company is well ahead of schedule on its cost-savings initiatives, it's starting to work on additional improvements. TerraForm is now looking at ways to increase the performance of its solar assets by identifying issues that are impacting production. It aims to begin implementing a plan to address these problems in the first quarter of next year, which should provide an incremental boost to its renewable power generation as well as cash flow.

On top of its self-help efforts to extract more value from its legacy portfolio, TerraForm is also working on expanding its asset base. It took a significant step forward in the second quarter by completing its acquisition of Saeta, which will immediately boost production and cash flow. In addition to that, TerraForm also expects to capture additional cost savings in the future by renegotiating service contracts, hoping to sign a deal similar to the one it has with GE for its North American wind portfolio.

Finally, TerraForm noted that it had identified about $500 million of organic investment opportunities within its existing portfolio. The company already started working on capturing some of these initiatives during the second quarter. For starters, it signed an agreement to expand its Tinkham Hill solar farm in Massachusetts, which it expects to complete by year end. In addition to that, the company exercised its right to acquire a small solar portfolio in California and New Jersey from a previous acquisition. Finally, the company bought out a partner on another solar project during the quarter. While these are smaller-scale transactions, TerraForm expects them to generate strong returns on investment, which will enable it to move the needle as it captures more of these opportunities in the future.

Brookfield's plan to transform TerraForm Power into a company that can grow value for investors is not only clearly working but well ahead of schedule. Because of that, the renewable-power company has the potential to generate dividend growth at or above the high end of its 5% to 8% annual target range. That potential for high-end growth from a high-yielding stock is what makes it one of the best renewable energy companies to buy these days, in my opinion.