The burrito chain had a bulletproof brand back in 2015, with average unit volumes around $2.5 million and a market value of as much as $23 billion. It was a model for the restaurant industry after having essentially disrupted fast food and pioneered the fast-casual model with its fresh-food, assembly-line format.

That all changed with the 2015 E. coli outbreak. The foodborne illness sickened around 60 of its customers across the country, and that, along with a weak response and a sales slide that followed, eventually slashed as much as two-thirds off of the stock price. The outbreak took the shine off of the former market darling.

Under new CEO Brian Niccol, the stock has surged this year, as investors are once again optimistic about the burrito roller's prospects. Shares are up 78% this year, but that rally was put into jeopardy by yet another health scare. 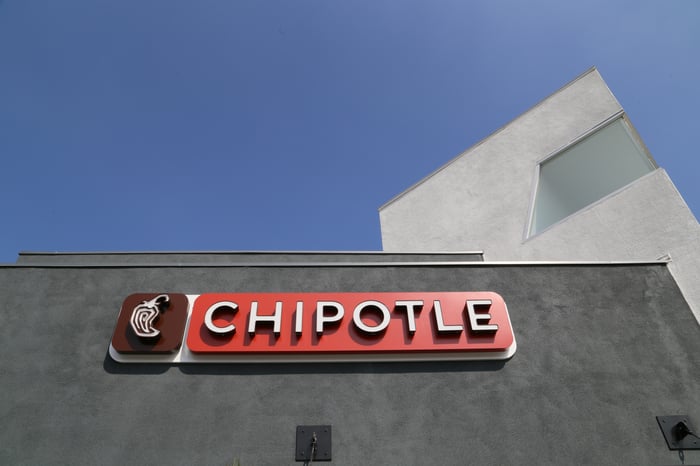 On July 31, reports emerged that there was another foodborne illness outbreak, this time at a location in Ohio. More than 100 people were reported sick, and Chipotle temporarily shut the restaurant. The news sent shares down as much as 7% in a single day, as investors feared that the news could cause a subsequent decline in traffic, much like a similar outbreak that closed a Chipotle in Virginia the year before.

However, Niccol had a novel approach for dealing with the issue, which was thought to be a norovirus outbreak at the time but was later confirmed to be Clostridium perfringens, a disease caused by food being left at an unsafe temperature.

Instead of confronting the news directly to offer an explanation or even apologize, Niccol doubled down on a guacamole promotion that Chipotle was offering at the time, extending it by an extra day. In a press release, the company said that July 31 was its biggest summer sales day ever, and it thanked its customers by extending the free guacamole promotion an extra day.

Doing this accomplished two things. First, it covered up the negative news about the food-poisoning incident and, more importantly, it signaled that customers simply didn't care about an incident at a single restaurant. They were busy stuffing their faces with free guacamole. Chipotle followed up that offer with a free delivery offer with Doordash over that weekend and announced it was testing bacon, nachos, and late-night bites at several restaurants the week after, reinforcing the idea that the company was rewarding customers and improving its offering.

Since the foodborne illness report, Chipotle stock is now up 20%, seemingly due to the initiatives above and an analyst upgrade.

Since the news broke about the outbreak, Chipotle has announced more steps to mitigate the risks of another foodborne illness. The burrito chain said it's retraining its entire staff, about 70,000 employees, on food safety this week, and it will test employees' knowledge of food safety standards quarterly.

However, the market's reaction in the aftermath of the ordeal seems to signal overwhelming satisfaction with the company's response to the outbreak, as the stock is now at a postcrisis high. That response was considerably different than last year, when the stock fell after the norovirus outbreak and even dropped under $300 after the company said sales growth slowed following it as well.

Now it seems the fear among investors and customers is gone. There are a few possible reasons why.

First, any customer that was already sensitive about foodborne illnesses has probably already stopped eating at Chipotle. Average unit volumes are still down about 20% from before the E. coli outbreak, which likely represents the customers who haven't returned or have significantly cut back their visits. The Chipotle loyalists still inhaling burritos are unbothered by the food safety problems, or they understand that more than 1 million people eat at the company's restaurants every day, so the actual risk to them of getting sick is almost zero.

Also, Steve Ells's departure as CEO removes much of the blame for the earlier incidents from the company, as he was essentially the scapegoat. Niccol is starting with a clean slate and bears no responsibility for past outbreaks, allowing investors to be more optimistic about the problem being resolved.

The lesson seems to be that the company can overcome the kinds of ordinary food safety incidents that often plague restaurants. At McDonald's (NYSE:MCD), for example, about 400 people in 15 states have gotten ill from eating salads there, but that news has been mostly ignored, as there isn't an underlying fear about food safety the way there has been at Chipotle. The best thing for Chipotle would be for the financial media to go back to ignoring such single-store closings the way it does with other restaurants, and that seems warranted considering the investor response the last few weeks.

Should the company experience another E. coli outbreak or something of that seriousness, the stock would likely nosedive and customers would flee again, but it seems as if Chipotle investors are finally safe from the kinds of ordinary foodborne illness risks that happen across the restaurant industry.