A new job posted by the healthcare giant hints that good news could be on the way for Geron.

The job I'm referring to is for a Europe, Middle East, and Africa (EMEA) strategic pricing manager. Johnson & Johnson (JNJ -0.37%) posted this job last week. Once investors became aware of the posting on Friday, shares of small biotech Geron Corporation (GERN -0.88%) soared nearly 29%. That enthusiastic reaction stemmed from just one word in the job description. 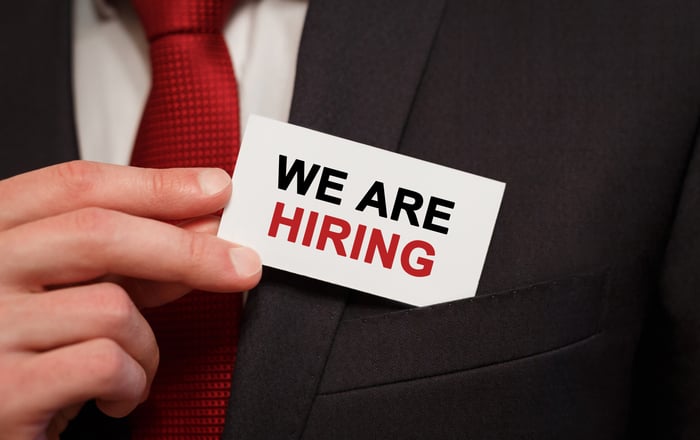 At first glance, Johnson & Johnson's job posting might not seem like such a big deal. A strategic pricing manager, while an important position, doesn't rank very high in the corporate hierarchy for the healthcare giant.

But J&J's job description made it clear that the new position wouldn't only handle pricing for Imbruvica. The EMEA strategic pricing manager will also be responsible for leading the pricing strategy for imetelstat. The inclusion of this one word -- the name of Geron's lead candidate -- served as the catalyst for the small biotech stock's big jump on Friday. And imetelstat was mentioned six times in the job posting.

What's the big deal? Johnson & Johnson is collaborating with Geron on the development of imetelstat. The two companies are evaluating the drug in a phase 2 clinical study for the treatment of myelofibrosis and in a phase 2/3 clinical study targeting myelodysplastic syndromes (MDS).

However, J&J hasn't officially announced if it plans to keep its licensing rights to imetelstat and continue the development of the drug. Geron's management has stated that it expects a decision by the end of the third quarter of 2018 -- only weeks from now.

Investors have been reading the tea leaves to discern what J&J's decision might be. For example, my colleague George Budwell noted a few weeks ago several hints that Johnson & Johnson could be committed to further development of imetelstat. The inclusion of imetelstat in the new job posting is perhaps the clearest signal yet that Johnson & Johnson intends to move forward with development of the drug.

A decision by J&J to advance imetelstat would be tremendously positive for Geron. First, the biotech would receive a much-needed $65 million milestone payment. Second, Geron would continue to have a big partner to fund development. Third, and certainly most important, it would reflect considerable confidence that imetelstat will ultimately prove successful in clinical studies.

Johnson & Johnson could announce its plans regarding imetelstat any day now. At this point, all signs point to a favorable outcome for Geron.

Investors can also expect J&J to announce results from the myelofibrosis and MDS clinical studies of imetelstat in the not-too-distant future. This data would also likely be presented at major medical conferences. Assuming the results from the MDS study are positive, the second part of this phase 3 study should begin in the first half of 2019.

One thing seems almost assured: Geron stock will continue to be volatile. While shares of the biotech soared on Friday following J&J's new job posting, Geron gave back some of those gains on Monday. Even if Johnson & Johnson opts to move forward with imetelstat development, investors could still find themselves on the roller coaster for a while to come.