A closer look at this fast-growing revenue stream.

There's no denying that Apple (AAPL 1.42%) still generates the bulk of its revenue from sales of the iPhone, a now legendary product franchise in consumer electronics. However, the company continues to try to cultivate new revenue streams through the introduction of other product categories. And in recent years, it has become a major player in the wearables market.

In 2015, Apple launched its take on the smartwatch, known as the Apple Watch. This product, as CFO Luca Maestri says, "continues to be the best selling smartwatch by a wide margin." 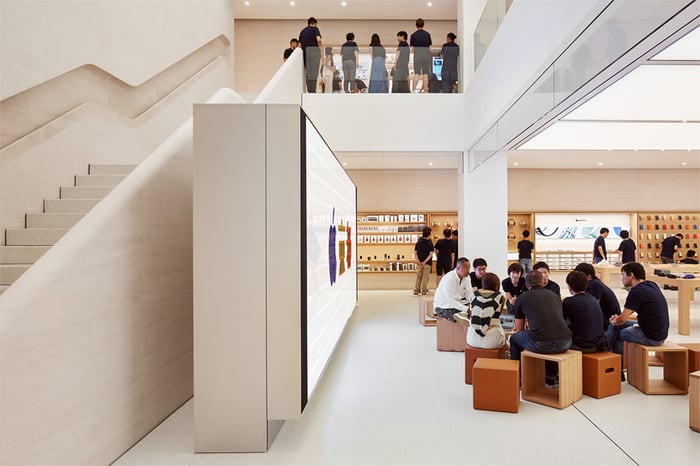 Those wearable efforts aren't just limited to the Apple Watch, either. Per CEO Tim Cook, the company counts sales of its Beats products (the tech titan acquired headphone maker Beats Electronics in May 2014) as well as those of its popular AirPods wireless earbuds as wearables revenue, too.

During Apple's most recent earnings call, Cook told investors that "our wearables revenue exceeded $10 billion over the last four quarters." The executive described this as a "truly remarkable accomplishment for a set of products that has only been in the market for a few years."

Let's take a closer look at how Apple's wearables business performed last quarter and what this means for investors.

Given that Apple's wearables revenue grew by "over 60%", and Apple Watch revenue was up in the "mid-40% range," it stands to reason that AirPods and Beats sales, in aggregate, were up more than 60%.

Apple didn't provide specific growth figures for either AirPods or the Beats product line, but Maestri did say that its AirPods "continue to be a runaway success and we've been selling them as fast as we can make them since their launch a year-and-a-half ago."

Between the fourth quarter of Apple's fiscal 2017 and the third quarter of the company's fiscal 2018, the company generated nearly $255.3 billion in revenue. This means that Apple's wearables business was good for around 4% of the top line over the last four quarters.

That might be relatively insignificant at the moment, but sales of these products are easily outpacing growth from the rest of the business (overall revenue growth of just 17% last quarter). Wearables are only growing in importance to overall business performance, and they take Apple one step further in its ongoing quest to diversify revenue away from the iPhone.

On top of that, Apple's wearables products help strengthen the company's product ecosystem and make it even more difficult for customers immersed in it to switch to competitors. The Apple Watch, for example, requires an iPhone to function. So an iPhone user that's also really happy with the Apple Watch may think twice before switching smartphone brands.

All told, the Apple wearables story is compelling, and investors should keep track of how this business does with each passing quarter.