Maybe you've tried at some point to get rid of a few extra pounds (I know I have...over and over and over again). But General Electric (NYSE:GE) has taken shedding weight to the extreme over the last 10 years. The conglomerate has already changed its portfolio of businesses considerably, and things will change even further in the near future.

Here's how GE has changed in the past decade, and what investors can expect from the industrial giant moving forward.

The stock market hasn't been kind to General Electric lately. Can a restructuring return it to outperformance? Image source: Getty Images.

At the beginning of 2008, just before the financial crisis hit, General Electric was riding high. During the tenure of CEO "Neutron" Jack Welch, who headed the company from 1981-2001, GE's value had skyrocketed. Immediately following his departure, though, the bursting of the tech bubble caused the company's stock -- along with the broader stock market -- to plummet.

However, GE's stock had risen more than 50% since its 2003 lows, and the company's portfolio was incredibly diverse, including a stake in media giant NBC Universal as well as financial and real-estate holdings: 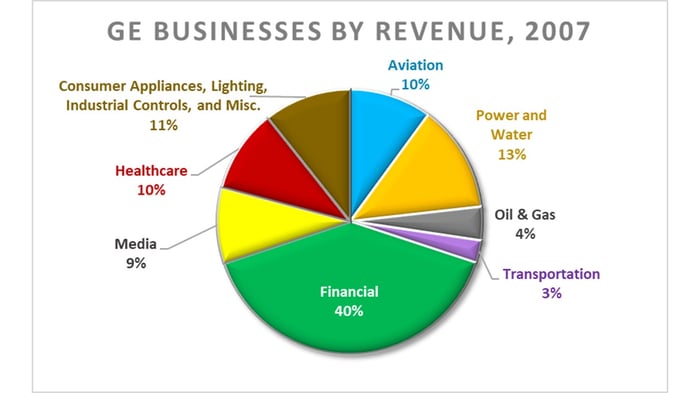 As you can see from the chart, financial and media revenue (the green and bright yellow wedges) made up nearly half of GE's overall revenue in 2007. This was a mixed blessing and a curse for the company. General Electric's media holdings had some of the highest profit margins -- above 20% -- but they really didn't fit in with the rest of the company, meaning there were very few operational synergies. Likewise, while financial services easily made up the largest chunk of GE's revenue, that proved not to be so fortunate when the financial crisis hit and millions of people began defaulting on their mortgages and credit card balances.

The financial crisis was the catalyst that caused then-CEO Jeff Immelt to begin to drastically reconfigure GE's portfolio.

Fast-forward to 2017. Immelt has decided to refocus the company's portfolio on its industrial roots. Gone is the stake in NBC Universal. Most of the company's financial businesses -- including real estate and consumer credit cards -- have been spun off or sold, leaving GE Capital focused primarily on offering credit to the company's industrial customers. GE's iconic-but-low-margin appliances division was sold to Chinese manufacturer Haier. 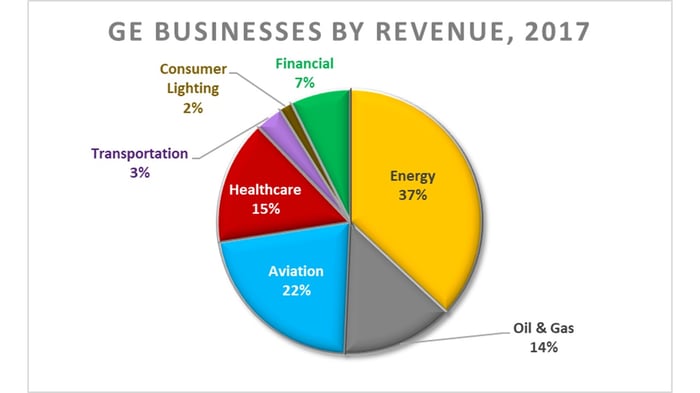 As you can see, some of the company's remaining industrial divisions started small and remained small. For example, the transportation division accounts for just 3% of company revenue in 2007 and in 2017. Most of the other industrial divisions' revenue percentages naturally grew as media and financial revenue was removed from the picture. Energy -- which includes GE's gas and wind turbine businesses -- grew with the acquisition of French company Alstom's power unit.

But oil and gas (the gray wedge in both charts) saw the biggest increase, comprising 14% of revenue in 2017, up from just 4% in 2007, thanks to Immelt's poorly timed acquisitions of oil and gas services companies just before the oil price collapse of 2014. This led to the merging of GE's oil and gas division with oilfield services provider Baker Hughes to form Baker Hughes, a GE Company (NYSE:BKR), in which GE holds a 62.5% stake.

Investors, though, were much worse off than they were in 2007, because more than half of the company's revenue (in energy, oil and gas, and consumer lighting) was generating profit margins of less than 12%, and thanks to an unforeseen insurance charge, the financial division actually lost money for the year.

New CEO John Flannery was left with several unappealing options to try to get the company back on track, and the changes he's made -- while necessary -- have been pretty drastic.

Flannery engineered the sale of GE Transportation to Wabtec, announced plans to unwind the company's stake in Baker Hughes (effectively exiting the oil and gas services sector), and has also put the company's healthcare and consumer lighting businesses up for sale. Key parts of the company's digital assets are also up for sale. Once all this shakes out, here's what the company might look like: 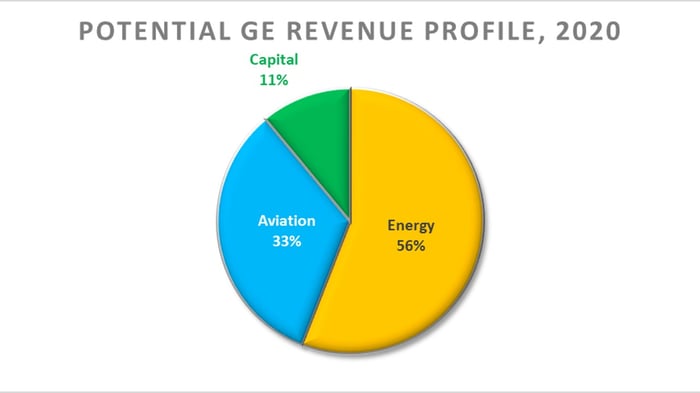 Data based on revenue percentages from 2017 Annual Report, stripping out revenue from businesses that have been sold or are up for sale. Chart by author.

I've used 2017's revenue numbers for each division to create this chart, so it's possible there could be some fluctuation (for example, if sales in the power division continue to decline), but this is roughly what investors can expect GE to look like in 2020.

It's not exactly a pretty picture. Energy sales -- including sales from the power division, which primarily manufactures gas turbines, and the renewable energy division, which primarily manufactures wind turbines -- would make up more than half of the company's revenue. Unfortunately, margins in those businesses aren't holding up thanks to weak gas turbine markets and competitive pressure in wind turbine markets. The company's digital efforts and its Predix platform have been all but abandoned and won't meaningfully contribute to future growth. And with GE Capital hamstrung thanks to its insurance obligations, that leaves the aviation division to do all of the heavy lifting for the company.

Aviation is easily the company's strongest division, reporting a 24.1% profit margin in 2017, which is excellent for an industrial manufacturer. But if it only makes up about one-third of company revenue, will that strength be enough to propel GE to growth?

It's possible that slimming down the company's portfolio will pay off for Flannery and for GE. Selling some (OK, most) of the company's divisions will offer management the opportunity to streamline the corporate structure and reduce costs. The company's outperforming healthcare division is likely to be attractive to buyers, which should help Flannery shore up GE's balance sheet, as will the sale of its stake in Baker Hughes.

But once the dust settles, GE is going to be left with a winning aviation engine business and an energy turbine business in desperate need of a turnaround, with no clear path to overall growth. Maybe GE will continue to radically reshape its portfolio over the next 10 years through acquisitions -- or maybe it will stick with the current simplified structure. Either way, though, outperformance is uncertain, and there are probably better places for your money.