Going into Best Buy's (NYSE:BBY) second-quarter financial report, investors were hoping that the company could once again serve up another better-than-expected performance, similar to what Best Buy delivered last quarter.

The company delivered that and more. For the just-completed quarter, Best Buy reported revenue of $9.38 billion, significantly higher than analysts' consensus estimates of $8.28 billion. Adjusted earnings per share of $0.91 was also better than the $0.83 expected by analysts. Comparable store sales also topped expectations, up 6.2% compared with the 3.7% gain that analysts were anticipating. 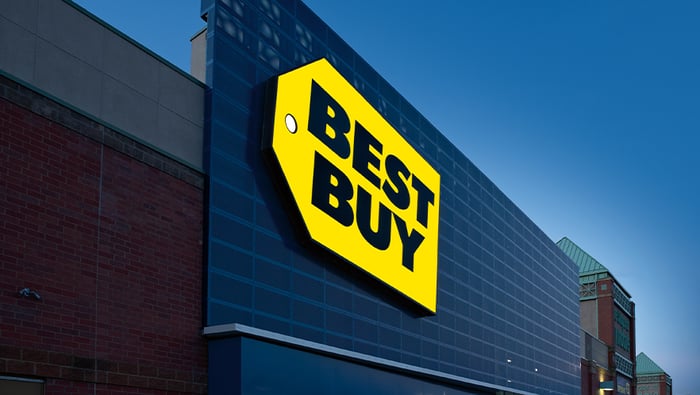 Best Buy continued to generate solid results, most notably its comparable sales, which increased 6.2% year over year at the enterprise level. To get to that metric, the company achieved domestic comps of 6%, while international comps grew an even more impressive 7.6% compared with the prior-year quarter. Comparable online sales grew 10%, as the company continued to blur the line between digital and brick-and-mortar retail.

While comparable online sales increased 10% year over year, it was slower than the 12% increase achieved last quarter and the 31% jump in the prior-year quarter.

The company continued to rein in costs, as its selling, general, and administrative expenses amounted to 20% of revenue, down from 20.5% in the prior-year quarter.

"We are happy to report strong top- and bottom-line results for the second quarter that exceeded our expectations," said Hubert Joly, Best Buy's chairman and CEO. "Our comparable sales growth was helped by the favorable environment in which we operate and driven by how customers are responding to the unique and elevated experience we are building."

Best Buy raised its full fiscal 2019 guidance in light of its performance. The company now expects enterprise revenue of $42.5 billion, give or take $200 million, up from its original projections of $41 billion to $42 billion. Enterprise comparable sales are expected to increase between 3.5% and 4.5% year over year, compared with its original expectations of flat-to-2% growth. Best Buy is also guiding for adjusted earnings per share in a range of $4.95 to $5.10, compared with its original guidance of $4.80 to $5.

For the third quarter, Best Buy is forecasting revenue in a range of $9.4 billion and $9.5 billion, which would represent 1.4% growth at the midpoint of its guidance. The company is also guiding for enterprise comparable sales growth of between 2.5% and 3.5%, and international comps in a range of 2% to 4%. Unfortunately, Best Buy's adjusted earnings-per-share guidance of between $0.79 and $0.84 was significantly lower than the $0.92 analysts were anticipating, and investors promptly bid down the shares by 5%.

Best Buy downplayed those concerns. In a prepared statement, Best Buy CFO Corie Barry said, "We are expecting a non-GAAP operating income rate decline in the third quarter followed by an increase in the fourth quarter ... we remain focused on managing the business for long-term success rather than ensuring a straight-line quarterly operating income rate performance."

Bullish investors hope that Best Buy's long-term strategy will be successful. But disappointment about the near-term is outweighing their optimism -- at least for now.