Even though some macroeconomic numbers and some homebuilders' earnings reports show some housing market fatigue, Lennar's management still sees a multiyear growth opportunity.

Any news search for the term "housing market" these days will likely result in news about home sales slowing down, home inventories increasing, and foreclosure starts being up for the first time in a while. If you ask the management team at Lennar (LEN 2.86%) (LEN.B 3.05%), on the other hand, they will paint a picture that is very different. In fact, Lennar seems to think that the underlying trends in the housing market should fuel growth for 2018 and beyond.

On the company's most recent conference call, management highlighted some of the reasons it thinks the housing market is still going strong and how it is helping the market along with new initiatives. Here are several quotes from management and reasons anyone investing in the housing market should consider them when making investment decisions.

Still chugging along despite strengthening headwinds

Housing is one of those complex markets in which the interplay of several factors can influence home prices and housing starts in one direction or the other. A few factors concerning potential home buyers and investors lately have been the rise in interest rates and rising labor costs for the homebuilding industry, which could put homes out of the affordable range for many buyers. According to executive chairman Stuart Miller, though, there are other factors at play that are more than offsetting the negative effects of these things.

Overall, the housing market has remained strong and seems to continue to strengthen. Even with questions about rising interest rates, labor shortages, rising construction costs and the macro international trade tensions, the housing market has remained resilient. There continues to be a general sense of optimism in the market. Unemployment is at historic lows, the labor participation rate is increasing, and wages are higher.

This trend certainly played out in the company's most recent earnings report, as Lennar reported a 67% increase in revenue compared to the prior year. Granted, a large portion of that gain came from its acquisition of CalAtlantic, which closed in February, but even organic growth was up in the quarter.

Things like interest rates and the general health of the economy are always going to play a part in the homebuilding industry, but they are largely cyclical factors that will come and go with time. The thing that has most homebuilder execs salivating these days is the fact that there is pent-up demand from demographic trends in the U.S. According to Miller:

The deficit in the production of new homes that has existed since the market crash has driven a serious supply shortage, while demand is strong. The millennial population is forming households and having children, so short supply with strong demand is sustaining this recovery and overcoming headwinds. And since land and labor shortages are limiting affordable production, it will still take some time.

From 2009 to 2013, we had a period of the lowest number of housing starts in the U.S. on record. One of the aftereffects of the Great Recession was that the millennial generation, which at the time was just entering the job market, took their first jobs at deep wage discounts compared to the older age cohort with established salaries. That, coupled with student loan debt, meant that many in this age cohort have put off buying first-time homes for years.

Nearly 10 years later, that group is entering the market in droves, and the current housing supply is struggling to keep up. As long as current economic conditions don't change drastically, the next few years could be great for homebuilders.

We have been in a housing bull market for several years now. Even though there are some strong secular trends like the ones mentioned above, there are still those people waiting for the other shoe to drop. After all, this is still a cyclical industry. One factor that tends to be a canary in the coal mine for housing is the creditworthiness of buyers. A telltale sign that a market is getting long in the tooth is when credit scores drop and people start considering more creative financing like adjustable-rate mortgages. According to Lennar CEO Rick Beckwitt, that isn't too much of a concern as of yet.

We are still seeing ability by our customers to qualify for homes across all price points. We have not seen a movement to a variable-rate product on the mortgage side, which is generally the first sign that there is affordability issues, so while there is a lot of focus in the press on rates going up, we got to keep in mind, as Stuart said in his opening comments, that wage growth is real and it's happening out there.

Even more encouraging is that other companies have said credit profiles remain strong for their buyers. On D.R. Horton's most recent conference call, management noted that the average FICO score for the second quarter was a healthy 772, which was the best it had seen in years.

Lots of people are trying to find a reason why this housing bull market won't last, but tidbits of information like this suggest that credit risk isn't a red flag to be concerned about. 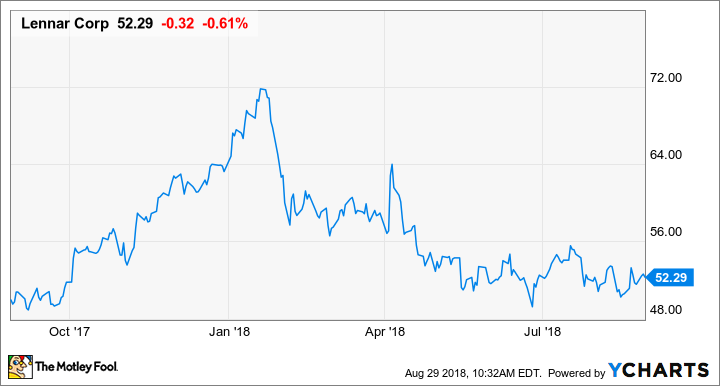 A new model for the housing market?

The way in which we buy and sell homes hasn't changed in decades. It can be a long, drawn-out process that is rarely a pleasurable experience -- so much so that Lennar believes it is a major friction point for people looking to trade up to a larger home in one of Lennar's higher-price-point communities.

That's why Lennar is investing seed money in a new Silicon Valley start-up called Opendoor. Opendoor acts as a middleman in the buying and selling of homes such that the process for both ends of the transaction is much quicker and easier. The business model is very similar to that of online used-car retailer Carvana, but in this case it is for homes instead of used cars.

It might seem a bit counterintuitive for Lennar to invest in a company that makes buying a used home easier. According to Miller, though, Lennar is much more concerned about the selling side of the transaction.

Some potential Lennar customers postpone the move-up purchase because engaging the broker and showing their home over months is a dreaded experience. Opendoor is there to help. Just like selling a used car used to strike fear in the potential new car buyers, selling a used home causes procrastination in the potential move-up purchaser, and Opendoor is there to help. Lennar invested in the Opendoor opportunity to alleviate the stress and friction embedded in our transactions.

If Opendoor takes off, it will be one of the biggest innovations to hit the real estate market in years. While Lennar sees it as a benefit to its current operations by freeing up more potential customers from the troubles of selling their existing home, having seed-round funding in a business like this could also make for an interesting return itself down the road.

The addition of CalAtlantic makes Lennar the nation's largest homebuilder by units sold, which should give the company a lot of benefits of scale. We're already seeing some of the benefits, as the company has the highest market share in 20 metropolitan areas across the U.S., and it's keeping its fixed costs down. The only question worth asking is whether one-time costs associated with the merger become more than just one-time costs. If that issue resolves itself over the next couple of quarters, then Lennar's stock looks pretty attractive at its current valuation.