Please ensure Javascript is enabled for purposes of website accessibility
Free Article Join Over 1 Million Premium Members And Get More In-Depth Stock Guidance and Research
By Steve Symington - Sep 1, 2018 at 11:00AM

The Roomba maker continued to rebound in a big way last month following its second-quarter report in July. Here's what investors need to know.

To be clear, there was no significant company-specific news last month that might otherwise have driven iRobot's gains. Rather, iRobot shares gradually drifted higher throughout the month as the market absorbed the implications of its latest quarter. 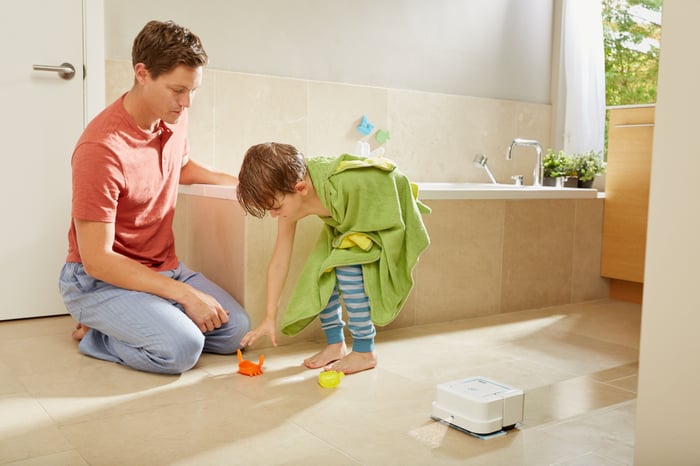 Then again, the rise shouldn't have come as a complete surprise. In fact, I singled it out as a top stock to buy at the start of last month despite its more than 20% post-earnings pop the week before.

To justify my optimism, I noted that shares were still down more than 25% over the previous year at the time, primarily driven by an equally violent post-earnings drop in February when the company told shareholders it would forsake bottom-line profits in order to invest in driving revenue growth. According to company founder and CEO Colin Angle at the time, iRobot believes that over the next several years "the true winners in the consumer robot industry are going to be determined for the next decade" -- hence its long-term-oriented decision to solidify its brand and take as much market share as possible in these early stages of growth.

And it seems an understatement to say that iRobot is succeeding to that end so far. After raising its full-year guidance in tandem with its Q2 report, iRobot now sees 2018 revenue climbing a solid 21.5% year over year to $1.07 billion.

What's more, Angle promised several new product releases from iRobot in the second half of the year. The first of those launches should arrive any day now, and will include iRobot's "next offering of high-end innovation at lower price points."

If all goes well there, that should position iRobot nicely for the coming holiday season. And with shares now up a relatively modest 17% over the past year even after last month's big rise, I think the stock should have ample room to extend its gains.