Please ensure Javascript is enabled for purposes of website accessibility
Free Article Join Over 1 Million Premium Members And Get More In-Depth Stock Guidance and Research
By Tim Beyers - Sep 3, 2018 at 8:05AM

The same software and data science that brings styled apparel to your door is helping Stitch Fix to become a leaner, more efficient business.

Would you trust a company that doesn't use its own products, especially if it claims its products are driven by exceptional, data-driven insights? I thought not.

But what about the reverse? Stitch Fix ( SFIX 1.68% ) is employing the same software and data science it uses to personalize "fixes" to improve its logistics, and operating efficiency is up noticeably as a result. That's an Amazon.com-like capability, and it should help widen the company's competitive moat, improve margin, and increase cash flow. 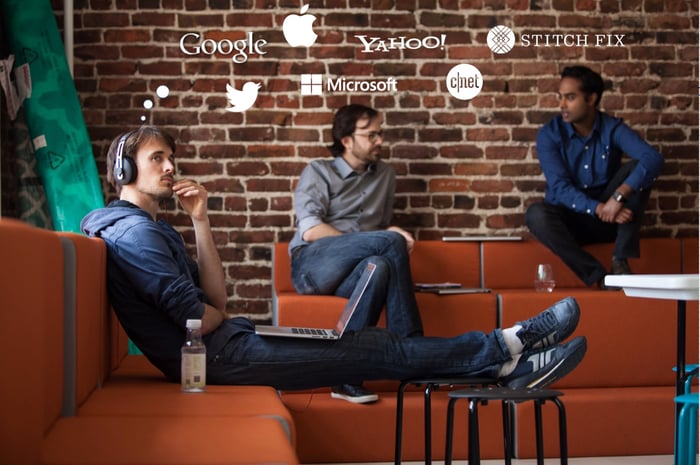 Surprised? You shouldn't be. Spend any amount of time around the Stitch Fix site and its companion technology blog, Multithreaded, and you'll see the company's product is data. It's almost as if the Stitch Fix team, led by founder Katrina Lake, is on a mission to do really cool things with data. Owning the e-commerce box industry will just be the byproduct.

For example, here's what I consider to be the key paragraph in the company's blog post offering advice to data scientists looking for their next gig. Emphasis is mine. Call it a not exactly subtle pitch to choose Stitch Fix over the big tech names in the preceding photo:

Finally, don't fixate on big data. The rising prominence of the data scientist has coincided with the rise of Big Data, but they are not the same thing. Sheer scale does not necessarily make data interesting, nor is it necessarily required. Look for data with high information density rather than high volume, and that supports applications you find interesting or surprising. This enables you to spend most of your mental energy on analysis and framing rather than on efficient data processing.

Translation: Come and work for us, and you'll get to see what data can really do. You'll have a direct impact on our business, and on the lives of our customers.

Maybe that sounds like shtick. I get it. The thing is, Stitch Fix is actually putting its technology to use for the betterment of its business -- eating its own cooking, you might say. Stitch Fix's warehouse operating efficiency improved 15% in the latest quarter as a result of a series of data-driven experiments.

Here's how Chief Operating Officer Mike Smith explained it in a conference call with analysts, according to a transcript from S&P Global Market Intelligence (emphasis mine):

Last November, we piloted a program in one of our warehouses to further integrate our technology and proprietary algorithms to our Fix picking process. By April 2018, we had expanded this initiative to all five of our distribution centers and across both men's and women's apparel. Shortly after this expansion, we drove the most efficient, operational week in Stitch Fix's history. Overall, this initiative has driven a 15% improvement in our warehouse efficiency, resulting in significant cost savings. We believe that many opportunities remain to leverage our engineering and data science capabilities to drive efficiencies and plan to update you on these in the quarters ahead.

That's a bold claim. How will we know it's working for shareholders and not just Stitch Fix's internal operations? By checking in on operating margin and unidentified sales, general, and administrative (SG&A) spending as a percentage of revenue. The latter most likely reflects a portion what Stitch Fix spends on R&D and data science infrastructure -- unidentified SG&A topped $300 million in fiscal 2017, or 30.7% of revenue. Does that mean Stitch Fix spends 30% of revenue on R&D? Not necessarily, since this is a capital-intensive business with a wide network of stylists. But it wouldn't surprise me at all to see at least half that $300 million devoted to improving the data science behind the fixes.

Watch for long-term, marginal increases in operating margin as SG&A spend decreases as a percentage of revenue.

And if we don't see this? What then? We'll know that Stitch Fix's technology, great as it seems, has limits, and I'd factor that into the valuation. But I don't see that happening. Rather, I see a business run by a passionate founder with a big vision and the data to fulfill it, which is why I expect to own this stock for at least the next decade, and possibly longer.