IDC says the wearables market grew to 27.9 million units in the second quarter.

Apple had leapfrogged its closest rivals in the wearables space -- Xiaomi and Fitbit -- in the first quarter to become the top dog, according to IDC. The broader market grew a modest 1% that quarter to 25.1 million, and when you look at just the smartwatch subset of the broader wearables market, Apple outsold everyone else combined. The company is also widely expected to release a redesigned Apple Watch Series 4 later this month.

Ahead of that expected unveiling, the Mac maker is maintaining its lead. 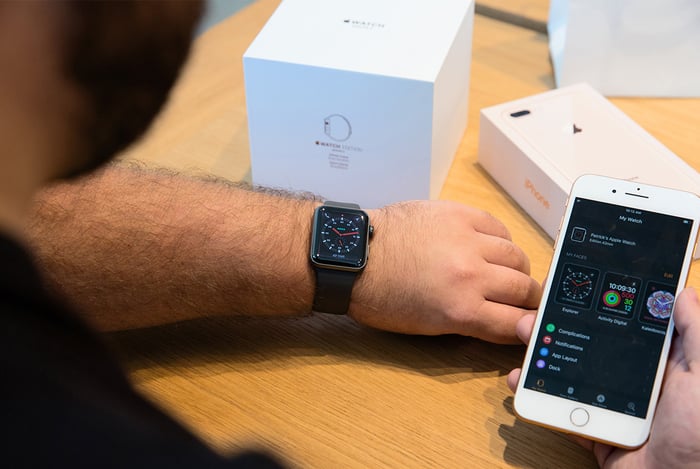 Apple is still No. 1

IDC has just released its estimates for the wearables space in the second quarter. The market researcher says the market accelerated a little, growing 5.5% to $27.9 million units. In dollar terms, it grew 8.3%, driven by the rising prices of wearables as consumers shift toward smartwatches, according to IDC.

Developed markets like North America, Japan, and Western Europe contracted as sales of basic wristbands fell. That form factor is still proving popular in emerging markets, though, helping them grow 14%. IDC believes that basic wearables will have a place in the market for quite some time, as there is still demand for lower-cost wearables in certain markets. Basic wearables are now seeing "slower declines," according to IDC research director Ramon Llamas, which could suggest unit volumes are finding a floor.

Here's how the top five players fared in the second quarter.

Apple's cellular-equipped Apple Watch continues to be a strong seller, and the forthcoming watchOS 5 will not support first-generation Apple Watches (including those that cost as much as a car), which could spur upgrades, in IDC's view. Xiaomi maintained its No. 2 position in terms of unit volumes as the company's ridiculously diverse product portfolio (most of which is developed by "ecosystem partners" that Xiaomi invests in) continues to grow, including wearables. For example, Xiaomi introduced a cellular-equipped smartwatch for kids, the Mi Bunny Watch 3, in July.

As a victim of smartwatch cannibalization, Fitbit lost share in the second quarter, as its unit volumes have long been dominated by the basic trackers that are losing traction in its largest markets. The good news is that Fitbit is putting together a turnaround on the strength of its Versa smartwatch, which is more affordable and features an approachable design. Still, that doesn't mean Fitbit will become wildly profitable either, though. IDC believes Fitbit is now the No. 2 player in smartwatches, shipping 1.1 million smartwatches during the quarter.

As we approach the holiday shopping season, Apple probably won't be the only one to announce new smartwatch products. While Apple Watch Series 4 will inevitably get the most attention, Fitbit CEO James Park said in May that the company has more "exciting new products" in store by year's end.