In late May, Kinder Morgan (NYSE:KMI) and its Canadian subsidiary Kinder Morgan Canada Limited (TSX:KML) made the tough decision to sell their controversial expansion of the Trans Mountain Pipeline to the Government of Canada, as opposed to continuing to press forward with the project. It was a questionable choice at the time because the company was giving up a project that had the potential to have a noticeable effect and was a key component of its growth strategy. However, in light of a recent court decision in Canada, the move turned out to be a brilliant one in hindsight.

Last week, the Canadian Federal Court of Appeal ruled that the country's regulatory process involving that pipeline expansion project was "impermissibly flawed." Not only did the government fail to include project-related tanker traffic, but it didn't fulfill its legal duty to consult with First Nation groups (the indigenous people of Canada). That ruling will put an immediate halt to construction of the project. 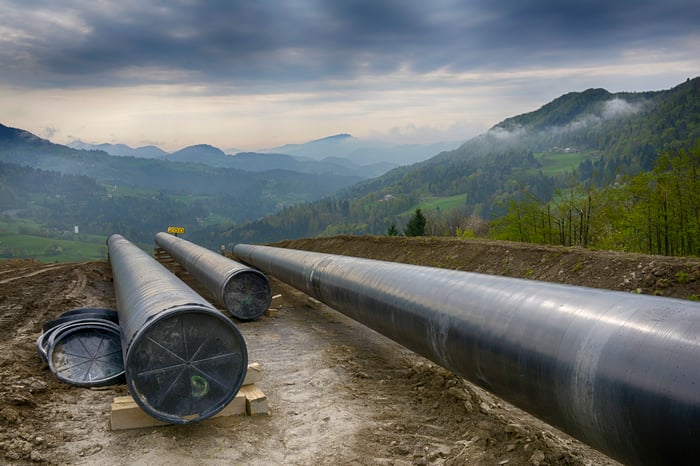 As a result, the pipeline project will likely need to undergo an extended review of its scope to take into account the tanker traffic. While the Government of Canada can appeal this ruling, it might need to start the entire approval process from scratch. It's a worst-case scenario for the pipeline's new owner since it can no longer flip the project to another buyer as initially planned.

While the court's decision raises new questions about the future of the Trans Mountain Pipeline expansion project, that's no longer Kinder Morgan's concern because a positive outcome from the court review wasn't a condition of its deal with the Government of Canada. In fact, the ruling made it even easier for shareholders of Kinder Morgan Canada to approve the sale of the pipeline to Canada, which they did late last week, enabling the company to officially close the 4.5 billion-Canadian-dollar ($3.4 billion) transaction.

With that pipeline and its controversial expansion project now off the books, the next step for Kinder Morgan and its Canadian subsidiary is to decide how to allocate their after-tax windfall. The board of Kinder Morgan Canada expects to announce its decision on how it will use those proceeds after markets close today. It will likely unveil a significant cash distribution to shareholders either through a stock buyback or special dividend. The expectation is that Kinder Morgan will receive about $2 billion in cash from that distribution, which it intends on using to repay debt.

An even stronger foundation

If that's the case, it would likely push the company's leverage ratio (net debt-to-adjusted EBITDA) from 4.9 -- as of the end of the second quarter -- to around 4.5. That's well below the company's current target of 5, though it plans on revisiting that goal after closing the sale, so it's possible that it will aim for a lower leverage ratio. That could earn it a credit rating upgrade, which would enable the company to benefit from the associated improvement in borrowing costs and financial flexibility.

It's also possible that the company could make changes to its capital allocation strategy. With its balance sheet the strongest it has been in years, the company likely doesn't need to fully fund capital expenses with cash flow going forward. Instead, it could use some incremental debt to finance a portion of its growth projects while still maintaining a lower leverage ratio. That would potentially allow the company to increase the percentage of cash flow it returns to investors via dividends and buybacks over the next few years. However, with 25% annual dividend increases already planned for 2019 and 2020 -- and its valuation currently the lowest among its peer group -- an increase in the stock buyback program would seem to make the most sense.

Kinder Morgan's decision to hand over the Trans Mountain Pipeline expansion to the Government of Canada has turned out to be the right one in hindsight. Not only did the company avoid the headache of having to deal with an unfavorable court outcome that will likely delay construction for quite some time, but it now has a large cash pile to use as it pleases. Those two factors have combined to significantly improved the company's risk profile, which should eventually lift the weight that has been holding down its stock price.