Get to know this high-flying cloud stock.

One of the biggest tech IPOs so far this year was Pivotal Software (PVTL), a cloud application platform provider. The stock has had a successful run so far, surging since it debuted in April and beating estimates when the company reported its first batch of quarterly results in June. Here are seven things investors should know about this fast-growing cloud company.

1. Pivotal is a platform-as-a-service provider

Pivotal's core product is Pivotal Cloud Foundry (PCF), a cloud application platform that allows developers to manage applications instead of infrastructure. PCF adds proprietary software to Cloud Foundry, which is open-source. The company also offers subscription services, like databases and security services, through its marketplace that can be integrated with PCF. These include services created by Pivotal as well as third-party services.

PCF supports applications in a variety of programming languages, containers, and serverless programming through its function service. 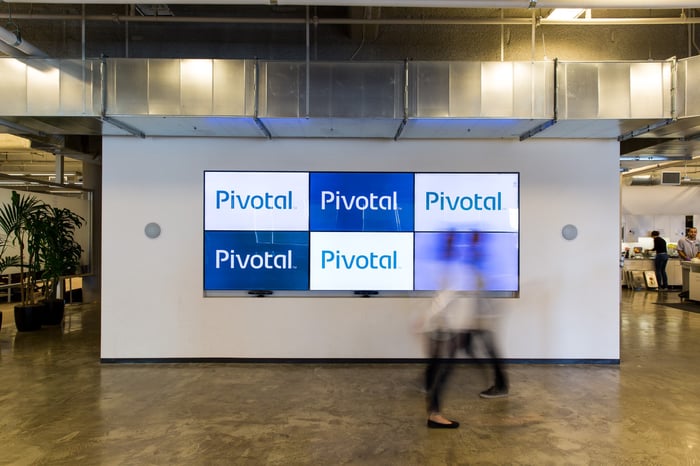 PCF can also be used on Amazon Web Services, Google Cloud, and Microsoft Azure. It also supports VMware's vSphere and the open-source OpenStack, allowing the platform to be used in private data centers. The company is betting that enterprise demand for multi-cloud and hybrid-cloud solutions will grow along with the broader cloud market, allowing it to tap into an opportunity that some of the bigger public cloud companies are ignoring.

3. Most revenue comes from subscriptions

Pivotal had 339 subscription customers with contracts valued at or above $50,000 annually at the end of the first quarter, up from 282 at the same time last year. The company expects the launch of its latest version of PCF, which included support for containers, to drive further growth in customer count.

4. It's growing fast and losing money

Pivotal's total revenue grew by 28.5% year over year to $155.7 million in the first quarter, which doesn't seem all that impressive for a growth company. But the company achieved that growth rate despite a slight decline in services revenue. Services generated $65.6 million of revenue, down from $67.8 million in the prior-year period.

Subscription revenue growth was much quicker, coming in at 68.7%. The overall growth rate could rise as subscriptions become a larger part of the overall business. This rapid growth comes with significant losses -- Pivotal posted a net loss of $32.5 million in the second quarter. But the bottom line is moving in the right direction, in part because the services segment carries much-lower margins than subscriptions.

5. There's a lot of competition

While PCF is available on third-party cloud platforms, Pivotal also competes directly with those platforms. AWS, Google Cloud, and Microsoft Azure all offer the same type of platform-as-a-service functionality. IBM Cloud does as well, using its own variant of Cloud Foundry. There are also other open-source offerings and legacy infrastructure and middleware to contend with.

6. It's a controlled company

While Pivotal went public earlier this year, investors have no say in how the company is run. Dell Technologies owns 68.3% of all outstanding shares of Pivotal, with a voting power of 95.6% thanks to a dual-class share structure. Dell owns none of the Class A shares available for public trading but all the Class B shares, which come with enhanced voting power.

The relationship between Pivotal and Dell also introduces some risks. Pivotal derived 37% of its revenue in fiscal 2018 through transactions processed through strategic partners under the company's agency agreements with Dell and its subsidiaries. Any change to those arrangements could be detrimental to Pivotal's results.

7. It's an expensive stock

Shares of Pivotal have soared since the company went public. The stock currently trades for around $28 per share, well above the $15 initial offering price. That puts the company's market capitalization at about $7.2 billion.

Pivotal generated $509.4 million of revenue in fiscal 2018, which ended in February, good for a price-to-sales ratio of just over 14. That's a high price to pay, especially since the company posted a net loss of $163.5 million in fiscal 2018. Pivotal doesn't appear to have any significant competitive advantages, except perhaps its multi-cloud focus. But the amount and intensity of competition in the cloud computing business makes it hard to justify that valuation, at least in my book.

Pivotal is a high-flying stock that I wouldn't invest in at today's prices, but it's still a company to keep an eye on as the cloud computing industry matures.