Cimarex Energy Co's (NYSE:XEC) stock lost another 12.4% of its value last month, pushing its year-to-date decline to more than 30% as it continues to be one of the worst-performing oil stocks in the S&P 500 this year. Fueling the oil company's slump last month was its lackluster second-quarter results, which led JP Morgan to downgrade the stock.

Cimarex Energy reported $151.9 million, or $1.59 per share, of adjusted net income for the second quarter, which missed analysts' expectations by $0.04 per share. One of the issues was that its oil production fell 5% from the first quarter to an average of 61,600 barrels per day. On top of that, the company captured lower oil and natural gas prices in the quarter due to pipeline constraints in the Permian Basin. Despite those weaker numbers, Cimarex Energy expects its oil production to rise 20% to 25% this year even after factoring in the sale of some non-core assets. 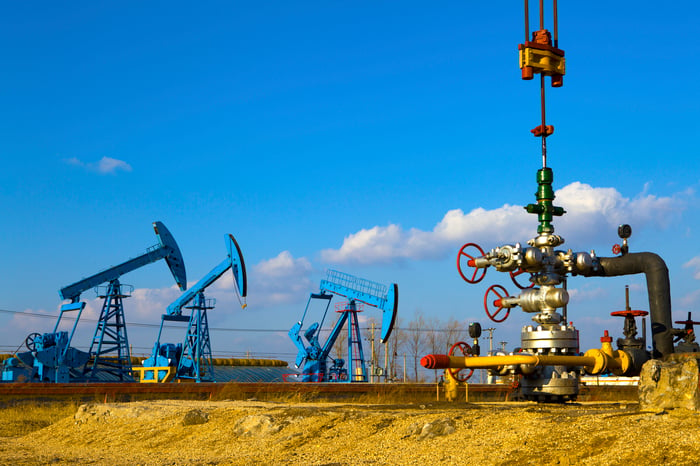 However, JP Morgan has its doubts about whether the company can achieve its growth targets. Because of that, the bank downgraded Cimarex Energy's stock from outperform to neutral and slashed its price target from $125 to $100 a share. Among the bank's concerns is that Cimarex Energy's margins will be under pressure due to lower regional oil and gas prices in the Permian until new pipelines come online toward the end of next year.

Cimarex Energy believes it has done enough to address these concerns by locking in sales agreements for the bulk of its oil and gas output for 2019. Because of that, the company continues to project that it can grow production at a 10% compound annual pace through 2021 (with oil expanding at an even faster 13% clip) while generating $500 million to $600 million in free cash over that time frame. With a low leverage ratio and a cash-rich balance sheet, Cimarex could use some of its excess cash to buy back its beaten-down stock, making it an increasingly interesting oil stock to watch.