The virtual reality market fell for the second consecutive quarter.

The virtual reality (VR) headset market is having a terrible, horrible, no-good, very bad year. Yesterday, market researcher IDC released its estimates on the VR market in the second quarter, and things aren't looking so hot right now for the technology that Facebook ( FB -1.14% ) is betting big on with its Oculus subsidiary. 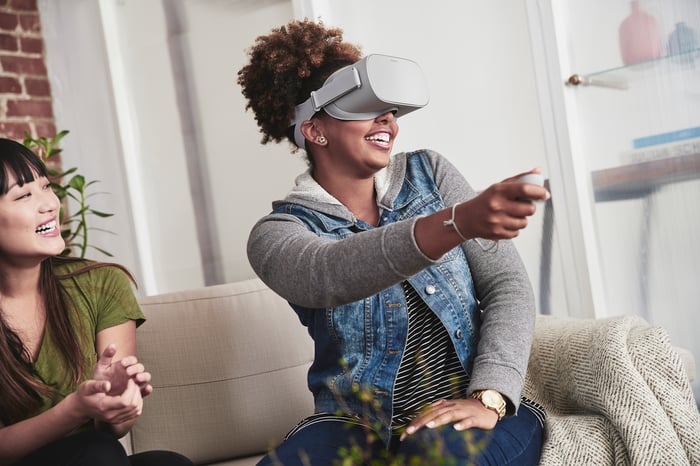 The first half of 2018 has been rough for VR

Global unit volumes of VR headsets fell by 34% in the second quarter, according to IDC (though it didn't specify a precise figure). That comes after the researcher said in June that VR and augmented reality (AR) headset volumes combined fell 31% in the first quarter to 1.2 million. However, there are different categories of VR headsets, and each category is seeing different trends play out.

Screenless viewers, which allow users to strap their phones to their faces, are losing traction: Unit volumes fell from 1 million headsets a year ago to just 409,000 in the second quarter. IDC says this category's decline was the largest contributor to the broader VR space's weakness. These low-cost accessories helped spur some initial interest and adoption, but perhaps consumers realized that putting phones on their faces didn't create a particularly compelling VR experience.

Tethered VR headsets, which are typically connected to a high-end gaming PC, saw units fall 37%. That's partially the result of a tough comparison, as the dominant players here like Oculus and Sony enjoyed robust sales a year ago thanks to aggressive promotional activity. Oculus shipped about 102,000 headsets during the quarter, while Sony shipped 93,000. HTC actually came out on top, with 111,000 units following the launch its Vive Pro, a high-end VR headset that costs $800 and supports 3K resolutions.

Stand-alone VR headsets, which process all content within the device itself and do not require a separate PC, saw shipments soar 418% to 212,000, driven by the new Oculus Go and Xiaomi Mi VR. (Xiaomi actually manufactures both the Go and Mi VR and the headsets share the same hardware.) Oculus Go launched in May, and hopes to bring VR to the masses with an affordable $200 starting price and greater convenience and mobility.

Hope on the horizon?

Despite two consecutive quarters of 30%-plus declines, IDC remains optimistic going forward. The researcher believes VR still has plenty of upside overall, thanks in part to a steady stream of new product introductions like the Go and Vive Pro, combined with ongoing technological improvements.

The enterprise side of the market in particular has promise, as commercial pilots and deployments are on the rise as companies try to find ways to use VR to make employees more productive. IDC estimates that a full 20% of headsets shipped in the second quarter were heading to the commercial sector. Consumer adoption, on the other hand, is taking a bit longer than hoped. "IDC expects commercial buyers to represent an increasingly important percentage of the market going forward," says IDC's Tom Mainelli.