Please ensure Javascript is enabled for purposes of website accessibility
Log In Help Join The Motley Fool
Free Article Join Over 1 Million Premium Members And Get More In-Depth Stock Guidance and Research
By Travis Hoium – Updated May 11, 2018 at 3:05PM

Virtual reality headsets haven't gone mainstream yet, but Facebook is hoping to change that.

Earlier this month, Facebook's (META 2.67%) Oculus Research subsidiary launched the Oculus Go headset at F8, the Facebook Developer Conference. (This week, Oculus Research changed its name to Facebook Reality Labs.) Mark Zuckerberg announced that the 32 GB version of the stand-alone headset would sell for $199, while a 64 GB version will be $249; both were available for immediate purchase.

Oculus Go is probably the most anticipated virtual reality product ever to be released, because it's the first high-quality VR headset with a mass-market price point. It doesn't need an expensive gaming computer to function or an engineering degree to operate; it's a truly stand-alone product made for the masses.

Here's why it's such a big deal, and where we can expect to see the best use cases for Oculus Go. 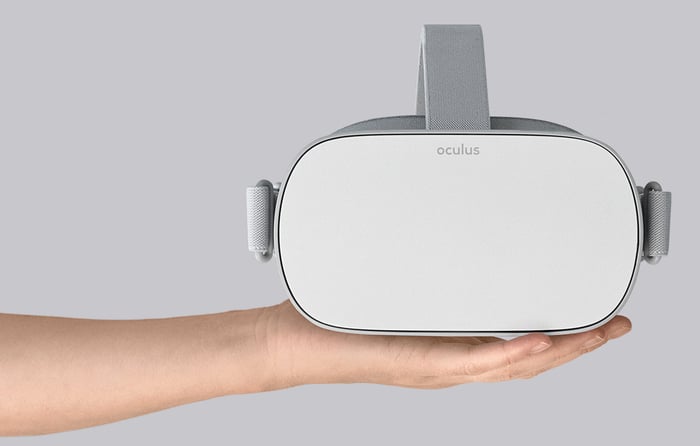 Oculus Go is a stand-alone VR headset with integrated speakers and a dedicated screen. It's a lot easier to operate than a clunky headset you put a smartphone into and a lot less expensive than high-end Oculus Rift or HTC Vive, which start at $400 for a headset and require a VR ready computer that can costs thousands of dollars more. Oculus Go isn't as advanced as high-end VR headsets because it doesn't have tracking that follows your movement around a room, but it's a great entry point for consumers wanting to get into VR at a reasonable price.

The $199 price point should expand the VR market beyond the few million high-end VR headsets that leading edge consumers have bought so far and will be critical in Facebook justifying the $3 billion it paid for Oculus in 2014. According to Superdata, the consumer VR industry could grow from $2.2 billion in 2017 to a projected $19.0 billion in 2021 and Oculus Go will be key to Facebook owning a significant chunk of the market.

The Oculus Go may be the product that gets a critical mass of consumers to buy into VR, and that expanded user base might finally get content makers interested in VR as well.

One of the things holding virtual reality back today is the lack of great content for the headsets that are available. But until the installed base of headsets grows, there's little incentive for major developers to invest in content.

Despite a lot of hype when Oculus Rift and HTC's Vive launched, they have very small installed bases of VR headsets. Sony has the largest base but has sold just over 2 million VR headsets, compared to more than 70 million PS4 consoles. Oculus and HTC don't release their sales volumes, but estimates are that fewer than 250,000 units are sold each quarter, so there are roughly 1 million of each headset installed worldwide. With such a small installed base, content developers have a hard time justifying spending millions of dollars building phenomenal content. But headset sales are also held back by the lack of great content. It's a classic chicken-and-egg conundrum.

Oculus Go is inexpensive enough that it could drive growth of the VR installed base even without killer content. And if the installed base of Oculus Go headsets reaches a critical mass, it'll attract a slew of content from developers.

When people think VR, they immediately go to games, but the reality is that there are a lot of different content styles that lend themselves to the immersive experience. If you've watched any NBA playoff game in 2018, you know that Intel has been pushing its 360 video VR content hard, but few consumers have headsets capable of viewing the content. Oculus Go could bring this kind of content into more households.

Facebook is also doing its part to help the cause with content. As Oculus Go was launched, the company announced the launch of Oculus TV, which will bring television content into virtual reality. The product will launch later this month with Facebook Watch, Red Bull TV, and Pluto TV directly at launch, but expect that Netflix, Hulu, and others will likely follow. In another deal, NextVR, which delivers live sporting events in VR, is going to be part of the Oculus Venues platform, which aims to bring live content to consumers in VR.

Facebook has an incentive to get VR content on the Oculus Go platform, and it looks like sports and 360 videos will be the biggest investments early on. But as long as the installed base of Oculus Go headsets grows, we should see content flow to the platform.

Oculus Go is an important product in virtual reality because it's the first time an easy-to-use, VR-specific headset has been launched at an accessible price point. If Facebook can get the device into millions of people's hands, it could take a big lead as the VR platform of choice for both consumers and developers.

That's a position that could make Oculus an industry leader, and it'll make Facebook's 2014 acquisition look like a brilliant long-term move.