When Facebook (NASDAQ:FB) bought Oculus in 2014, Samsung released Gear VR in 2015, and HTC released the Vive in 2016, it seemed like the world of virtual reality was upon us. Soon, we would all have VR headsets and we could live in a world of our own with the convenience of being at home. But Oculus Rift, Gear VR, and HTC Vive haven't exactly become household devices, and there are signs companies are starting to realize the disappointment.

Facebook recently lowered the price of its Rift headset from an original $800 to $399 for a short-term sale, ultimately settling on $499 recently. You don't discount a product that's selling like hotcakes, indicating that Oculus's flagship product isn't living up to expectations. According to SuperData, HTC Vive isn't selling much better. Is VR doomed to disappoint, like 3D TV did, or is the industry just setting up for growth? 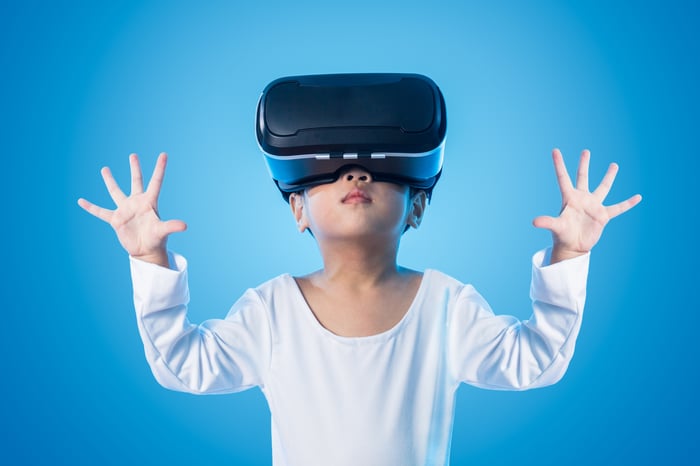 Rather than becoming a big business, VR has thus far been a small hobby for VR companies. According to Venture Beat and data from SuperData, the immersive VR systems of HTC Vive and Oculus Rift are selling fewer than 100,000 units per quarter. And while Gear VR and Alphabet (NASDAQ:GOOG)(NASDAQ:GOOGL) subsidiary Google's Daydream are selling more units, they're less expensive and less advanced and may be given away for free.

To attract developers and content creator, hardware companies need to increase adoption rapidly. And they're not doing that today.

VR hardware isn't at all consumer-friendly

The problem with early VR systems is that they're either not powerful enough or so powerful they're difficult to use. Samsung VR uses common Samsung headsets, as does Google Cardboard, which limits their processing power. Sony (NYSE:SONY) Playstation VR requires a console and Oculus Rift and HTV Vive require high-powered computers, which aren't exactly items the average person has in their home today. The hardware dynamic doesn't make VR easy to adopt, even for early adopters.

Compounding the problem facing VR is that content is very limited. There aren't a plethora of immersive games people can spend days playing, like you could do on a console, or video content that would make movies a viable reason to go VR. And this is where we get into the chicken-and-egg challenge VR companies will face going forward.

If there was either amazing hardware or amazing content in VR, it may drag the other along, creating a virtuous cycle of adoption. But hardware isn't amazing yet and content that could attract users hasn't emerged yet.

People seem to have come to terms of the fact that VR while an unbelievably wonderful innovation for how you consume interactive entertainment and all forms of entertainment for that matter is going to take a couple of years at least to going to get to a point where it is truly a mass-market consumer opportunity.

In other words, content creators think VR will be big someday but not today. And they're not going to take a chance investing on the bleeding edge.

VR is definitely an interesting technology, but hardware costs need to come down and content and quality need to improve to grow the industry. I think the early phase of growth will be in location-based VR, much like arcades were the home of the video game industry in the 1970s. Once computing power catches up, maybe it will make sense for VR to be something everyone has in their home.

The bottom line is that VR just doesn't move the needle for most big companies yet -- and it may not for years to come.