For centuries, people have used science to find ways to improve society.

Civic and mechanical engineering harnessed the principles of physics to erect buildings, cities, and modes of transportation. Chemical engineering exploited the interaction of molecules to create customized chemicals and consumer products.

But biology is the scientific field with perhaps the greatest ultimate potential.

Biology describes the fundamental building blocks of all living things. And from the invention of the microscope to DNA sequencing, we've gotten much better at looking at and learning about those building blocks. But only recently have we been able to arrange and build them ourselves, to create things that could improve society.

This new field of scientific engineering -- coming to be known as synthetic biology -- is becoming one of the fastest-growing areas within all of life sciences. And it will have a rather significant impact on our society at large. 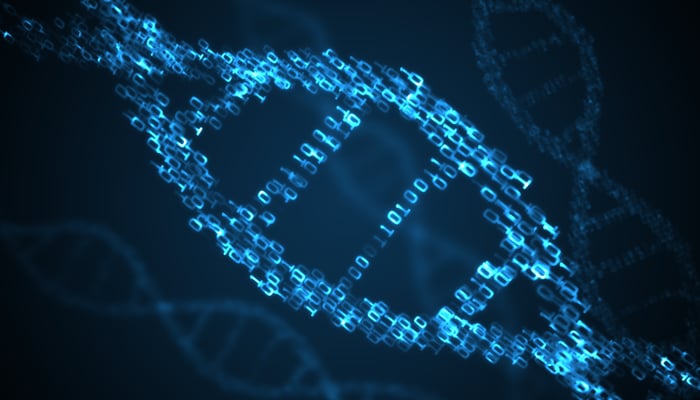 The next IT industry?

Many are already referring to synthetic biology as "the next IT industry." And the comparisons make sense for a couple of reasons.

Moore's Law accurately predicted that the transistor density on integrated circuits would double every two years. This drove down the cost of computer processors, allowing Intel (NASDAQ:INTC) to build a $500 billion vertically integrated empire. Intel's silicon-based chips could process billions of operations that were built upon the binary 0s and 1s of computer data. This paved the way for the enterprise software industry, the dot-com boom, and artificial intelligence. Forward-looking investors made billions of dollars during that 20-year computing renaissance.

The same thing is happening in life sciences today. Illumina's (NASDAQ:ILMN) machines are exponentially driving down the costs of genomic sequencing, which reads and arranges the As, Cs, Gs, and Ts of a living thing's genetic code. Just as Intel built processors that built upon computer data, companies are now developing bioreactors to build upon that genomic data.

The leader in this exciting new field is Ginkgo Bioworks, which accounts for nearly half of the world's synthetic DNA output. Hailing from research developed at MIT, Ginkgo's goal is to produce biology at scale, using machine-learning computations to design customized protein molecules.

That means they're actually printing the base pairs of DNA -- arranged in the proper sequence -- to synthetically create living things. One example is their recent joint venture with Bayer (OTC:BAYR.Y) to engineer microbiome enzymes for soil, which is helping crops better absorb fertilizer nutrients and produce a better yield.

But that's just one application. As of July, Ginkgo is now synthesizing 50 million base pairs of DNA every month. Their biofoundries have doubled in output every six months for the past three years.

To get a closer look at the developments, I recently spoke with Ginkgo's Chief Commercial Officer Matt McKnight. In the following video, Matt defines synthetic biology, describes how Ginkgo is using it with Bayer, and gives examples of how it could be applied for other large-scale opportunities.

A full transcript is provided below.

Matt, thanks again for joining me this morning.

Matt: At the highest level, it is one of the most amazing technologies that we have yet to tap in manufacturing. So if you think about your high school education. You took physics. Somebody figured out to turn physics into building buildings that don't fall down any more.

Today, we're on the cusp of taking our last high school class discipline, biology, and this is -- at the highest level (and all of my colleagues would look at me and say, "It's much more complicated than that, Matt.") -- but we're on the cusp of taking biology and saying this can be an engineering discipline that is predictable that we can use to manufacture everything around us.

And if you think about it, the fact that we don't manufacture everything around us, when the world is created by biology, the largest things: the forests. The smallest things: 30,000 RPM motors and the size of the smallest computer chip are all made by biology. Yet we don't have the tools today through which we can predictably and with high probability use biology as an engineering tool for humanity.

So, what is synthetic biology? It is the process of taking DNA, which is just 0s and 1s, like a computer, it just happens to be four of them: A, T, C, and G. Synthesizing DNA and putting those into cells, which are manufacturing tools. Telling those cells, these are the instructions we want you to make. We want you to eat sugar, we want you to do something and make a product. And that is synthetic biology. It is DNA that we create our own sequence of 0s and 1s, or A, T, Cs, and Gs. Put them into cells. And tell those cells that we want to make them something that humans can use. And that's the most basic version I can give you.

Simon: So ground-level, we are engineering things from the ground up, creating really cool products to do neat things out of them.

Matt: Things that we've never been able to do in the history of human control of different parts of our environment around us.

Simon: One of those things, we saw a JV that you guys just formed last year with Bayer, called Joyn Bio, which is actually being used in the agricultural industry, can you tell us a little bit about what this JV is aimed at accomplishing?

Matt: Yeah, I think it's important to start within the context of synthetic biology: What is Ginkgo trying to do?

So what we've said is, our mission ... and it's the mission that we've put in front of our team every month, is to make it easier to engineer biology, and to make it cheaper to engineer biology. OK, what does that mean? Well, the simple fact is we care very deeply about the tools that people across industries need to use so that we can apply biology to so many more industries.

So you ask yourself, "Why has biotech been such a big thing since the 70s?" Well it's because biotech has enough capital to make these very risky bets. If we can bring the cost structure down of engineering biology by building the foundational tools -- and I'll give you an example in a second -- we can bring the tools down and we can apply this to so many other industries.

So Ginkgo focuses on: How do we make it easier to engineer biology, and we do it in two ways.

We build foundries, which is simply the process of taking bench science, pulling out discrete unit operations, wrapping software around those, and automating them on robots, instead of using a PHD scientist.

And second, collecting all the data that goes through our tests of those cells that I talked about and feeding them back into the design process.

So our efficiency, our total output, has gone up by over 60 times in the last three years, whereas our head count's gone up by 7 times.

So what's Bayer want to do? I will speak on behalf of Ginkgo because it is a separate company--

Matt: Joyn Bio, a separate company, is hyper-focused on engineering microbes to do nitrogen fixation.

Matt: ...that we would be able to address doing this together through Joyn Bio.

Simon: So helping row crops enhance the uptake of nitrogen. Sounds like a pretty good opportunity right there.

Matt: It's one of those Holy Grail opportunities for how we can use biology to improve the amount of food we produce for the world, to support a growing population, to do that with less detriment to the environment -- it's one of many great opportunities. This is one of the most clear.

Simon: Now Matt, that is a huge opportunity. We could probably stop right there. But I'm going to ask you for even more. What are a couple other opportunities outside of the agriculture industry that Ginkgo's also working on right now?

Matt: So, we look at this as a fundamental transformation in how the world will manufacture things.

Honestly, you could literally say almost every part of GDP has some part of its supply chain that should be affected by biology. So our approach is to make it easier to engineer biology, make it cheaper to engineer biology, and then figure out ways we can partner with great companies in great application areas that know that they need to bring biology into their manufacturing system. They've brought physics in, they've brought chemistry in, and they know they need to bring biology in.

So you can look at the macro changes in the environment and say, "Where are those places?" It's clearly in biofuels, which was kind of the first major arc of this industry. But now you just look at the press around, "How are we going to feed the world on a protein side?" There's a ton of new food that will be biologically driven new food that we're very interested in. We're here at Industrial Biotech because there's an ever increasing number of industrial applications from how you use enzymes and how you use biology across the spectrum.

Those are the big market opportunities. We feel like all of GDP is going to be affected. But we are also totally enthralled by the power, and frankly humbled by the power of biology every day, and we feel it's very important to respect those things, so we're very involved [in] helping the government community make sure that there's proper regulation around and proper protection around how these things are being done.

Jason, our CEO, just did a big announcement of some of our work with the national security community. Really around making sure that there's no bad actor reactions within this environment. The most fun part is we're big fans of Jurassic Park...

Matt: ...because when you see Jurassic Park, you see the power of biology, so really as a testimonial to what we do, not necessarily as a major product, a few years ago, our team went to the Harvard Botany Lab and found some extinct flower. An extinct flower that had lived many, many years ago, and sequenced the DNA and found the part of the DNA that is responsible for the scent.

We put it into some yeast, engineered that yeast to produce the terpene, which is the chemical that makes that scent, and we made perfume out of it.

Matt: So we have extinct flower perfume. It's step one of Jurassic Park. So that's what we get excited about.

Simon: Well, synthetic biology is definitely an opportunity that you should be keeping an eye on out there. And I think the Ginkgo Bioworks is a company that should be on your radar. We've got Matt McKnight here, who is the chief commercial officer of Ginkgo Bioworks.

Simon: Thanks for tuning in.

Matt: Yeah. Thanks for tuning in.

Synthetic Biology Is Becoming the Next IT Industry. Here's What Investors Need to Know @themotleyfool #stocks $BAYR.Y $INTC $ILMN Next Article
Current