Dollar General may be better positioned for the near term, but don't count out Dollar Tree over the long haul.

When Dollar General Corp. ( DG 2.87% ) and Dollar Tree Inc. ( DLTR 1.64% ) reported quarterly earnings in tandem on Aug. 30, investors reacted unfavorably to each, at least initially. Dollar General shares lost roughly 1% on Aug. 30, yet as of this writing, shares have recovered and added 4% of appreciation. Dollar Tree stock, however, dropped 15.5% during the Aug. 30 trading session, and it's recovered only 2 percentage points of value to date.

While a slight downward revision to earnings expectations disconcerts shareholders, Dollar Tree's stock-price divergence from its closely correlated competitor is a function of its chosen business model, which is exhibiting near-term stress. 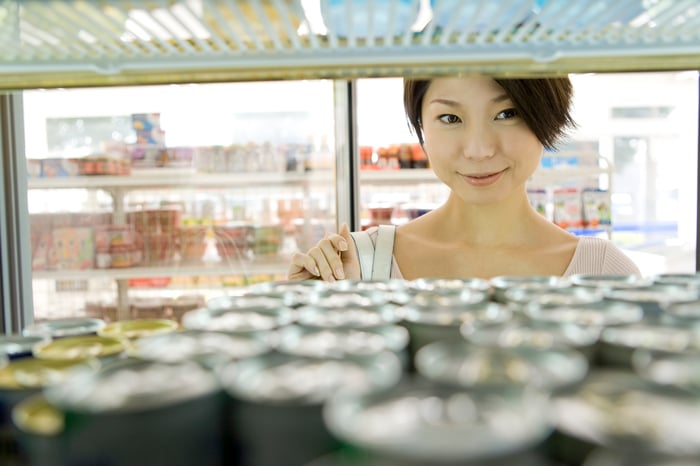 Since Dollar Tree's acquisition of Family Dollar Stores in July 2015, the organization's business has been divided into two segments, which operate under the two widely recognized banners. The Dollar Tree brand is essentially a fixed-price-point concept, in which the majority of merchandise is sold for $1. Family Dollar's pricing ranges from $1 to $10. Maintaining flexible price points in theory helps a discount retailer attract a broader range of customers, and indeed, Family Dollar seeks to win customers who have recurring, weekly needs for groceries and household products.

Dollar Tree, by contrast, attempts to draw in repeat visits through the thrill of a "treasure hunt" experience, in which inventory is turned over rapidly, and customers return out of curiosity for new bargain merchandise.

The two segments churn out roughly the same revenue. As you can see in the following table, which covers the first two fiscal quarters of 2018, total revenue of $11.1 billion was essentially split between the two brands during the first half of the year. But profitability metrics look quite different:

When Dollar Tree Inc. initially proposed the merger with Family Dollar Stores, management cited as rationale the opportunity to expand Dollar Tree's price points and realize cost synergies. During the past three years, the company has been able to lift Family Dollar's gross margin by roughly 350 basis points (the Dollar Tree segment's gross margin has remained essentially unchanged over the same period).

Yet this 3.5 percentage point improvement in gross profitability doesn't represent a huge leap. And, as the table shows, for the same amount of revenue, Family Dollar's lower gross margin and higher operating expenses cause it to contribute much less to the consolidated bottom line.

In addition to weaker profits, management has struggled to lift traffic to Family Dollar stores. In the second quarter, Dollar Tree-branded stores enjoyed a comps increase of 3.7%, while Family Dollar comps remained flat against the prior-year quarter. Part of the chain's margin and traffic woes can be attributed to the slow work of modernizing the Family Dollar concept. Dollar Tree Inc. management has closed underperforming stores, and essentially halted growth in Family Dollar retail square footage while the company tweaks and refurbishes the aging retail concept it acquired three years ago. The following table demonstrates the disparity in brand growth between the company's namesake label and Family Dollar, expressed in terms of store-count growth since the first quarter following the acquisition:

Dollar Tree might hang back from new Family Dollar expansion for a while longer. With a moderately improving economy, WalMart appears to be pulling traffic from multi-price-point discounters. WalMart reported 4.5% growth in U.S. comps in August, its highest quarterly comps gain in 10 years. The retail behemoth cited strength in grocery, seasonal, and apparel -- three categories in which Family Dollar is trying to establish bona fide customer flow.

Like Family Dollar, Dollar Tree competitor Dollar General offers a wider array of price points and doesn't hang its strategy on $1 items. Yet Dollar General never strays far from a deep value proposition: For several years running, the company has kept more than 80% of its stock-keeping units (SKUs) under $5. In this way, Dollar General is somewhat more akin to the Dollar Tree brand, keen on promoting the treasure hunt experience and turning inventory over rapidly.

Thus, over the near term, both Dollar General and the Dollar Tree-branded segment might enjoy insulation from WalMart's reach, as consumers with fatter wallets stop in for the pleasure of serendipitous bargains. Family Dollar will probably sustain a more direct line of fire. Yet if Dollar Tree Inc. maintains its long-term push to refresh the Family Dollar brand, a diversified revenue base should eventually leave a positive impact on the overall company's bottom line.