Twitter (NYSE:TWTR) stock outpaced the market last month, rising 10% compared to a 3% increase in the S&P 500, according to data provided by S&P Global Market Intelligence.

The boost has contributed to significant gains in 2018, and shares are up nearly 100% over the trailing 12 months. 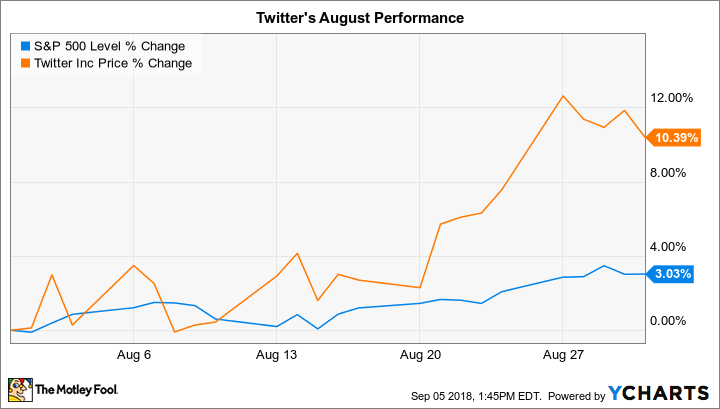 Twitter's August bounce wasn't driven by official news from the company. Instead, investors likely decided the prior month's decline was an overreaction. The social media giant had seen its shares cut by nearly 30% in July, after all.

Twitter made significant tweaks to its service during the month, too, as CEO Jack Dorsey and his team work toward removing bots that pose as human users, as well as reducing hateful or threatening speech. "We continue to invest in improving the health of the public conversation," executives said in their late-July shareholder letter, by "remov[ing] spammy and suspicious accounts."

These moves might pressure key growth metrics -- including user gains and engagement -- over the next few quarters, but they're essential to the long-term viability of the platform as a trusted place to find fresh content. After all, a higher-quality news feed for users should translate into accelerating advertising revenue growth for Twitter over time.