Starbucks Corporation (NASDAQ:SBUX) had a homecoming of sorts last week. After more than 30 years of global expansion and domination, the coffee giant opened its first store in Italy, the birthplace of espresso, and the country that inspired former CEO Howard Schultz to grow the company from a sleepy local roastery to the ubiquitous chain of cafes it is today. 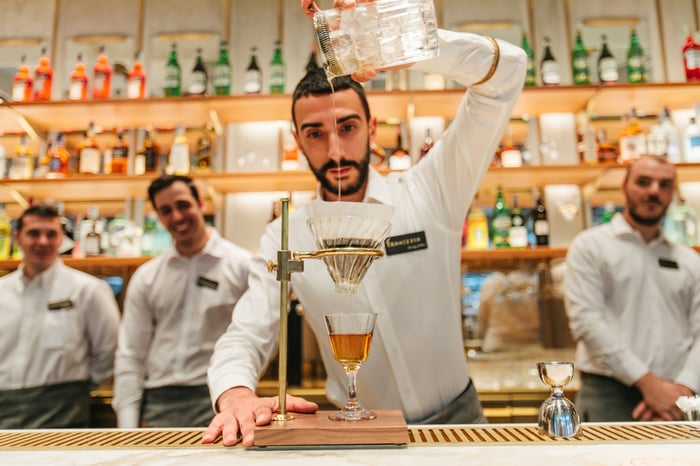 Starbucks' opening location in Milan isn't just an ordinary store. The company cut the ribbon on its third Roastery in the world, revealing the latest iteration of what Schultz has called "the Willy Wonka of coffee."

Like the roasteries already open in Seattle and Shanghai, the Milan roastery showcases every step of the roasting process, showing off the "theater of coffee" that has always appealed to Schultz. The Milan location also has special features like a one-of-a-kind 22-foot bronze roasting cask, a unique bar on the mezzanine with more than 100 cocktails on the menu, homemade gelato made with liquid nitrogen, and Princi baked goods.

And aficionados showed up for the fanfare, as the roastery drew capacity crowds at its opening with about 200 people lined up around the block, waiting to enter the store last Friday.

Starbucks' entry into Italy may be the brand's biggest test yet, especially at a time when growth has slowed in many of its markets around the world. After all, cafes are ubiquitous in Italy -- the country has about 57,000 of them, one for every 1,000 people -- and Starbucks is also charging nearly double the prices of its independent competitors.

Prior to the Milan opening, various news outlets reported that Italians were skeptical of the coffee chain's entry. The Local Italy, an English-language news site based in Italy, said readers widely panned the decision, with 87% of survey respondents saying they were against the new Starbucks. One reader compared it to opening a Taco Bell in Mexico.

Conde Nast Traveler found Italians similarly puzzled by Starbucks' entry, insisting that espresso anywhere else in the country would be better and that the practice of taking five to 10 minutes to drink an espresso standing at a cafe bar was a sacred ritual in the culture.

Then there's the question of pricing. Starbucks will charge 1.80 euros for an espresso, nearly double the single euro that Italians pay at their local bars. Starbucks believes the price reflects the premium experience the roastery offers, but many Italians balked at the higher price.

The phenomenon of an American corporation being met with a backlash abroad is nothing new. French farmers once vandalized McDonald's restaurants, seeing its fast food as an assault French culture and cuisine. However, the Golden Arches has nonetheless thrived in France and now boasts 1,400 locations there. Walt Disney Co had a similar experience when it opened Euro Disney, now Disneyland Paris, but a generation later the theme park is still drawing crowds of about 15 million annually.

The negative response from some Italians is perhaps to be expected, and pride warrants it to some extent, but the roastery should draw some locals in, at least out of curiosity, and it will likely be a magnet for tourists as the roasteries in Shanghai and Seattle have been.

The key question is if Italians will eventually stomach the higher prices for the "premium experience" and keep coming back to the Milan roastery once the novelty wears off. Starbucks also has further plans for Italy, as it expects to open four regular Starbucks in Milan by the end of the year, signaling it wants to be more than a one-hit wonder.

Starbucks doesn't need to succeed in Italy. The country of about 60 million would barely move the needle on Starbucks' financials, even if Starbucks fully penetrated its market. But establishing a following in the home of espresso would be a big win for Starbucks' brand and demonstrate that it still deserves its premium prices, while showing that it's capable of winning over even the most skeptical and sophisticated of consumers.

Starbucks could use the victory, even if it's just a moral one, as success in Italy would likely reflect strength elsewhere. The stock has struggled of late; it's traded sideways over the last three years while the S&P 500 has gained 50%. A recent guidance cut also did not inspire shareholder confidence.

Meanwhile, with Howard Schultz no longer in an official role, the company is without its own Willy Wonka to save the brand if things go sour. A bust in Milan could signal that the brand is losing its direction.