Campbell Soup (NYSE:CPB) just said the equivalent of "don't worry, we got this" to investors. Instead of selling itself to another company, as it once contemplated, the prepared foods giant plans to go it alone and try to turn itself around. That's not likely to sit well with Daniel Loeb, the billionaire hedge fund operator who advocated that Campbell put itself on the market.

Too many cooks spoiling the soup

Campbell Soup has struggled with changing consumer food tastes, leading to five straight years of declining sales. Although sales spiked 33% to $8.69 billion in the recently-ended 2018 fiscal year, that was wholly due to the acquisitions of Pacific Foods and Snyder's-Lance. Organic sales fell 3% year over year. 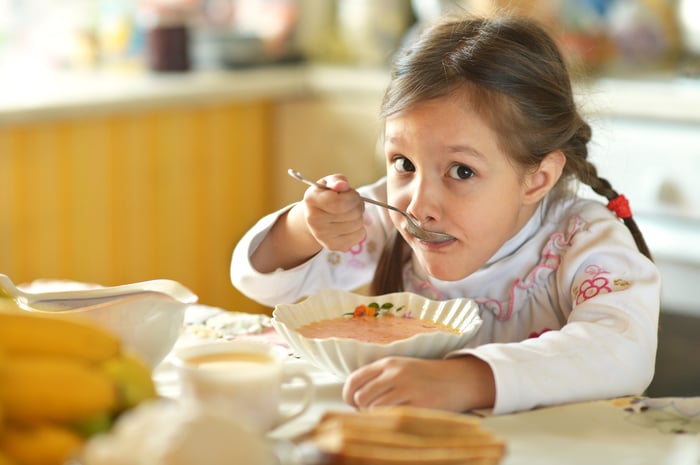 Loeb has been critical of what he deems a dysfunctional board of directors at the soup maker. He has complained that the board provided "years of abysmal oversight" while also mishandling CEO succession planning. (Former chief Denise Morrison resigned abruptly in May on the same day that Campbell released another dismal quarterly earnings report.)

Board member Keith McLoughlin was appointed interim CEO until a replacement could be found, and he announced that Campbell would undertake a complete strategic review of its operations. "Everything is on the table. There are no sacred cows," he said. Loeb said a sale was "the only justifiable outcome" of the process.

The skinny on divestment

Instead, Campbell has decided to go it alone. In late August, the company announced that it would sell its international operations and its fresh foods division while pursuing a turnaround for the rest of the business. Campbell International consists of Arnott's and the Kelsen Group, manufacturing operations in Indonesia and Malaysia, and businesses in Hong Kong and Japan. The Campbell Fresh unit includes Bolthouse Farms, which it bought in 2013 for $1.5 billion; Garden Fresh Gourmet, which was purchased two years later for $231 million; and its refrigerated soups.

These two divisions account for some $2.1 billion in annual revenue, and Campbell said it would use the proceeds from their sale to reduce its debt load. It had $8 billion of long-term debt on its balance sheet and $3.6 billion more in current liabilities as of July 29. Those were offset by just $2.3 billion of current assets.

Campbell Soup did intimate that a sale of the company is still on the table as it said it "remains open and committed to evaluating all strategic options to enhance value in the future."

An end run to a sale

Loeb is likely to seize on that. His Third Point hedge fund owns 5.65% of Campbell Soup stock, and he is reportedly trying to fill a slate of candidates to challenge the existing board, which many concede is a difficult task. Descendants of John Dorrance (who invented condensed soup at Campbell) dominate the current board, but Loeb has an ally in one of Dorrance's grandsons. Loeb has had discussions with former Campbell Soup CEO Douglas Conant and former board member William Perez about potentially joining his slate of board candidates, according to Reuters.

Selling the company might be as difficult as gaining board seats. There are few companies of sufficient size capable of buying Campbell Soup. Kraft Heinz is often brought up, but it has yet to make an offer. General Mills has also reportedly had an interest in the soup maker. Yet Campbell's poor operating results and high debt load -- and the high cost of a potential acquisition -- are difficult hurdles to get over.

On the other hand, Campbell Soup's plan to shrink itself down to a more digestible size may make Loeb's goal of selling the company easier if he gains enough of a board presence.