Shopify's (SHOP 13.85%) senior leadership team shared some key insights into its competitive strategy during the company's second-quarter earnings call. Here are the highlights for long-term shareholders.

At the center of everything

Our view is that our platform is more of a retail operating system than a software suite, and we believe this is a key part of our sustainable competitive advantage going forward.

Shopify is far more than just a package of software. The company has positioned itself at the core of its merchants' e-commerce operations, with a holistic system that provides solutions to many of the major challenges entrepreneurs face while starting and growing a successful business. As such, Shopify is well-situated to benefit from the powerful global trends of entrepreneurship and e-commerce in the years ahead.

Shopify's not frightened by a combined Adobe/Magento

Most of the reasons why someone would use Magento over Shopify are because of internal politics and poor decision making, frankly ... These are pieces of software that were written in another decade. They are, I don't think, adequate for the modern internet. They don't solve the real challenges that merchants have, and if you talk with people who are running these kinds of stores you ... usually hear a lot of conversations about replatforming ... So now, Adobe is a company I admire greatly. They have a lot of free cash flow. If they are willing to pump it all in, or much of it into Magento, maybe something interesting could come out of it. ... I can probably keep going and talk about another 50 irrelevant things about Magento. I think the main message is, I don't think it matters much.

As you can see, Lutke does not appear concerned about Adobe Systems' (ADBE 4.37%) recent acquisition of e-commerce company Magento. He went on to say that Magento has been a source of customer acquisitions for Shopify. Lutke also said that he'd welcome some more competition, to create a stronger sense of urgency among his team in order to drive faster innovation and improvement, since "there's no one else who sort of, at least, looks a little bit dangerous." I don't view this as Lutke being arrogant, but rather an accurate assessment of Shopify's leading competitive position and wide economic moat. 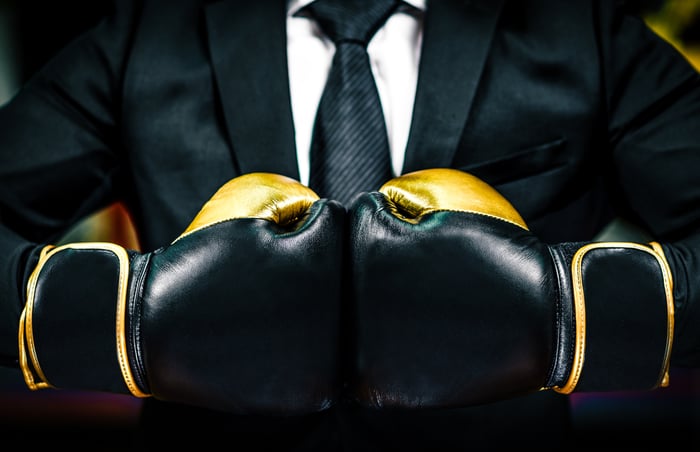 Shopify to Adobe: Bring it on. Image source: Getty Images.

Customer retention may be better than the bears think

[T]he churn, there's a lot of focus on it. And it's really -- we haven't found the right language to describe why it's simply not a problem. Like for instance, churn almost universally is actually the successful discovery of something that didn't work. So, it's a building block in this process toward being successful, creating something, just as you said.

Most bears' short theses revolve around the belief that Shopify is overstating the probability of success for its merchants, and, therefore, its own market potential. Bears also tend to harp on Shopify's decision not to disclose its churn rate -- the percentage of its customers that close their Shopify stores.

However, IFS Securities analyst Ronald Bookbinder asked an intriguing question during the call: "[I]sn't it true that entrepreneurs just aren't one-and-done type of people, that the entrepreneurs will have multiple websites as they continue to try and figure out what works for them?" Lutke "violently" agreed with Bookbinder's premise, and went on to explain how the typical entrepreneur process is to "start up a bunch of things, figure which one gets the traction, and then hopefully go all in on that one," and that it "involves a series of pivots and changes."

Essentially, Lutke is saying that the number of times people close a store is not the best way to evaluate Shopify's performance. Instead, a metric like gross merchandise volume -- the total dollar value of sales made by merchants on Shopify's platform -- is likely a better way to gauge the health of its merchant base, and by extension, Shopify's success.

The power of diversification and optionality

Diversification is critical to good investing, and this is something Shopify has in spades. This may be something casual investors miss, but our results in Q2 certainly highlighted this. Investments we made in past years, which diversified our revenue streams, are paying off. Shopify Plus had a fabulous quarter, and the resources allocated a couple of years ago to start Shopify Shipping and Shopify Capital also continue to show excellent results.

As powerful as Shopify's core platform is on its own, it's made even stronger by Shopify's ancillary services. Shopify Plus, the company's enterprise-grade service offering, has allowed it to expand its customer base from small and medium-sized businesses to large multinational corporations.

In addition, services such as Shopify Shipping -- which helps merchants choose shipping partners and track orders -- provide customers with even more value. And Shopify Capital, which makes financing available to qualified merchants, helps to accelerate their growth.

Together, this steadily expanding suite of services helps to diversify Shopify's revenue streams and reduce its risk profile, with each service reinforcing the others. Shopify also enjoys tremendous optionality in its business model, as the company's future service offerings are limited only by its employees' imagination and ability to execute their vision.