If you want the best dividend stocks, you have to have a broader focus than just dividend yield. In some cases, the most important attribute for a successful dividend stock is its ability to pay increasing amounts of dividends over long periods of time. That way, investors get the power of compounding working in their favor.

Some stocks are pretty predictable in terms of when they'll increase their dividend payouts to their investors. Trying to give at least one boost per year is a goal that many companies strive for, and a select few have put together long streaks of annual dividend hikes year in and year out. For Nike (NYSE:NKE), Nucor (NYSE:NUE), and Lockheed Martin (NYSE:LMT), it would be a big surprise if shareholders didn't see a dividend increase between now and year end.

Give your dividends a swoosh

Nike was a pioneer in the athletic apparel and footwear market, and its shoes are now among the most popular in the world. Even though the company has faced increasing competition from rivals both internationally and in the U.S. market in recent years, Nike has fought back by returning to its roots, grabbing up high-profile athletes for endorsements and using their star power to bring the company success. Even with recent controversy surrounding its newest advertising campaign -- or perhaps because of it -- Nike is getting a lot of attention from shoppers. 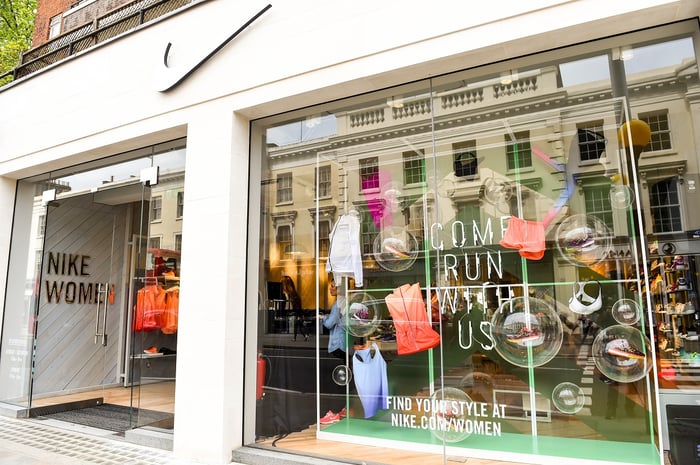 Dividend investors haven't necessarily paid a whole lot of attention to Nike, as its current dividend yield is less than 1%. That makes it one of the lowest-yielding stocks in the Dow Jones Industrials, as well as trailing the average in the broader market by about half. Yet Nike has made a habit of trying to remedy that situation, with 16 straight years of annual dividend increases that typically come late in the year. Since it has been paying less than a third of its earnings to shareholders as dividends, there's every reason to believe that Nike should be able to follow up on its 11% dividend increase in December 2017 and keep delivering healthy income to investors.

For those who prefer higher yields, steelmaker Nucor gets into the right ballpark. The stock's current yield of 2.4% is above the market average, and even more impressive is the company's 45-year track record of delivering annual dividend increases to its shareholders. That's especially impressive when you consider just how much volatility there's been in the steel industry, with many players having gotten pushed to the brink of bankruptcy during the worst years in recent decades.

Unfortunately, where Nucor is a bit stingy is in how much of an increase it gives to its investors. In each of the past eight years, Nucor has given shareholders a boost of just $0.0025 per share right at the end of the year, amounting to less than a 1% increase. Investors hope that 2018's dividend increase will be different, as Nucor has enjoyed strong financial performance that could support a bigger payout. If continued high demand can overcome any pressure from trade tensions in the steel market, then Nucor could find itself in the best possible position to profit.

Lockheed Martin rounds out the list, as the defense contractor has been doing quite well lately. Although the company has gotten the most attention for its F-35 stealth fighter jet program, Lockheed has also kept selling stalwarts like its F-16 Falcon fighter. With contracts both in the U.S. and around the world worth billions, Lockheed is doing its best to win its fair share of business going forward.

From a dividend perspective, Lockheed Martin's yield of 2.4% reflects its solid history, and for 15 straight years, the defense contractor has increased its payout. Although the payments are usually made until the end of the year, investors typically know by the end of September exactly how big the coming year's dividend will be. With increases of roughly 10% in each of the past three years, it's a reasonable assumption for shareholders to expect their dividends to rise from $2 per share to $2.20 on a quarterly basis going forward.

Investors in top dividend stocks look forward to hearing that they'll receive more money, and these three stocks have done a good job of delivering the goods for a long time. That doesn't make dividend increases an absolute sure thing, but it does give investors confidence that barring some unforeseen incident, larger payments will be on the way shortly.