The iPhone maker is reshaping the wearables market at Fitbit’s expense.

Worldwide wearables shipments grew 5.5% annually to 27.9 million during the second quarter, according to research firm IDC. A higher mix of pricier smartwatches boosted the segment's dollar value by 8.3% to $4.8 billion.

Apple ( AAPL -1.17% ) retained its position as the market leader, thanks to strong demand for its LTE-enabled Apple Watch, according to IDC. The recent introduction of watchOS 5 and the upcoming launch of the Apple Watch 4 could widen that lead. 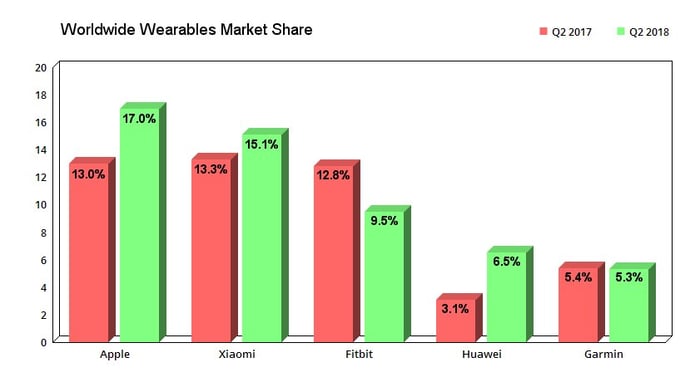 Xiaomi ( XIACY ) ( XIACF -0.91% ) ( 1810 -2.54% ) continued to dominate the low-end market with its Mi Band devices, which cost less than $30. The company also recently diversified its portfolio with children's smartwatches and shoes.

Fitbit ( FIT ), which lost its crown to Apple last year, continues to lose market share due to waning demand for basic and mid-range fitness trackers. It was also the only market leader to post a year-over-year drop in shipments. However, IDC said that Fitbit's Versa smartwatch was still the world's "second largest smartwatch brand" with 1.1 million units shipped.

There's still plenty of room for all these companies to grow -- IDC expects wearable shipments to rise from 124.9 million this year to 199.8 million by 2022.

Why Freshworks Stock Plummeted 29.9% in November

Zillow Bets on Itself After Winding Down iBuying