Profits are rising, and could rise even more, but the stock hasn't responded as expected.

Nine months ago, I recommended Rio Tinto (RIO 1.16%) (RIO 0.36%) stock as it stood on the cusp of (what I though was) a rebound in "global demand for iron ore." Sales were surging and profits on the rise, and Rio Tinto looked to me like a good bet at a valuation of just 13.3 times earnings.

Nine months later, things haven't worked out quite as planned. Sales continued to grow, and profits at this metals miner ran up even higher, and even faster, than I predicted -- but Rio Tinto's stock price has gone up barely 4% versus twice as big gains for the S&P 500.

However, one analyst thinks that's great news for new investors. 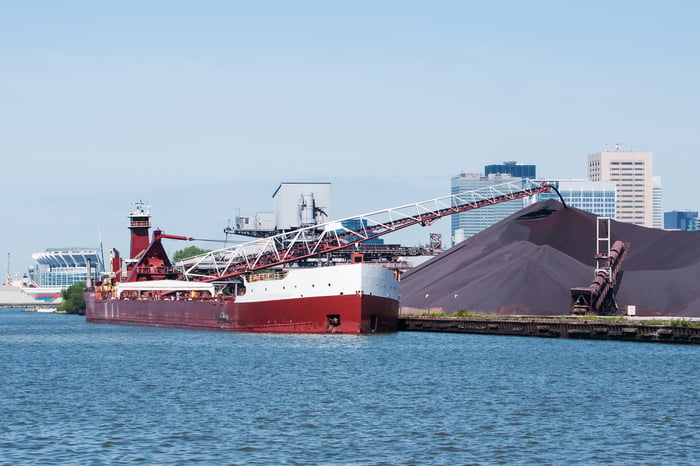 Is it time to load back up on Rio Tinto stock? Image source: Getty Images.

This morning, investment banker JPMorgan announced it is upgrading shares of Rio Tinto to outperform. Despite cutting its price target on the stock to 48.5 GBP (about 63.19 U.S. dollars) itself, JPMorgan believes investors are undervaluing the shares by pricing them below $47 a share, as the analyst explains in a note on StreetInsider.com this morning.

Chinese positives for a London stock

The market for iron ore is turning "positive" once again, helped by Chinese investment in infrastructure and a recent change in policy toward fiscal loosening, says the analyst. This should be good news for Rio Tinto, because iron ore production is the company's biggest stock in trade. According to data from S&P Global Market Intelligence, iron ore production generated $18.25 billion in revenue for Rio Tinto last year -- more than 45% of its total revenue stream.

That was 25% year-over-year growth in iron revenues for the company, faster than Rio's total sales growth for the year -- 18.5%. This year, things have slowed down a bit, with iron ore revenues growing only 5%, and overall sales growth up only 3% -- hurt in part by "a 12-month pause" in major infrastructure projects in China. South China Morning Post, however, reports that China is now planning to begin "a series of major urban infrastructure projects" to goose its economy's growth rate. By increasing demand for steel, and therefore for iron ore to make steel, this policy promises to amp up Rio Tinto's own rate growth going forward.

How fast can Rio Tinto grow?

So, how did that work out?

In actual fact, Rio Tinto generated GAAP net income of $8.8 billion (one-third better than I had hoped) and $9.4 billion in free cash flow -- also ahead of my projection. With the falloff in growth in this year's first half, the company's trailing-12-month free cash flow tally has fallen a bit, to $7.7 billion. However, GAAP profits are still growing (up to $9.8 billion for the last 12 months).

If that happens, though, it may catch Wall Street by surprise.

Currently, S&P Global estimates show some confusion among Wall Street analysts, with forecasts ranging from a prediction of 5% annual profit declines for Rio Tinto over the next five years, to 15% annual increases in profits over the next five years. Average those two rates together, and it appears analysts have moderated their expectations from the average 12% rate projected late last year. Still, with Rio Tinto selling for only about 7.9 times trailing earnings today, and paying a 6.1% dividend yield, I think the stock is already bargain-priced if it grows no faster than 10%.

On the other hand, if JPMorgan is right -- if I am right -- about Chinese policy being set to return Rio to even higher levels of growth, the stock could be an even bigger bargain than it appears. For this reason, I believe JPMorgan is right to recommend Rio Tinto stock.