Please ensure Javascript is enabled for purposes of website accessibility
Free Article Join Over 1 Million Premium Members And Get More In-Depth Stock Guidance and Research
By Adam Levy - Sep 11, 2018 at 11:00AM

Will it have the same negative impact on profitability?

T-Mobile ( TMUS -1.92% ) acquired Layer3 TV late last year, opening the door for a bundle of phone, television, and potentially home internet service. At the time, T-Mobile COO Mike Sievert said, "We sure won't be inspired by the bundles we've seen from companies like AT&T ( T -2.63% )."

However, early tests of Layer3 TV in select markets are showing very similar deals to what AT&T offers with DirecTV. T-Mobile is offering discounts between $20 and $40 for certain Layer3 TV packages if you're also a T-Mobile phone subscriber.

AT&T used to offer unlimited data plan customers a $15 discount on any DirecTV product, including its over-the-top DirecTV Now service. It shifted that strategy to a forced bundle of its new skinny bundle, WatchTV, and higher prices for mobile customers.

AT&T's discount strategy worked to sign up new video subscribers, but it seems to have come at the cost of profits for its entertainment segment. Should T-Mobile investors worry that it's marching down a similar path with bundled discounts for Layer3 TV customers? 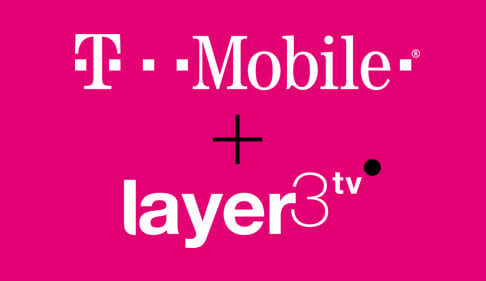 The impact of AT&T's strategy

AT&T's DirecTV Now and its bundling strategy had a noticeable impact on its business over the past year or so.

After acquiring DirecTV, AT&T became the country's largest pay-TV provider. As such, it was more susceptible than anyone to the trend of cord-cutting. Bundling was a way to keep customers loyal both as wireless and television customers.

And the strategy seems to have worked. AT&T saw its postpaid phone churn rate fall considerably, and it has added video subscribers in each of the last three quarters.

AT&T says the bundle is working for it, and its move to include WatchTV in its unlimited plans indicates the company's noted some positive effects of bundling video on phone subscriber churn. Without the bundle, AT&T might be losing more subscribers as new virtual pay-TV providers continue to take share from traditional pay-TV, but there's still a noticeable negative impact on the company's profitability.

Will T-Mobile suffer a similar fate?

There are two key differences between T-Mobile and AT&T that makes bundling a more appealing strategy for T-Mobile.

First of all, Layer3 TV's service is a premium pay-TV option. The service regularly costs $100 to $120 per month. That's more comparable to a high-end DirecTV subscription than an over-the-top DirecTV Now package. DirecTV Now starts at just $35 per month before discounts.

Layer3 likely has a bit more margin built into its pricing than AT&T's over-the-top effort. So, giving T-Mobile customers a discount means T-Mobile may still be able to generate a profit on new subscribers, or at least break even.

Additionally, Layer3 is a very small pay-TV provider. As mentioned, AT&T is the largest in the nation. T-Mobile still has a lot to benefit from scaling Layer3, and it's willing to sacrifice margin for scale at this point. T-Mobile has taken this exact approach with its wireless service over the last six years.

While T-Mobile might be sacrificing some profit margin on its pay-TV subscribers, it's not coming at the expense of higher-revenue and higher-margin subscribers already using one of its services. So the bundling strategy for T-Mobile with Layer3 TV should provide considerable upside for the company long-term.