One of this year's biggest surprises is Pandora (NYSE:P). The streaming music pioneer has seen its stock soar 96% this year, more than doubling since bottoming out in late January. The stock hit yet another 52-week high on Tuesday.

It has generally been a good year for online services, but Pandora's spike is turning heads because the digital music specialist isn't exactly killing it when it comes to its fundamentals. Pandora's user base continues to contract, and profitability remains elusive. It's doing a good job of milking more revenue out of its audience, but squeezing blood from a stone is challenging when the rock is becoming a pebble. The stock is doing better than its platform, but this doesn't mean that the rally is over. 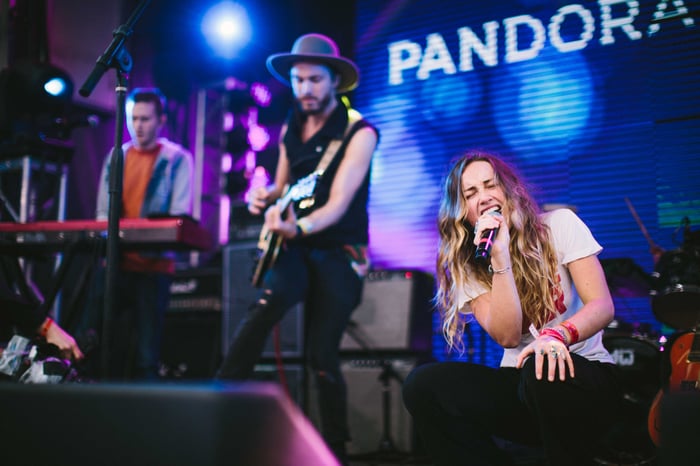 Cranking up the volume

Pandora has a popularity problem. It has seen its active listener base shrink from 76 million to 71.4 million over the past year. This isn't a fluke. Users have contracted every year since peaking at 81.5 million in 2014. The industry itself isn't going the wrong way. The country's two leading premium streaming platforms -- with tens of millions of paying users apiece -- are both growing at heady rates.

Pandora's excelling at making the best of a bad situation. It's rolling out different premium offerings, and we've seen subscription revenue soar 67% over the past year. Pandora is also getting advertisers to pay more for the freeloaders that continue to make up the lion's share of its listenership.

The combination of accelerating subscription revenue -- even if we're talking about less than 10% of it current user base -- and improving ad sales are helping offset the net defections. Adjusted revenue rose 12% in its latest quarter if we back out the event ticketing business it sold off and the international operations that it closed down.

The growth isn't sustainable if listeners keep bolting for rival offerings, and profitability is at least three years away, according to analyst models. However, the stock is clearly back in favor. It could be a case of the rising bullish tide for rival streaming services lifting all ships. One can also argue that the bullishness is also making Pandora a more viable buyout candidate.

We're now more than a year removed from when Sirius XM Radio (NASDAQ:SIRI) abandoned plans to buy Pandora outright, taking a minority stake instead. Now that streaming stocks in general and Pandora in particular are hot again, it wouldn't be a surprise if Sirius XM or any tech giant wanting an audience of more than 70 million streaming accounts snaps up Pandora.

The company may not come cheap as an acquisition now that its shareholders have rediscovered the lost swagger, but it's hard to fathom a hard pass on a legitimate buyout at a healthy premium. Pandora knows that listeners will continue to leave, making it harder to achieve profitability down the line. It may never get a deal as good as it will right now.

Pandora won't double again as a buyout candidate. Momentum helps, but it's holding a weak hand. The stock can keep moving higher from here, but investors need to be realistic in sizing up the stock's appreciation potential.