The Trade Desk (NASDAQ:TTD), a programmatic digital ad-buying platform, is running a radical ad in The New York Times, The Wall Street Journal, and the San Jose Mercury News to drive home what makes digital ads so much more compelling than traditional ads. "Possibly the worst ad we'll ever run," reads one of the full-page ads in all capital letters. Of course, the ad explains in smaller print on the bottom half of the page that there's a better, "more targeted, data-driven approach...."

The ads spotlight The Trade Desk's data-driven value proposition for marketers -- a value proposition that's helping the ad-buying platform see surging growth as advertisers ramp up their spending on the platform. 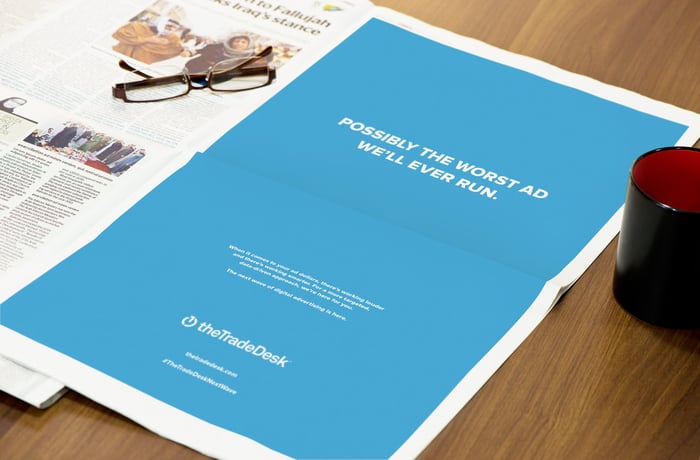 "Sometimes on an average day, you are sitting in a meeting and an idea is presented that is so good, it's hard to focus on anything else," The Trade Desk said about the new ad campaign in a blog post this week. "We had that reaction when we saw this print execution. And we thought 'why not?'"

The three ads, developed by ad agency VSA, each include their own bold statement about why print ads are so much worse than the data-driven approach its ad-buying platform enables marketers at advertising agencies to run. One ad reads, "Buying this ad was excruciating." Another says, "This pretty much goes against everything we believe."

Each ad complements these bold statements with an explanation in smaller print that points readers to The Trade Desk's ad-buying platform. For instance, one of the ads says:

We stand for advertising delivered only to the customers you want to reach. This is not that. We hope we've made our point, because there's no way we're doing this again.

The next wave of digital advertising is here.

"The next wave" really is here

While calling The Trade Desk's superior alternative to print ads "the next wave of digital advertising" may sound cliche, a look at The Trade Desk's mind-boggling momentum suggests the audacious words may not be an understatement.