One of Tuesday's biggest winners is a blast from the past. China's Renren (NYSE:RENN) saw its shares soar 57.7% on Tuesday, skyrocketing after posting financial results that aren't as good as they might seem at first glance.

Renren's second quarter was certainly a head turner. Revenue soared 582% for the period. However, the business model has shifted dramatically over the past year. Used auto sales -- a segment that it just entered during the springtime of last year -- accounts for 91% of the $135 million in revenue and more than all of its top-line growth. Losses are growing. Investors might have been pleasantly surprised by the stellar revenue growth in a stock that the market had left for dead, but holding on to Tuesday's gains and building on them won't be easy. 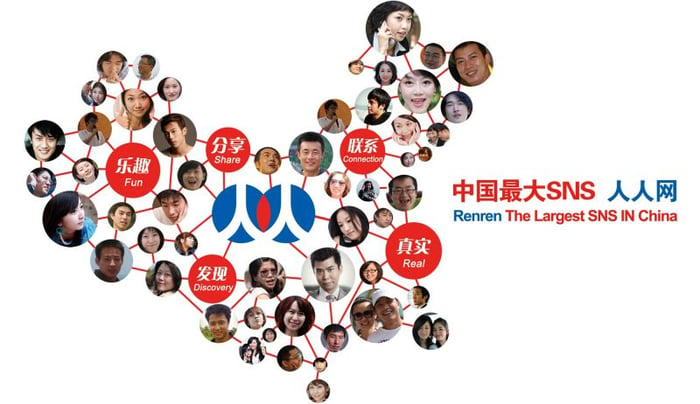 Checking under the hood

Renren raised $740 million seven years ago when it went public at $14, getting attention as a social networking website operator in the world's most populous nation. Despite China's short leash when it comes to online companies and a nascent social networking market still trying to define leadership, the shares were as high as $24 on its first day of trading.

It has been mostly downhill ever since. There are more than 1.1 billion ordinary shares of Renren, and with each American depositary share representing 15 of those shares, we're looking at a market cap of roughly $160 million even after Tuesday's pop. In short, Renren is worth less than a quarter of the money it raised in its 2011 IPO.

Usage of Renren's namesake social hub and revenue peaked in 2012. The brief bursts of upticks on the top line have been mostly the handiwork of new ventures, including auto financing three years ago and pre-owned car sales now, and have proven to be short-lived. The stock may spike when speculative news hits -- like the 76% day pop during the first two trading days of this year on cryptocurrency buzz, or Tuesday's surge -- but the freshness inevitably grows stale.

Nobody is buying Renren as a low-margin seller of pre-owned cars, and certainly not one that's sustaining widening losses in the process. It also doesn't help that Renren's guidance for the current quarter points to a sequential decline in revenue.

A silver lining here is that it wasn't just secondhand-car sales propping up the top line. Renren's internet value-added services rose 19% to $12.1 million during the period on the strength of its mobile live streaming service and software-as-a-service business. Growth there wasn't enough to offset a sharp decline in the auto financing business that was the brief growth driver in early 2016, but it's better than having all of its eggs in the used-auto basket.

Renren also has a strong net-cash position on its balance sheet, something that will help it keep going from growth initiative to growth initiative until it finds one that sticks. Renren's big pop on Tuesday wasn't warranted, but it doesn't mean that the stock doesn't still have time to eventually get it right.